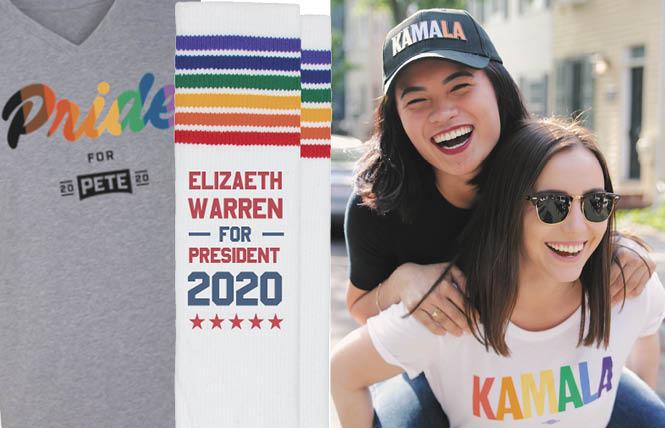 Pete Buttigieg, Elizabeth Warren, and Kamala Harris are three of the many Democratic presidential candidates that have Pride-themed gear on their websites.

A number of Democratic presidential contenders are hawking Pride-branded gear to their supporters as the annual LGBT celebrations heat up this month. President Donald Trump's campaign also rolled out a Pride shirt, eliciting global hackles due to his administration's dismantling of various federal LGBT protections.

There are now 23 official Democratic candidates seeking to become their party's nominee next year to take on Trump and block him from securing four more years as leader of the free world. More than half flew into San Francisco this week to attend the California Democratic Party's annual convention, curry favor with party insiders, and scoop up donations at various fundraising events.

The limited edition campaign merchandise targeted at LGBT supporters largely uses the colors of the rainbow flag in the designs of the T-shirts, tank tops, buttons, and bumper stickers. A few candidates, such as Pete Buttigieg, are also selling clothing that sports the hues of the transgender pride flag.

In the case of Buttigieg, he has received some flak via social media for using the version of the rainbow flag that includes black and brown stripes representing people of color. One commenter on gay website Queerty wrote he "was eager to buy and promote until I saw that they're using the absurd Oppression Olympics version of the rainbow flag with the needlessly added black and brown stripes. Class, can you say 'pandering'?"

Seeking to become the first out LGBT presidential candidate of either of the country's two main political parties, the Democratic mayor of South Bend, Indiana, to no surprise, has the most extensive selection of Pride gear. More shockingly, several of the items for sale downplay his campaign logo in favor of promoting the fact that this year marks the 50th anniversary of the Stonewall riots at the New York City gay bar that birthed the creation of the first Pride events a year later.

Fans of the married candidate, who has become a media darling this spring, can purchase a 50th Anniversary Of Stonewall Tank ($30) that focuses on the historic event in the front and features a small version of his "20Pete20" campaign logo on the top of the back at https://store.peteforamerica.com/collections/pride . According to the website, the campaign will donate "all proceeds" from the Stonewall merchandise "to organizations working to advance the rights of transgender people across America."

There are also T-shirts that depict the campaign logo using either the rainbow or trans flag colors ($25), a five pack of Pride rally signs ($15), a set of eight temporary tattoos ($10), and sticker ($4) or button ($6) packs. The five-pack Pride bumper stickers had sold out as of this week.

Playing off the fact his last name is difficult to pronounce, Buttigieg is also selling tanks ($30) and a drawstring backpack ($15) that sound out how to say his surname "BOOT-EDGE-EDGE" in rainbow letting.

California's junior senator, Kamala Harris, chose to feature either her first name — spelled out using the rainbow flag colors — or the adjective "fearless" — written out using the two additional POC colors — on shirts ($29.99-$31.99), hats ($29.99), tote bags ($24.99), and iron-on patches ($9.99) in her "Pride for the People" section on her campaign store at https://store.kamalaharris.org/pride-for-the-people .

In an email sent to supporters in early May, Harris' campaign touted the fact that the former San Francisco district attorney "has been at the forefront" of several tough civil rights battles on behalf of the LGBTQ community.

"One of the reasons our team is working to make sure Kamala is our next president is because of the role she has played in that fight," read the email. "She led the team that helped bring down Proposition 8 in 2013 and made sure marriage equality was the law of the land. And she conducted some of California's first same-sex marriages way back in 2004."

Also utilizing the POC Pride flag colors is New Jersey Senator Cory Booker. His https://shop.corybooker.com/pride/ site is selling T-shirts ($30) that say "Justice for all" using those colors as well as those of the trans flag. He also has shirts ($30), stickers and button two-packs ($4) that say "Cory2020" in both flag color schemes.

Minnesota Senator Amy Klobuchar is also using the POC Pride flag colors on T-shirts ($29), button ($5) and sticker ($4) two-packs that read "Amy for America." Also for sale on her Pride shop at https://store.amyklobuchar.com/pride/ are tote bags ($29) and shirts that say "Equality For All Amy For America."

Unique for any of the candidates, Klobuchar is also selling Spanish-language T-shirts and tank tops ($29) that say "Igualdad" spelled out in the POC Pride flag colors.

The campaign of Senator Elizabeth Warren of Massachusetts recently emailed her supporters to alert them of her Pride gear going on sale at https://shop.elizabethwarren.com/collections/pride-gear . Her collection sticks to the traditional Pride flag colors and also comes in trans flag colors.

"Elizabeth won't stop fighting until everyone is free to be who they are and love who they love," read the email. "Dream Big. Fight Hard. Live Proud."

Independent Vermont Senator Bernie Sanders is selling buttons ($5) and shirts ($27) that swap out the black stripe on the POC Pride flag for a gray one, apparently done due to the usage of a black background on the shirt and button. His campaign store — https://store.berniesanders.com/collections/pride — also has various items sporting his first name spelled out using the traditional rainbow flag colors with a star dotting the "i."

Former Vice President Joe Biden, as of now seen as the Democratic front runner, has some of the most uniquely designed Pride gear for sale at https://store.joebiden.com/ . One button in his four-pack ($10) features his image in his trademark aviator sunglasses with a rainbow-colored banner behind him. Others use just his first name with the "e" depicted in either the rainbow or trans flag colors.

Those logos can also be bought on T-shirts ($27), or there are ones that say "Biden President" or "Pride" with the "e" in Biden and Pride drawn in the rainbow colors. The Pride version can be bought in a tank top version that has blue lining. Then there is the "aviator tank" ($27) that has three aviator sunglasses atop each other in the rainbow colors and his campaign website address on the top of the backside.

From tanks to tees — #TeamJoe has got you covered for all things #Pride! Head to https://t.co/ZXK3zwPphr to find everything you'll need to show your pride this June. pic.twitter.com/j6M0QJsS8D— Team Joe (@TeamJoe) May 24, 2019

Washington Governor Jay Inslee is using a design that features a rainbow with his tagline "Inslee Our Moment." It is featured on shirts ($25), totes ($28) and button two-packs ($4) on sale at https://store.jayinslee.com/.

Perhaps the most odd Pride items for sale come from former Texas congressman Beto O'Rourke. At his site — https://store.betoorourke.com/pride/ — backers of the failed 2018 Lone Star State U.S. Senate candidate can buy shirts and tote bags ($30) or button two-packs and stickers ($5) that say, "Beto For Everyone" in white letters atop a rainbow-colored stripe background with a red heart punctuation mark.

New York Senator Kirsten Gillibrand is selling T-shirts ($30) sporting the slogan "Brave+Proud" in the rainbow and trans flag colors at https://store.kirstengillibrand.com/collections/pride . There are also shirts touting "Love is Brave" in the rainbow colors and stickers ($5) of both slogans.

As for Trump, his campaign is selling a T-shirt that says "LGBTQ for Trump" over a rainbow background. As of Friday it was on sale for $24, a price cut from its original $30.

The only other declared Republican candidate, former Massachusetts governor William Weld, does not have a store on his site.

The fact the president is hawking any Pride gear has drawn rebukes from LGBT rights advocates due to his administration's trampling of protections for the community adopted by his predecessor, President Barack Obama. As the Bay Area Reporter pointed out in a story Thursday, the U.S. Department of Health and Human Services last month proposed to revise regulations under the Affordable Care Act that would allow discrimination based on gender identity in health care.

Also in May, HHS finalized a rule to enable health care providers to refuse certain services by citing personal religious and moral beliefs. And the Department of Housing and Urban Development proposed a rule to allow homeless shelters receiving federal funds to turn away transgender people seeking help.