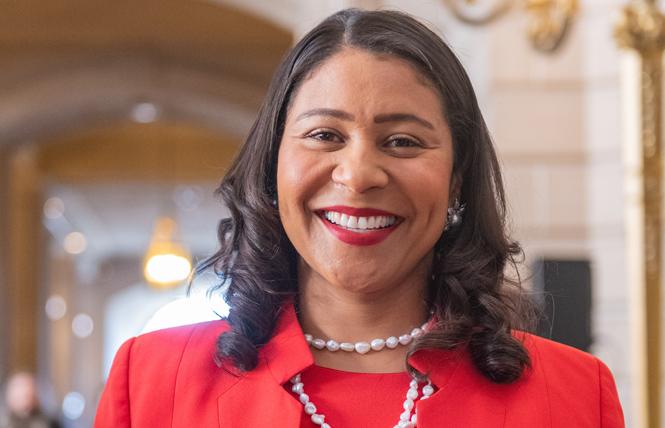 San Francisco Mayor London Breed has proposed more than $3 million over the next two years for transgender initiatives and LGBTQ services, including $2 million specifically earmarked for housing subsidies for transgender and gender-nonconforming individuals.

The proposal is in Breed's two-year budget plan, which she is expected to release Friday, May 31.

The announcement reflects the goals of Our Trans Home SF, a proposal by trans advocates and the city's Office of Transgender Initiatives. The Bay Area Reporter previously reported that Our Trans Home SF requested close to $1 million for the housing subsidies.

With the city's two-year budget cycle, that appears to be what the mayor incorporated into her spending blueprint. The $2 million will fund a two-year pilot program to provide housing subsidies to 75 transgender individuals, according to the mayor's office, which said the funding would create the first program of its kind in the nation.

"We are inspired and grateful for Mayor Breed's ongoing commitment to our trans and LGBTQ communities," Clair Farley, director of the Office of Transgender Initiatives, said in a statement released by the mayor's office. "Trans communities have spearheaded a call for TGNC-specific housing programs through the Our Trans Home SF campaign to assure TGNC individuals can find and keep their housing."

Farley also said that "one out of two TGNC San Franciscans have experienced homelessness."

"When TGNC San Franciscans do experience homelessness, there is no safe places for us to go," Farley, a trans woman, added.

Another part of the mayor's proposal is to launch an LGBTQ Host Homes program through the Department of Homelessness and Supportive Housing. It's an initiative for transitional aged youth, or TAY, and will be operated by the San Francisco LGBT Community Center, the mayor's office stated.

The center will connect youth experiencing homelessness to safe and stable housing with adult hosts in the community, utilizing existing housing stock. Assistance will be available for between three and 12 months, the mayor's office stated.

"For decades, San Franciscans have opened their homes to provide shelter and support to LGBTQ youth who have been rejected by their families of origin," said Roberto Ordeñana, deputy executive director of the SF LGBT center in an email to the B.A.R.

"Investment in the SF LGBT Center's Host Homes program allows us to create a solid structure and framework to build off this cultural tradition and leverage the power of community. With this launch, we will immediately reduce the impact of homelessness on participating LGBTQ youth aged 18 to 24, while we continue to collaborate with the city and our partners to ensure that San Francisco has a wide range of services to improve housing options that meet the growing demand from some of the most vulnerable members of our community," Ordeñana said.

Gay District 8 Supervisor Rafael Mandelman told the B.A.R in an emailed reply that he supports the mayor's funding request for the various programs. He noted that the needs were a focal point during a recent hearing he called to see how city departments were collecting sexual orientation and gender identity data in order to meet the needs of the city's LGBTQ community.

"Our trans community is disproportionately impacted by our housing and homelessness crisis but hasn't gotten the support they need from City Hall. Trans and gender non-conforming San Franciscans made their demands for housing clear with the Our Trans Home SF campaign, and I'm grateful to the mayor for hearing the call and supporting the urgent housing needs of this community."

"Transgender and gender-nonconforming San Franciscans are almost 18 times more likely to experience homelessness than the general population in our city," Breed said in the release. "Housing subsidies and navigation services for our city's trans community will help individuals remain housed and will provide a much-needed safety net for those who are at risk of homelessness.

"With the ongoing affordability crisis in our city and the constant attacks on trans people from the White House we must remain united to make sure no one is erased," Breed added, referring to multiple attacks on the trans community from the Trump administration. "This budget proposal shows that we're committed to keeping our communities housed and assuring our most vulnerable residents can thrive in San Francisco."

Other items in Breed's budget document include a new training officer for the Office of Transgender Initiatives to implement Breed's executive directive to track the expansion of gender options on all city forms and provide trans inclusion training to city employees who work with the public; establishing an ongoing LGBTQ immigrant fellowship program through the trans initiatives office; and continuing to backfill federal HIV funding cuts and supporting the city's Getting to Zero initiative to reduce HIV transmission.

The announcement follows a year of planning from Breed regarding the prioritization of the needs of queer and trans youth specifically on the issue of homelessness in this population, and delivering on promises made by the late Mayor Ed Lee.

Updated: 5/29/19: This article was updated to include comment from Supervisor Mandelman.

Updated: 5/30/19: This article was updated to include comment from Roberto Ordeñana, deputy executive director of the SF LGBT center.