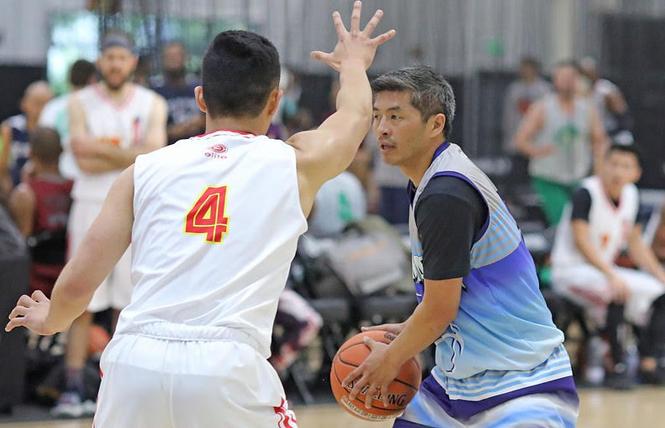 The National Gay Basketball Association is hoping to have a world championship meet next year. Photo: Courtesy NGBA

Mark Chambers of southern California has been a leader in gay basketball for decades. He's played in multiple Gay Games and is a founder of the National Gay Basketball Association. Now, his dream to have the international LGBT basketball community to come together more often seems to be about to come true with the launch of the World Gay Basketball Championships next year in southern Florida.

"Having been a longtime ballplayer and being able to meet other LGBT players every four years at the Gay Games, I wanted to see if I could bring together people biennially," Chambers told the Bay Area Reporter. "This will be the first time LGBTQ+ players from across the world will meet outside the Gay Games."

The 2020 championships are scheduled for May 24-29 to be held in DS Sports Plex in Deerfield Beach, Florida, just north of Fort Lauderdale.

Initially, Chambers said, the championship is expected to be held quadrennially during even-number years that fall between Gay Games. If enough support is generated he hopes to cover the other years as well.

"We got a grant from Nike for this year and we have people working on getting sponsorships for the event," Chambers said. "We'll see if this is a pipe dream or the response I was hoping for."

Chambers said the $25,000 grant will be used for seed money for the tournament and it marks the first time NGBA has received funding from a company.

Chambers is organizing the event with fellow volunteers from NGBA. Based on talks with the Federation of Gay Games, he projects the tournament may draw about 500 athletes from 13 or more countries.

"I put it out there on Facebook," Chambers, 54, said. "We got good responses from Australia, Argentina, Paris, London, Japan, and China."

Players and teams may register in the women's category or the all-gender category. The eight skill-level divisions will be Open, A and B+; Competitive, B and B-; Recreational, C and D; 40+ Masters; and 50+ Seniors. The skill level brackets in the women's division will depend on registration numbers, and the seniors play may be turned into 3-on-3 half-court games if necessary.

Players can have seven to 12 people on their squads. Online early registration runs June 1-October 31, with player fees of $100. That jumps to $125 November 1-January 31. Details of late registration are not yet known. Team captains can pre-register teams for $50 during June.

For registration and other information, visit www.gaybasketball.org.