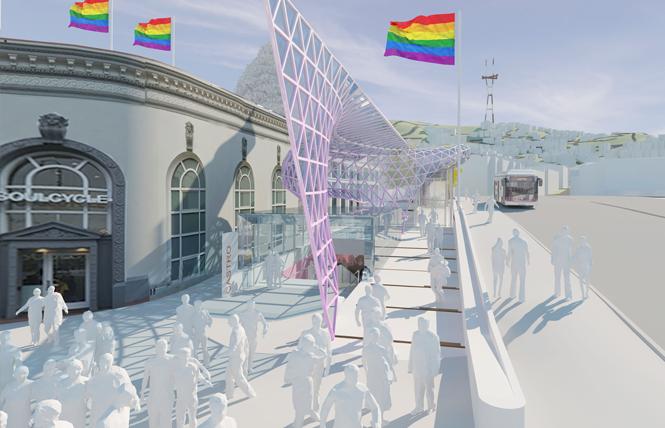 The architectural firm overseeing the proposed revamp for Harvey Milk Plaza has refined its vision for a sweeping canopy element that is a focal point of its design.

The reworked structure being crafted by Perkins Eastman's San Francisco office will be officially unveiled Sunday, May 19, at a special event in the Castro to coincide with the gay district's annual celebration of Harvey Milk Day. A new aerial flyover video of the project will also be shown that day.

By winning a supervisor seat in 1977, Milk became the first openly gay person to win elective office both in San Francisco and California. He was assassinated a year later on the morning of November 27, 1978 along with then-mayor George Moscone inside City Hall by disgruntled former supervisor Dan White.

In 1985, city leaders dedicated the plaza above the Castro Muni Station as a memorial to Milk, a daily transit rider and vocal advocate for public transportation. Situated at the corner of Castro and Market streets, the plaza is considered the front door into the city's gayborhood.

But the windswept, sunken area is a largely uninviting space rarely used by the public other than for special events and protests. It has also become a gathering spot for homeless individuals.

The current plans for the area call for raising the terraced gardens to street level and creating a new belowground exhibit space adjacent to the Muni fair gates where Milk's story could be told. Estimated to cost at least $11 million, the proposal has been controversial from the start and is opposed by the architect that initially designed it, Howard Grant, who later came out of the closet as gay.

Others have voiced concern that the canopy will obstruct views of the 1922 Beaux-Arts building at 400 Castro Street, designed by Edward Foulkes, and a mural painted on it that depicts a historic Victorian across the street.

As the Bay Area Reporter reported in December, the firm jettisoned a cantilevered amphitheater that was widely derided in favor of the artistic overhead structure following feedback from the city's arts commissioners. They recently met with members of the oversight body to show them the latest iteration of the canopy.

"In December what you saw was basically a scribble. They developed it a little further so it looks like a real idea in the renderings," explained Brian Springfield, a local architect based in the Castro who is a member of the Friends of Harvey Milk Plaza group pushing for the reimagining of the public parklet.

In the revised designs and video, the support structure is rendered in pink and cut into triangular shapes, reminiscent of the LGBT community's lambda symbol, holding up see-through panels. It appears to be billowing in the wind like the adjacent oversized rainbow flag currently installed at the plaza.

Springfield stressed that it is still far from being the final design, as public input in the coming weeks will be used to further refine the vision for the canopy. It remains to be seen how much of the structure the architecture firm will design or if an outside artist will be brought in to create it.

"Perkins Eastman said to us the structure of this sculptural element might be over pronounced at this point," Springfield said. "It could be thinner to give it a more lightweight appearance. It becomes almost like a scrim or a transparent element."

The city's public works department is handling the design of the new elevator, which has been delayed due to the community's desire to see it include a fourth stop flush with Market Street. Initially it was to have three stops, two inside the Muni station and one accessible from Castro Street.

Rachel Gordon, a spokeswoman for the agency, told the B.A.R. this week that the price tag for the elevator is unknown since it is still being designed. Nor is it clear who will pay for the additional stop; the city could either absorb the cost or require the friends group to foot the bill.

"The fourth elevator stop does look feasible but there is no funding for it," said Gordon. "And we don't know how much it is going to cost. It is not green-lighted because it doesn't have the approvals."

The city is trying to move the projects, both the elevator and plaza redesign, simultaneously through the approval process. Multiple agencies must sign off on the plans, and at this point, a groundbreaking is not expected until late 2020 at the earliest.

The reveal of the latest vision for the plaza will be held from 2 to 5 p.m. Sunday, May 19, at 541 Castro Street. The friends group will also be honoring gay state Senator Scott Wiener (D-San Francisco) and Lawrence M. Cushman for their support of the project.

The video and drawings will also be added next week to the project's website at https://www.friendsofharveymilkplaza.org/.