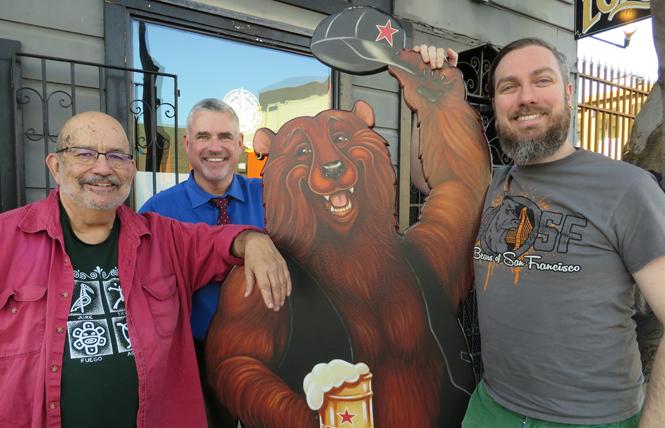 The Bears of San Francisco, a group for hirsute men and their admirers, turns 25 this year and will be celebrating Sunday, May 19.

Like most BOSF activities, the party will also serve as a fundraiser, according to BOSF steering committee member Jack Sugrue.

The Bears generally pick two or three beneficiaries per year, but "it's not a hard and fast rule," said Erik Green, co-chair of the steering committee. Green defined the Bears' mission as "fundraising, service, and socializing."

T. Justin Williams is the other BOSF steering committee co-chair. BOSF has been a certified 501(c)3 nonprofit organization since it was founded in 1994.

The asylum project provides free legal help for LGBTQ immigrants seeking asylum in the U.S. For senior and special needs dogs, Muttville either finds homes for those that are adoptable, or provides end-of-life care for dogs that are not.

The anniversary celebration will be hosted by Gold's Lil Princess, and include Jell-O shots. The day will start with a 2 p.m. reception for club laureates and former steering committee members, followed by the 3 p.m. beer bust featuring tunes by DJ Movin' Mike and performances by the Go-Go Bears, who are all members of BOSF.

"We want to party like it's 1994," Green said. "The whole idea is to get as many members together as possible. We'll have a slide show and project historic videos of the Bear Rendezvous held at Hotel Whitcomb."

Humble beginnings
BOSF steering committee members Sugrue, Green, and Larry Rivera all had different insights into how the Bears group formed and endured through the years. Rivera was a founding member and is the BOSF quartermaster.

They recently spoke with the Bay Area Reporter at the Lone Star Saloon, a favorite watering hole for bears.

Sugrue recalled the days before BOSF, "when two guys were running bear hug parties in a house on 14th Street in San Francisco." That continued for several years, followed by the privately-run Bear Expo in 1992, 1993, and 1994. The expo was quite successful, due in part to volunteer assistance. But after some expo beneficiaries questioned where all the money raised was going, and were not satisfied with the answers, Sugrue said, "the volunteers disappeared."

Rivera suggested the bears' growing popularity in the late 1980s was connected to then-current ideas about HIV disease.

"Part of the initial appeal of the bear concept," he said, "was that if you were large, you were healthy."

After its nonprofit status was established, BOSF created a weekend event called the International Bear Rendezvous, first held in February 1995. IBR started at the Ramada Hotel (later renamed the Hotel Whitcomb) on Market Street, moved later to the Holiday Inn on Van Ness, and ended up at the downtown Parc 55.

Unfortunately, IBR was so successful, Sugrue said, "Everyone wanted a piece." He explained how other people "were creating events outside the Rendezvous events." He even noticed buses hired to take people to non-IBR activities directly from the Rendezvous host hotels.

For financial reasons, Sugrue said, "We stopped the Rendezvous in 2011."

After that, the group took "some time" to consider whether to continue.

"We thought the demand was out there," Sugrue asserted. "One thing we seem to have is the goodwill of the community."

Green said BOSF currently has about 2,300 Facebook followers and between 50 and 80 dues-paying members.

"People seem to be very engaged with our Facebook page," he said, adding that the group would like to increase its membership.

"We want to develop our ability to pull people together for the greatest good," Sugrue said.

Green expanded on that thought: "We are re-imagining what membership is, and what value we are going to bring to the members."

The Bears have always tried to be as inclusive as possible.

"The first BOSF treasurer was a woman who has now transitioned," he noted.

Green said the steering committee is exploring the question of how BOSF can honor its past and look to the future.

"How do we expand our definition of 'bear'"? he asked.

There is some affinity with other subsets of the LGBTQ community.

"We definitely have some overlap with the leather community," Green said.

Socializing is also a focal point of the group.

"Lots of things we do that are successful are connected with food," Sugrue observed with a smile.

In late April, for example, the Bears partnered with Mr. and Ms. San Francisco Leather for the Dining Out for Life fundraiser of the San Francisco AIDS Foundation.

"BOSF is always one of the Lazy Bear beneficiaries," he said. "We always provide volunteers, and will again this year."

The continued success of Lazy Bear inspires optimism among the Bears, according to Sugrue.

The Lazy Bear Fund contributed a pair of Bear Tags, giving access to all Lazy Bear events, for the BOSF anniversary raffle. But Green pointed out money moves in both directions.

"Our club organized an event to raise money for Guerneville flood victims," he said, "and after the 2017 fires, we did an event called 'Bear Necessities.'"

All three men expressed how they look forward to the anniversary party. Sugrue and Green described some of their reasons.

"We raise lots of money with our beer busts," Sugrue said. "Our participants are always extraordinarily generous."

Green commented, "We are trying to keep the energy going."

Speaking for the entire steering committee, Green said, "We are really excited to celebrate our last 25 years and to launch the next 25."

The anniversary beer bust and tea dance takes place Sunday, May 19, from 3 to 6 p.m. at the SF Eagle, 398 12th Street. For more information, visit www.bosf.org. There's no cover charge. Beer busts cups cost $15 each. These cups provide for refills of beer or soda during the event, as well as a trip to the "do-it-yourself" nacho bar. For non-beer-bust buyers, food can be purchased for $7.