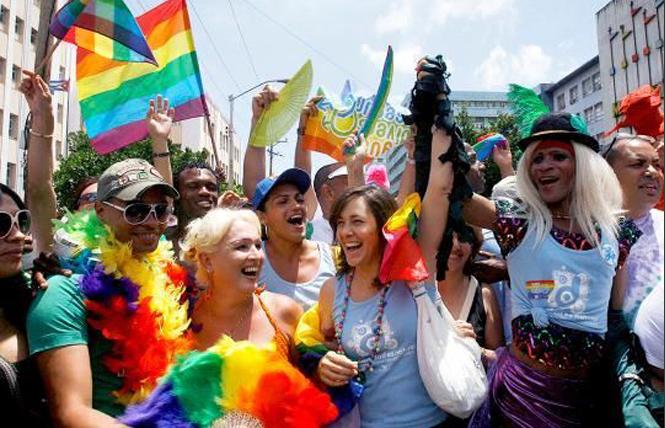 Cuba's National Center for Sex Education abruptly announced the cancellation of its two biggest Pride celebrations Monday, just as a delegation from San Francisco-based Rainbow World Fund had embarked on a visit to the country.

The Cuban Conga scheduled for May 11, and the annual International Day Against Homophobia and Transphobia in Camagüey scheduled for May 17, will not happen this year, officials of the community social networks of CENESEX, as the center is called, announced May 6 in a post on its Facebook page.

Officials cited "new tensions in the international and regional context directly and indirectly affect our country," and the "implementation of the policies of the Cuban state," as the reason for the two main events being shut down.

Gay longtime AIDS activist Cleve Jones is with RWF on the trip and will be honored by CENESEX, which is led by Mariela Castro Espin, an ally who is the daughter of former Communist Cuban President Raul Castro and the niece of the late Cuban revolutionary and president, Fidel Castro.

Jones was going to be a grand marshal at the now-canceled parade in Havana.

"We just received the news, but we are, of course, still going," Cotter said. "It's disappointing that the two congas (Pride marches) have been canceled. They are a powerful means to organize and show the strength and vitality of the LGBTQI community. We hope that they will return next year."

The May 10 event at Havana's Karl Marx Theater honoring Jones will go forward, and Cotter said that many other activities will also be held as planned, including arts exhibits and performances.

CENESEX's decision to cancel the marches complied with the "policy of the Party, the State and the Revolution" under the auspices of Cuba's Ministry of Public Health, officials stated.

In recent weeks, President Donald Trump threatened to impose a full embargo on the Caribbean island nation, along with additional sanctions, in response to Cuba's ongoing support of Venezuelan President Nicolás Maduro.

The announcement came a week after Title III of the 1996 Helms-Burton Act went into effect, the Washington Blade reported.

The Pride cancellation announcement confused and angered detractors and supporters of the event throughout Cuba's LGBT community.

"Shame on those who made that decision!" Adiel Gonzalez Maimo, a 29-year-old gay Cuban man, commented on the Facebook post. "I don't agree, I don't agree!"

Gay San Francisco HIV/AIDS activist Michael Petrelis wrote via Facebook Messenger from the Dominican Republic that less than a week ago LGBT May Day celebrants were waving rainbow flags and hugging and kissing each other.

Gonzalez Maimo and other LGBT activists who support CENESEX believe that its leaders are making the wrong decision and that it raised concerns about the center's ties to Cuba's government.

"We cannot go back," wrote Gonzalez Maimo in a message via Facebook. "I still believe in CENESEX, and support Mariela's work. I believe in her, but now they are not doing well by accepting the orders from someone else in government."

LGBT activists are planning an alternative Pride demonstration to counter the canceled Pride event on Saturday.

Petrelis is pleased to see LGBT Cuban resistance and wished he could be there. As previously reported, he was banned from Cuba earlier this year.

"I am happy to see LGBTI Cubans are planning a gathering in Parque Central this Saturday afternoon," wrote Petrelis. "The cancellations are galvanizing the queers."

Brunei backs away from gay death penalty
Brunei will not impose the death penalty for people convicted of having gay sex, the country's ruler said Sunday.

Brunei's Sultan Hassanal Bolkiah bowed to ongoing international outrage against the country's implementation of harsh Sharia law for individuals convicted of homosexuality, adultery, and rape and, in a televised announcement, said there would be a moratorium on capital punishment.

Bolkiah also said he would ratify the United Nations Convention Against Torture.

The announcement comes after more than a month of global backlash and calls for boycotts from celebrities, major banks, and global political leaders denouncing the implementation of Islamic law.

However, it's unclear how long the moratorium will last.

Bolkiah buffered his comments stating that there were some "misconceptions" about the law.

"However, we believe that once these have been cleared, the merit of the law will be evident," he said, according to CNN.

10 trans caravan members win asylum
Ten transgender women who were members of a caravan targeted by President Donald Trump during the 2018 midterm elections celebrated a victory last month, as they won asylum in the United States.

"I feel so happy because I know that I'm heading to my new life," Cataleya, one of the 10 asylum winners, who was only identified by her first name, said in a video posted on Twitter. "My future starts now."

The 10 asylum seekers were a part of a group of 30 transgender migrants out of the nearly 80 LGBT migrants from Central America. Last fall, they splintered off from the larger caravan of thousands of people fleeing violence, political turmoil, and poverty.

"The reality is that it's extremely difficult to make that journey without a strong community behind you," Morris said. "People can often get targeted by the very people that they're traveling with."

Transgender members of the larger group described being left behind when other migrants were offered rides and were the last to receive food, leading the LGBT members to band together, she explained.

They were detained at the U.S.-Mexico border when they presented themselves in Tijuana and spent the last six months in a South Texas Detention Center.