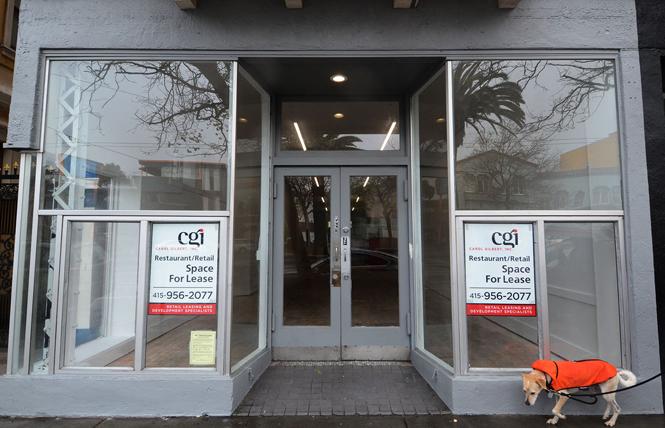 And they also object to requiring health care providers, like urgent care clinics, to seek a conditional use permit in order to open in ground floor spaces along the commercial corridor.

Their concerns were laid out in a staff report regarding a zoning change proposal that District 8 Supervisor Rafael Mandelman is pursuing for the business district in the gayborhood. His aim is addressing the glut of empty storefronts along Market Street —mainly between Church and Castro streets — that has been exacerbated by the opening of new mixed-use developments with housing over retail spaces in the area and changes to consumers' shopping habits away from brick-and-mortar retailers to online sites.

The city's planning commission is expected to take up the proposal at its meeting Thursday (May 9). It would then head to the Board of Supervisors' for approval before being sent to Mayor London Breed for a final sign-off.

As the Bay Area Reporter first reported in March, art studios, nonprofit offices, and restaurants serving wine and beer would find it easier to open along upper Market Street under the zoning changes. Mandelman, a gay man elected to the board in June, spent months conferring with neighborhood leaders on the legislation.

Wine shops and restaurants that only sell wine and beer would no longer need to seek a conditional use permit if they wanted to open in a ground floor space; those selling or serving liquor and spirits would. Businesses would be allowed to stock more items for sale on the sidewalk in front of their stores, such as gardening supplies, plants, and building materials.

The zoning changes come as several restaurants have opened along upper Market Street or ready to soon welcome patrons. As the B.A.R. reported online May 2, beer hall Willkommen from San Francisco-based Black Hammer Brewing, at 2198 Market Street, is opening this week, and nearby Brewcade won approval last Thursday to expand its arcade business at 2200 Market Street.

Mandelman's proposal would allow arts activities, nonprofits, and child care centers to open on the first and second floors of a building along upper Market Street without the need for a conditional use permit. Such a business would need to apply for the permit if it wanted to open on the third floor or higher.

Since planning staff has no problem with arts uses moving into the commercial corridor, they are going even further than the supervisor and recommending that such uses be allowed to lease a space on the third story or higher without a permit.

"Arts activity uses can be integral uses for attracting patrons to an NCD," wrote Diego Sanchez, who oversees legislative affairs for the planning department, using the acronym for neighborhood commercial district. "It is not uncommon that individuals attending an arts event look to dine or shop afterwards. Permitting arts activity uses to the greatest extent helps to capture this potential synergy."

But the planning department is taking the opposite approach to nonprofits, recommending they be prohibited on the first floor of a building but allowed without the need to seek permits on the third story and higher.

"Philanthropic administrative service uses resemble office uses in that they typically do not lend themselves to attracting customers or clients from off the street," wrote Sanchez. "The Planning Code recognizes this fact by not considering them active commercial uses, suitable to promoting an active, pedestrian orientation on important commercial streets. As such, philanthropic administrative service uses can be considered too insular and inappropriate for the 1st story of buildings on commercial corridors and land use controls should be modified in accordance."

Mandelman told the B.A.R. Tuesday that he still believes nonprofit uses would be one solution for filling the vacant commercial spaces along upper Market Street and that he wanted to hear more from the city planners on what their concerns are with allowing such uses.

"I share their concerns about market-rate offices; I think that has the potential to raise rents. I have been less concerned about nonprofit offices," said Mandelman. "This is consistent with what we were hearing with the community groups we were working with. I don't want to do something rash or unwanted. We want to hear more about what they are thinking."

Asked if he could tailor the nonprofit uses to those that align with the goals of the Castro LGBT Cultural District, Mandelman responded he was unsure if that would be legally possible. The special district won support from the city's historic preservation commission last week and will now be taken up by the supervisors for final approval.

"We could consider it, but I would want to get legal advice on something like that," said Mandelman. "It sounds complicated."

Under current rules, such businesses do not require a conditional use permit in order to open. But they would under the zoning change Mandelman has proposed. Rather than ban them outright, Mandelman prefers requiring them to seek support from the neighborhood in order to open.

But the planning staff does not support such a requirement, noting that the city's Health Care Services Master Plan calls for "unhindered access to health care services," especially for seniors and people with disabilities. Sanchez contended such businesses add to the vibrancy of commercial districts.

"Often when one visits the dentist or chiropractor, one also attends to other errands in the same commercial corridor, helping multiple businesses with one trip," he wrote in his report.

Mandelman, however, told the B.A.R. he continues to support requiring such businesses to seek permit approval in order to open along upper Market Street. Overall, he believes city planners are in agreement with the need to make zoning changes to the corridor.

Planning director responds to permit issue
As the B.A.R. previously noted, Mandelman hopes the zoning changes will reduce the amount of time it takes for a new business to open along upper Market Street. According to a report released this winter by the city's budget and legislative analyst, it takes a year for most businesses in the commercial corridor to secure their permits from the planning department.

Yet planning director John Rahaim, a gay man who has held the job for 11 years, during a recent editorial board meeting with the B.A.R. pushed back against recent media reports blaming his department for the length of time it takes businesses in the Castro to obtain their permits and open their doors.

"The vast majority of those vacancies in the Castro aren't even asking for permits," said Rahaim, thus any implication "that our processes are what's holding up people moving into their spaces" isn't true.

Nonetheless, "with respect to the retail spaces," added Rahaim, "I think that it does take too long to get approvals for many retail spaces, and it's partially because we require a lot of businesses to go through a planning commission hearing that in most places would be approved as a right."

While the city can do more to speed up the permit approval process for small businesses, and is working to do that, Rahaim pointed to other factors causing the vacancies not just in the Castro but across the city.

"What is the real issue right now with retail is online shopping and how that's what's having a dramatic effect on where people shop and how people shop and the type of businesses that can go on street level," he said.

The planning department is looking at if the city should no longer require ground floor retail in certain buildings, said Rahaim, such as those located on side streets near commercial corridors. But he doesn't envision dropping that requirement along upper Market Street.

"It's hard for me to imagine we wouldn't require retail on Market Street or Castro Street. But there's a lot of other streets where, I think, we don't actually require it, but we try to get developers to do what we call active ground floor," he said. "And so what constitutes an active ground floor and how do you make it active and pedestrian friendly ... we're in a new era, with respect to retail, and we have to start looking at this stuff differently."