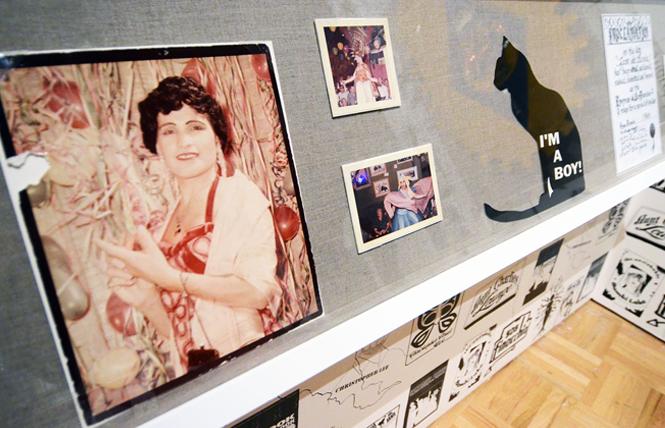 An effort to have gay icon and drag queen Jose Julio Sarria inducted into the California Hall of Fame is being revived this year now that Governor Gavin Newsom is leading the Golden State.

In January 2015, LGBT community leaders launched an effort to see Sarria be named to the hall that year due to it being the 50th anniversary of the Imperial Court System, which he established in San Francisco and has become a major LGBT philanthropic group throughout North America. The campaign on behalf of Sarria, who was also a veteran and a prominent Latino leader, had broad support from across the state, with not only LGBT elected officials and community leaders backing it, but also veterans groups and the Latino community.

Yet then-governor Jerry Brown turned a deaf ear to the calls to include Sarria among the Californians inducted into the state hall. Speculation turned to members of his administration being wary of adding a drag queen to the list as behind the snub.

Now that Newsom, a former mayor of San Francisco who has a long record of supporting LGBT rights and causes, is the state's governor, LGBT community leaders have renewed hope of seeing Sarria finally join the ranks of other Golden State residents in the hall of fame. Past LGBT inductees include the late gay Supervisor Harvey Milk, gay artist David Hockney, lesbian tennis star Billie Jean King, and the late lesbian astronaut Sally Ride.

"Jose Sarria is one of the people who made it possible for people like me to get elected to office. He ran for office during a time period when LGBT people simply didn't do that," noted Wiener in a phone interview with the Bay Area Reporter. "He broke a barrier. Even though he didn't win, he did well. He got a lot of votes."

His candidacy "sent a powerful message" to the city's political establishment, added Wiener, "that there was a strong LGBT constituency that politicians needed to pay attention to and work with that constituency. What Jose Sarria did was extraordinary and helped shift the future course of our movement."

Gay San Francisco Supervisor Rafael Mandelman plans to introduce a resolution next week that would have the full Board of Supervisors in support of naming Sarria to the hall.

"Jose Sarria was an important person in queer and San Francisco history," Mandelman told the B.A.R. "He was dreaming dreams for queer people long before most queer folks knew those dreams could be dreamed. And certainly before Harvey Milk."

In April the board overseeing City College of San Francisco renewed its support of seeing Sarria be included in the hall. In a letter sent to Newsom by the board's current gay president and vice president, Alex Randolph and Tom Temprano, they urged the governor to heed the community's call for honoring the gay icon.

"His story and relentless work on behalf of his nation and community inspired thousands of members of the LGBTQ community to fight for equality and run for office, the two of us on the City College Board of Trustees included," wrote Temprano and Randolph, who worked for Newsom's mayoral administration. "Almost 60 years later, over 680 openly LGBTQ leaders are serving in elected office."

They also noted how Sarria, in 1965, after proclaiming himself Empress of San Francisco, founded the Imperial Court of San Francisco. The drag charity grew into an international system that continues to crown empresses and emperors in San Francisco and cities across North America. City leaders in 2006 renamed a block of 16th Street fronting the Harvey Milk/Eureka Valley Branch Library in the gay Castro district in honor of Sarria.

"Jose was a distinguished WWII veteran, a LGBTQ trailblazer, a human rights activist, a lifelong volunteer and mentor, and most importantly a proud Californian," wrote the community college leaders. "His legacy embodies the spirit of California and the California Dream."

Museum of Transgender Hirstory and Art founder Chris E. Vargas included Sarria in his special installation as part of the Oakland Museum of California's new exhibit titled "Queer California: Untold Stories." At the opening last month, Vargas told the B.A.R. that he supported seeing Sarria be inducted into the hall.

"There are a lot of things in his biography that merit that recognition," said Vargas.

Current members of the Imperial Court system launched the initial effort to induct Sarria and maintained pressure on Brown's office throughout his most recent second term. They are hopeful that Newsom will come through and commit to doing so.

"I do not know it is true, but I understood from some good sources the drag part of Jose stopped Brown. And these were pretty good sources," said San Diego resident Nicole Murray Ramirez, who was elected an empress of the Imperial Court in 1973 and currently holds the title of Queen Mother I of the Americas, Canada, United States, and Mexico. "They ignored he was a veteran and civil rights leader first. All due respect he definitely deserves to be inducted. Not that the others don't, but he deserves it more."

As for Newsom, Ramirez told the B.A.R., "I believe that this is the governor that will do it."

According to Wiener, Newsom and the caucus members "had a good conversation" about why they felt Sarria merited induction into the hall of fame. Newsom did not disclose, however, to the lawmakers whom he intended to induct this year.

A spokesman for Newsom did not respond to a request for comment for this article.

His senior adviser on strategy and communications, Daniel Zingale, last fall wrote in a column for the nonprofit news website CALmatters that Newsom should open up the process for inducting people into the state's hall of fame to the public. Zingale, a gay man, also suggested that former San Francisco 49ers player Colin Kaepernick be one of the honorees having put a national focus on the issue of police brutality and killings of African Americans by taking a knee during the singing of the national anthem at football games during the 2016 season.

"Let the people weigh in online for your inductees to the California Hall of Fame," wrote Zingale. "Even small ways of giving the public a say in insider decision-making could begin to add up."

Zingale had previously worked for former first lady Maria Shriver, who is now separated from former governor Arnold Schwarzenegger. She helped launch the California Hall of Fame and had hired to run it John O'Connor, a gay man who would go on to serve as executive director of Equality California, the statewide LGBT rights organization.

At EQCA's forum earlier this year for local elected LGBT leaders from around the state, Atkins asked the attendees to sign on to the campaign to induct Sarria and send letters of their own to Newsom's office. The public is also invited to send in letters on behalf of Sarria; they should be addressed to Governor Gavin Newsom, California State Capitol, Suite 1173, Sacramento, CA 95814.

Ramirez asked that people also email a copy of their letter directly to him at nicolemrsd1@gmail.com.

To learn more about the California Hall of Fame and its inductees, visit its website at http://www.californiamuseum.org/inductees.