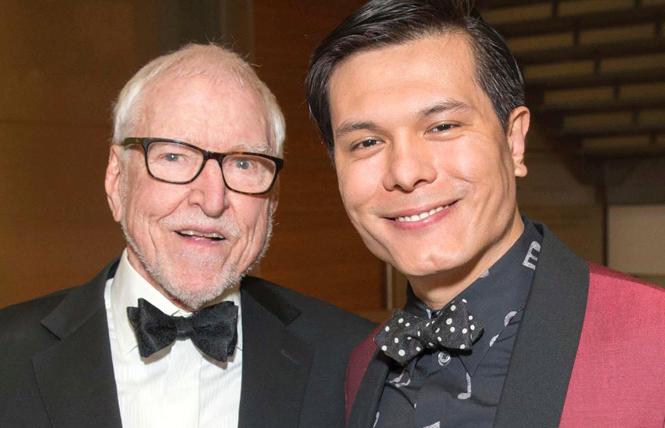 The couple is being recognized for their support of the CMC's New Voices Bay Area TIGQ Chorus for people who self-identify as transgender, intersex, and genderqueer.

Hormel, 86, is the first LGBT-identified person to serve as a United States ambassador — he served in Luxembourg from 1999-2001 under President Bill Clinton. Hormel is also a co-founder of the Human Rights Campaign, the nation's largest LGBT rights organizations. He funded the James C. Hormel LGBTQIA Center at the San Francisco Public Library and was given the lifetime achievement grand marshal award in 2010 by the San Francisco LGBT Pride Celebration Committee.

"We believe that safe spaces for transgender people to come together, to create music, and to explore artistic expression are vitally important," Hormel and Nguyen said in a joint statement. "We're pleased that Community Music Center has provided that opportunity through the New Voices TIGQ Chorus, and we're proud to support musical study that takes into account the whole person. That's something that everyone deserves."

The Community Music Center was founded in 1921 by Field, for whom the Community Impact Award is named. The center's mission is to make music accessible to everyone, according to Executive Director Julie Rulyak Steinberg. The center offers lessons, classes, cultural experiences, and performances.

"Today, CMC is serving the most students its ever served, serving over 2,800 students around the city with free and low-cost music programming," Steinberg told the Bay Area Reporter. "CMC was founded with the vision that music and music education should be accessible to all people."

Different types of music from all over the world are part of CMC's curriculum and performance schedule, including classical, jazz, rock, Latin, traditional Chinese music, Middle Eastern music, and pop, among genres. The annual budget for CMC is currently $5.6 million. Tuition is part of the funding structure, but money is also raised through foundations, individuals, corporations, and special events.

"CMC is always working to build more resources to not only ensure the sustainability of our organization but also our ability to grow and respond to what we understand is needed in the communities that we serve," Steinberg said.

Steinberg also spoke of the TIGQ New Voices Bay Area Chorus, explaining that the idea for it was sparked by a community member who approached Steinberg several years ago and said that there was a need that needed to be filled.

"Soprano, alto, tenor, base is generally very gendered and is often uncomfortable for TIGQ people," Steinberg said. "And so this idea was born. In talking about it with the program staff at the time, CMC wanted to embrace it. We gathered together a group of stakeholders in the TIGQ community who understood how to reach these folks and how to engage in conversations, and also what CMC should do to prepare to really welcome in a formal way a group we had not served with a distinct program before."

The program is tuition-free. Funding for it was raised through a variety of sources, including with the help of Hormel. The chorus was launched last September, and is now over 40 members strong. It meets weekly, on Sunday evenings. Steinberg noted that the group sings a diverse repertoire and is welcoming to singers of all backgrounds, and all levels of experience.

"It is such a powerful experience to be part of the rehearsals, to be a part of the group, and to see how they've come together, how they've explored the idea of singing without a specific gender expression," she said.

Steinberg added that the organization has learned a lot from the formation of the TIGQ chorus, such as a greater understanding of how to treat the voice of someone who doesn't identify as a traditional male or female or may be transitioning.

The chorus is already beginning to make its mark, with performances taking place for the Transgender Day Of Remembrance at UC Hastings Law School and for World AIDS Day at Grace Cathedral.

When Hormel and Nguyen are honored at the May 11 gala for their support of the chorus, the evening will include a performance from pianist Robin Sutherland, who held the principal keyboards position at San Francisco Symphony for 45 years. There will be performances by faculty and students, and a banquet dinner. Funds raised at the gala support financial aid and student scholarships totaling over $2 million annually.

Steinberg noted that the support from someone of Hormel's stature lends incredible credibility to CMC.

"It helps us to communicate the seriousness that we have in growing this program," she said. "It speaks overall to CMC's work in providing access to marginalized communities, to communities of color, to communities that are in need. It really is an incredible honor to be supported by them in this way."