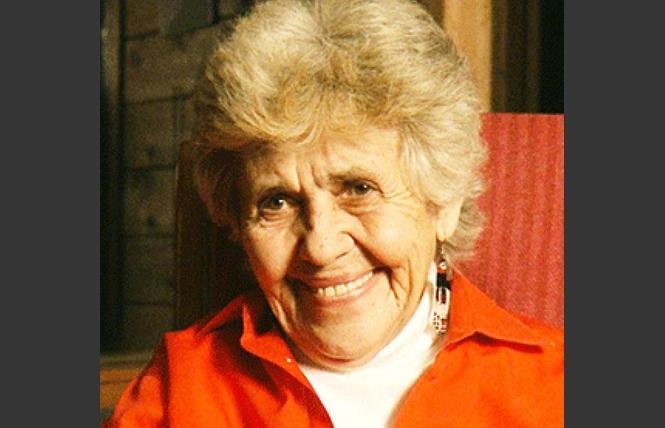 Gearhart, 88, was the first out lesbian to receive a tenure-track position at San Francisco State University in 1973. She established one of the first women's and gender studies programs in the country while at SF State, and was a leading LGBT activist throughout the 1970s and 1980s.

Gearhart was featured in the Oscar-winning documentary "The Times of Harvey Milk" (1984), having been a friend and colleague of Milk, the late San Francisco supervisor. Gearhart worked with Milk on the 1978 defeat of Proposition 6, a California ballot initiative that sought to exclude gay men and lesbians from teaching in public schools. Gearhart is also an acclaimed author of feminist science fiction.

Corky Wick, a lesbian and former student of Gearhart's, told the Bay Area Reporter that she was a big influence on her.

"I probably came out because of her," Wick said in a phone interview last week. "Sally has done so much for all of us."

Lani Ka'ahumanu, a bi woman and feminist writer and activist, told the B.A.R. that she visits with Gearhart regularly.

"Every moment I'm with her is a treasure," she said, adding that Gearhart talks about Milk.

Wick added that while Gearhart does receive her pension, the costs of her care are such that additional funds are necessary.

Ka'ahumanu added, "Anything would be great."

HealthRIGHT 360 unveils new program
HealthRIGHT 360 will have the grand opening of its new children's dental clinic pilot program Saturday, May 4, from 9:30 to 11:30 a.m. at the agency's integrated care center located at 1563 Mission Street in San Francisco.

The pilot program will serve low-income children up to age 18, and helps bridge the gap for low-income families, many of whom have no dental insurance.

Officials noted that tooth decay, though largely preventable, is the most chronic childhood disease. In San Francisco, the rate of tooth decay in kindergarten-aged children ranges from 40 to 60%, and is higher in neighborhoods with African American, Latino, and Asian American populations, according to a news release.

Clinic hours will be Saturdays from 9 a.m. to 5 p.m. and it will provide dental exams, cleanings, and fluoride varnish, as well as specialty treatments including night guards, primary tooth root canals, same-day toothache appointments, and more.

Dem prez candidates head to Manny's in SF
Four Democratic candidates seeking the party's 2020 presidential nomination will be stopping in San Francisco at Manny's, 3092 16th Street, in the next few weeks.

Former Housing and Urban Development Secretary Julian Castro will be speaking Wednesday, May 15, from 5:30 to 7:30 p.m.