Jock Talk: Rippon revels in candor, some snark in SF 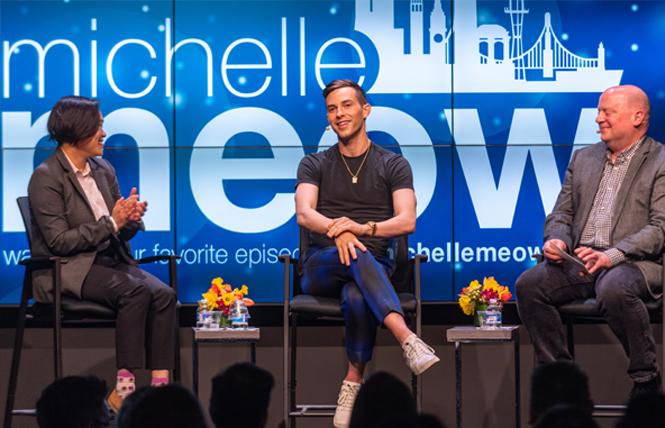 If you're a get-off-my-lawn curmudgeon like Judge Judy or me, your first impression when hearing Olympic figure skater Adam Rippon chatter, throw shade, and coyly chuckle just might be that he's a lightweight with not much to offer — but man, what a mistake that would be.

Once you stop counting the number of times he overuses and misuses the word "like" in a sentence, you can concentrate on the deeper meaning of those sentences. It is then you assess how driven and disciplined he is when he sets his sights on a goal.

Whether he is talking about his roller-coaster quest to reach the Olympics, his heavily publicized exchanges with Vice President Mike Pence during the Olympics, or his activities since announcing his retirement from competitive skating last November, the dude is seriously funny.

Rippon, 29, spoke for an hour Sunday, March 28, at the Commonwealth Club as part of "The Michelle Meow Show" about his activism, accomplishments, and ambitions. (The San Francisco Gay Men's Chorus at its gala had honored him Saturday night.) He talked about his coming out, his doubts during training, his excitement about the future. He did it all with a casual candor and sarcastic wit that left the audience wanting more.

He mentioned to the crowd he was from Scranton, Pennsylvania. A couple of audience members whooped, indicating they were from Scranton as well.

"Well, you're here now," Rippon said. "You must have liked it as much as I did."

At one point, he said, he was just mucking along, never quite doing enough to get over the top. His mother, he said, told him during a visit, "You better get your shit together or this is going to be a sad ending."

Which, he said, was exactly what he had been thinking. He said retiring without succeeding at making the Olympics he was told he should make would have been a terrible fate.

"I didn't want to be not successful, a little bit fat, and gay," he said.

That would be a disappointing Tinder profile.

Rippon finished just out of the running his first two tries for the U.S. Olympic men's figure skating team, being named an alternate in 2010, but performing below par at the nationals four years later — a time at which the skating gods say he should have been at his peak. He won the nationals in 2016 but missed out on the nationals the next season with a broken foot.

Rippon came out quietly in a skating magazine not long before those 2016 nationals.

"When I came out, I'd never been to the Olympics," he said. "Nobody made a big deal of my coming out until I made the Olympics."

But once he did make the 2018 Olympics, a big deal of it was made. He was the first openly gay American winter Olympian, then doubled down on that achievement in South Korea, where he helped the U.S. win the figure skating team bronze medal.

Rippon said he had, by then, started to be more open and honest in interview responses rather than just providing the sort of tepid don't-rock-the-boat responses younger athletes often give. ("It felt good," the rookie said when asked how it felt to score the winning goal. "It felt real good.") He spoke candidly about falling in routines or hoping competition stress would help him lose weight.

So, when a reporter asked him what he thought about Pence as President Donald Trump's selection to lead the national delegation, Rippon said he thought it was a poor choice. He cited Pence's record on LGBT rights and conversion therapy and said he did not think he was a good representative of all Americans.

Pence tried to meet with Rippon and sent messages through social media. Rippon said he thought for a moment about meeting with Pence, but then rejected the idea as being just political theater.

"He was going to lecture me," Rippon said. "I don't need to be lectured."

"It's all so we can perform live for television audiences," he said.

He said he thought athletes competing on snow have it worse. Usually major ski meets have long open blocks of time so competition can be held when conditions are safe and optimal. Not so at the Olympics.

So there he was this week, talking about a book he had in the works and a YouTube channel he had just launched.

If you listened to him for just five minutes, you probably would have written him off as an entertaining flash-in-the-pan lightweight. But if you stayed for the whole hour — and really, nobody was walking away from that laugh fest — you realized you just might be hearing a generational shift in LGBT sports leadership and advocacy.