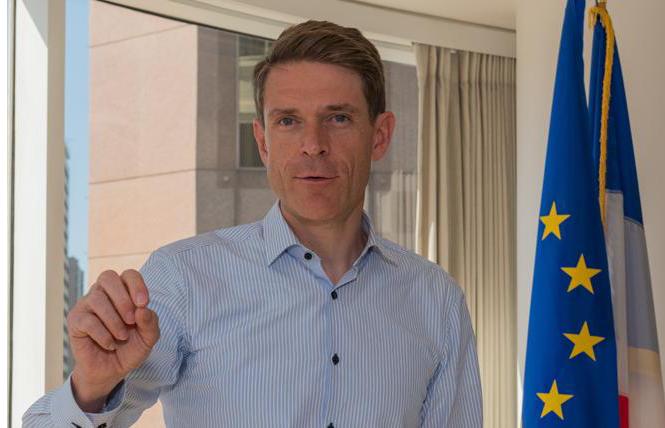 The concert is free and open to the public.

The concert will include performances by the San Francisco Symphony; San Francisco Opera; American Bach Soloists; Johann Vexo, the organist from Norte Dame; and others.

"Watching Notre Dame de Paris engulfed in flames was a shock for all Paris lovers," said Emmanuel Lebrun-Damiens, a gay man who is consul general of the French Consulate of the Northwest and based in San Francisco. "Beyond a monument and an architectural masterpiece, it is a part of the world history of art and our common identity that was being damaged."

"Watching Notre Dame burn was devastating, just as it was also horrible to witness a series of historic Louisiana churches burnt in recent arson attacks," Breed said in a statement. "Our houses of worship hold a special place for our cities and our people, and we are proud to support the people of Paris as they begin the work to rebuild the iconic monument in the heart of their city."

According to media reports, a cause of the massive blaze has not been determined. French President Emmanuel Macron has vowed to have the cathedral rebuilt in five years. Already, French business and fashion leaders have donated millions of dollars for the effort.

Hosts include gay AIDS activist Cleve Jones, who is going on the trip and will be honored in Cuba, and Dr. John Newmeyer, a gay man and former epidemiologist.

The benefit will feature a Cuban band, three-hour hosted bar with Cuban cocktails, and hors d'oeuvres. There will also be a silent auction featuring wine, spirits, restaurant certificates, massages, and more.

RWF is funding $25,000 in scholarships that will enable hundreds of LGBTQ activists from the country's 16 provinces to travel to Havana to attend Pride, network, organize, and attend a week of training.

To purchase tickets, or for more information, visit https://rainbowfund.networkforgood.com/events/12442-party-help-fund-lgbtq-pride-in-cuba.

The beer bust will feature food, performances, and door prizes. The event supports the world's first public plaza dedicated to the living commemoration of leather heritage.

Earlier this year, the San Francisco Board of Supervisors unanimously approved a street encroachment permit so the plaza project can get started.

The online giving day was held April 18 and raised funds for nonprofits in all 50 states, the District of Columbia, and, for the first time, Puerto Rico.

Give OUT Day also broke its previous record for number of donations made through the campaign: nearly 14,000.

"The record-breaking success of Give OUT Day demonstrates the incredible power of our communities when we come together," Horizons President Roger Doughty said in a statement.

In addition to the funds raised by individuals, Horizons, with support from other foundation partners, awarded leaderboard prizes worth nearly $100,000 to nonprofits that raised funds from the greatest number of individual donors in multiple categories.

AHF pharmacy open house
Los Angeles-based AIDS Healthcare Foundation is embroiled in a fight with gay state Senator Scott Wiener (D-San Francisco) over his housing legislation, Senate Bill 50 [see related story], but its pharmacy in the Castro will have an open house Friday, May 3, for tips on living a healthy lifestyle.

The event, from 10 a.m. to 4 p.m. at 518-A Castro Street, will include a free lunch, raffles, and health tips. AHF will provide information on blood pressure, diabetes screening, HIV testing, and holistic nutrition.