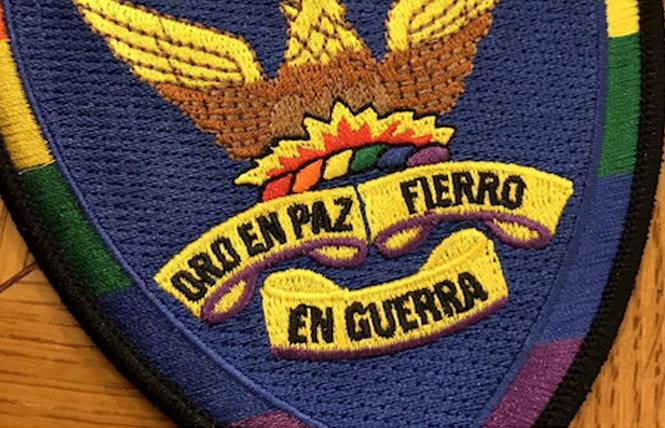 The San Francisco Police Department says its officers will be the first in the nation to wear special patches during Pride Month in June.

Initially announced via Twitter April 4, the Pride patches are lined in the colors of the rainbow flag with the city's crest in the center. They will be optional for officers to purchase internally for $20 with proceeds being donated to Larkin Street Youth Services, a nonprofit that provides youth, including LGBTQs, with education, housing, and employment training.

"We hope this will really build bridges for us, as well show that within the organization there are many of us," Commander Teresa Ewins, a lesbian who sits on the board of the SFPD Pride Alliance, a group for LGBT officers, told the Bay Area Reporter last week.

Ewins said the department is proud to support Larkin Street, particularly because many queer youth receive essential services from the agency. She wants the patches to show youth that, they too, can be police officers.

"[They] can be anything they want to be in the police department. Hopefully, we show them that we are an example," Ewins said.

The department will also once again have a contingent in the San Francisco Pride parade Sunday, June 30. This year's Pride theme is "Generations of Resistance." It celebrates the 50th anniversary of the Stonewall riots, an LGBT rebellion against police forces in 1969 in New York City that gave rise to the modern gay rights movement and was the event that spurred the nation's first Pride parades.

But it seems that not everyone is thrilled to have a police contingent in the parade. The department has marched in it for many years.

In late March, graffiti on the sidewalk near Bank of America at 18th and Castro streets read "Police Out of Pride."

As well, some LGBT leaders say although the rumblings of anti-police messaging from the community might be quiet this year, that doesn't mean they aren't there.

"I don't think it's been well publicized that it's happening, but I've heard it around," said Janetta Johnson, a trans woman of color who is the executive director of Transgender Gender Variant and Intersex Justice Project, a nonprofit that works with trans and gender-nonconforming people inside and outside of prisons, jails, and detention centers.

The SFPD said it hasn't heard of any backlash to the parade contingent and that, historically, it rarely has. Though conversations have been had throughout the years among the department's Pride Alliance board members regarding the community's aversion to police marching in the parade, the support has outweighed those voices, said Ewins.

"I've heard no opposition this year," Ewins said. "Even those years that there were conversations about us not marching, the welcome we received in the march was pretty immense. People are happy to have us there."

Johnson said that for communities of color and the trans community this isn't always true.

"I don't go to Pride because I always see someone get beat up by the police," Johnson said.

In 2016, Johnson was a community grand marshal for the parade, but withdrew after it was announced that policing would be increased in the wake of the Pulse nightclub massacre in Orlando, Florida that left 49 people dead and occurred shortly before the San Francisco parade. Other Pride honorees also backed out that year, citing similar reasons.

For Ewins, it's essential that SFPD march in the parade because it allows the community to see first hand that the department has LGBT members.

"It's important because we strive to be a diverse department," Ewins said. "A part of our diversity is the amount of LGBTs we have. We have officers at every rank. I came out in the parade. It's one of those things that we can truly be proud of and show our community who we are."

Ewins also said there is value in showing the city's youth the unity among SFPD and the communities it vows to protect.

"How can we not show kids, young people in San Francisco as well as across the country, and to certain government entities, that we are unified in community and represent the larger community of LGBT? This is who we are," Ewins said.

"The SFPOA remains staunchly opposed to discrimination and the politics of division," he wrote in an email response to the B.A.R. "We plan on proudly participating in this year's Pride parade. We call upon any individual or organization looking to exclude others from this event to practice what this event preaches; inclusiveness, acceptance, and a focus on showcasing the best of what San Francisco has to offer to the world."

Montoya added that the alliance's decision to help Larkin Street is also important.

"Our support for Larkin Street Youth Services underscores our commitment to finding solutions to our ever-increasing homelessness epidemic and dire need for wraparound services for our youth," he wrote. "This community-based organization is a beacon of hope and the SFPOA is committed to assisting its programs reach more youth and families."

When asked if she felt there was value in the police marching or to show the LGBT diversity of the department, Johnson said, "That might be true for some people, but for our population and for the people I know, those people don't necessarily represent us." 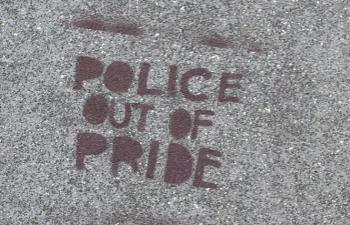 Graffiti urging police not to participate in the San Francisco Pride parade was spotted in the Castro in late March. Photo: Matthew S. Bajko

Past tensions
Joey Cain, a queer man and former president of the board that oversees San Francisco Pride, said he has not heard of any resistance to the police contingent this year, but that it has been a narrative at many Pride events throughout the years. He also added that relations between SFPD and the LGBT community are vastly better. Cain served on the Pride board form 1998-2004.

"Always, people have concerns about police marching in the parade, and I totally understand that. Yes, relations have improved a lot, but I believe they can always be improved more with our community and any community with the police department," Cain said.

Police used to raid gay bars in the city. In August 1966, trans people tangled with police in what became known as the Compton's Cafeteria riots, which took place three years before Stonewall.

Decades ago, tensions were high between the SFPD and LGBT community after Dan White, a disgruntled ex-supervisor and former city firefighter and police officer, assassinated gay supervisor Harvey Milk and then-mayor George Moscone in 1978. The light sentence White received for a voluntary manslaughter conviction led to riots.
In response, police raided the old Elephant Walk bar in the Castro.

"There have been major advancements in terms of the police department in certain parts of the LGBT community," Cain said. "When I first got here police were hostile in arresting trans and gay people. It was really a class issue. Queer people were being arrested, whether out on the streets to live or to party."

Today, the situation is much improved. The SFPD has done a lot of work to restore that relationship, Ewins said. It's important that the department keep an open dialogue, Ewins added, and that it welcomes those who have had bad experiences with police to come forward and share those with the department.

"Any bad experience will break down trust, and we can't have that. We need to keep that trust and build on that instead of tear it down," Ewins said. "Any conversation is good."

The U.S. Department of Justice in 2016 recommended hundreds of reforms to the SFPD after controversial police killings and escalating tensions between law enforcement and the city's communities. Among the recommendations was LGBT cultural sensitivity training. The trainings have induced "honest conversations about implicit bias and to try and understand where [LGBTs] are as individuals and the members of the police department," Ewins said.

Other marches
The SFPD has never had a contingent in the annual San Francisco Dyke March, which has been going on since 1993. Ewins said that some officers do participate as civilians, however.

Haley Patoski, a lesbian who's chair of this year's Dyke March, said organizers don't ask SFPD to participate because the community doesn't want them to. She said the board reaches out to community members to provide traffic control and security. In the past, they have gotten medical professionals from Lyon-Martin Health Services, which offers primary medical care to women and transgender people, to help out at the march.

"We try to be aware that a lot of people in the community don't feel safe around the police. That is something that is not just unique to the queer community, it does hit them particularly hard," Patoski told the B.A.R.

"We try and limit their involvement as much as possible although we understand that they are always going to be there, it's their job to monitor things," she added.

Patoski also clarified that she felt this was the consensus among a "majority" of people who participate in, and attend, the Dyke March, not just a small portion. She said officers are welcome to participate as civilians.

"We don't really want active displays of law enforcement and we have made that clear to [SFPD]," Patoski said.

In response to those who feel SFPD shouldn't march in SF Pride or other LGBT parades and events, Ewins said, "I would ask the question: are you biased against law enforcement because of the uniform I wear or because I am not accepted as a lesbian in this community?"