Jock Talk: Australia was the experience of a lifetime 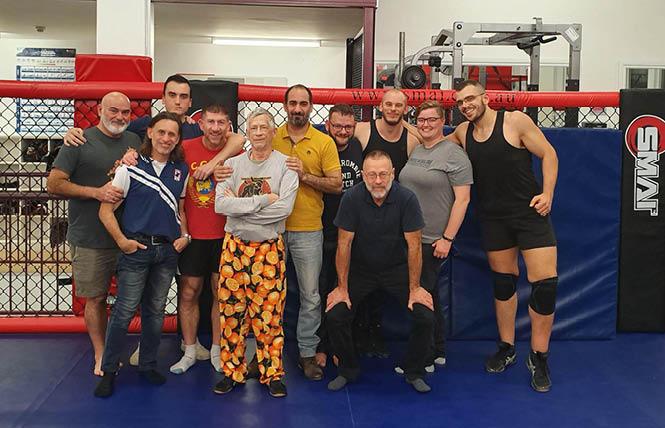 Every sports person should get a chance at least once in life to coach Australians.

Twenty years ago, I was a fragile remnant of a former athlete. My physicians' six-month deathwatch had stretched to two and a half years. In the worst of it, I summarized my experience by writing, "I have lain in bed staring at the face of Death, and worse, held the hands of his rotting minions."

This year, as spring took hold in the Bay Area after the wettest of winters, I found myself resurrected thousands of miles away in a place I thought I'd never see, enjoying the first days of autumn making new friends, cooking a feast for 20 fellow athletes, and coaching them in the sport that saved my life.

For a few years, Tony Galluzzo, then-president of Harbour City Wrestling Club in Sydney, had tried to get me to Australia to conduct a wrestling clinic. I'd met Galluzzo at the 2010 Gay Games in Cologne, Germany, when he was one of three Aussies there to wrestle. Over the years our friendship and respect grew. He let me coach his club at the 2014 Gay Games in Cleveland, Ohio, and the effort to bring me to Sydney began.

That was a logistical nightmare. Because I was on dialysis, the expense and hassle involved with transport of the massive amount of supplies and machinery my existence required was prohibitive. My energy level and ability to concentrate for sustained periods flickered as my end-stage renal disease progressed along its weary route. The dream trip to Australia was put on indefinite hold.

Then, last year, I got a kidney transplant. Five weeks later I was at the Gay Games in Paris, coaching the Harbour City Silverbacks once again, as well as its new sister club, the Melbourne Wranglers. Galluzzo and I immediately resumed our plans for a coaching trip to Sydney, this time adding Melbourne to our agenda. I arrived in late March and am returning to Oakland at the time this column is published.

Let me tell you: the past two-plus weeks have been an endless and unimaginably joyous blur of wrestling and eating, kangaroos and kookaburras, mountains and harbors, drinking, and talking. The clinics? They went smashingly well. I'd barely gotten here when I was coaching 20 or so men and women in Sydney, sweating my ass off much more than I envisioned was possible — then repeated the task less than 24 hours later in Melbourne with another group.

In both clinics, I knew only a few people in the room. Most of the attendees were newcomers to the sport and their clubs. Others were veterans who had not traveled with the squads to past Gay Games. Tradition says these kinds of clinics should teach razzle-dazzle moves, advanced skills that will wow and excite the folks, or a detailed and exhaustive exploration focused on just one move. Naturally, I did none of that. I broke down wrestling into its most basic components, the primal elements of position and mechanics, and focused on them. Universal principles that can be applied to any move and any defense in virtually any contact combat sport. The underpinnings that define the difference between success and failure.

Oh yeah, at the end I demonstrated a couple of razzle-dazzle takedowns I had them practice, but at that point I had them focused not on the moves, but what made the moves work. They asked questions as I roamed the mat. They thanked me and shook my hand. They drilled and drilled then drilled some more. We tinkered with holds (I teach them how to grab without using their hands). Afterward we met up at local bars and talked. The kind of you-had-to-be-there bonding experiences that will form the basis of reminiscing conversations years from now. Hard to express, impossible to forget.

From Melbourne, some of us took a trip to visit Hanging Rock and a local winery. In Sydney I took the ferry to Manly to spend the day with a wrestler at the beaches, then ferried back to see "Choir of Men" at the opera house with Galluzzo and his partner as well as Peter Verey, a former member of Team Australia who helped organize wrestling at the Sydney Olympics and the Sydney Gay Games.

Side trips included visits to zoological sanctuaries and botanical gardens and time in the Blue Mountains. All enjoyable stuff, but the real highlight for me was the afternoon farewell feast. I'd spent many hours scouring local markets with Galluzzo searching for the Latin ingredients I would need to cook requested recipes from my work-in-progress cookbook. We were not always successful, and I found myself substituting some ingredients while trying to adjust to a different measuring system in an unfamiliar kitchen with different tools than I usually have.

But when the wrestlers came, nobody complained. They gobbled up the Ropa Vieja, empanadas, braciole, ricotta cheesecake, mango-apricot muffins and polvorones — and asked for more. Nary a scrap left as we drank and talked and drank some more. Special guests were Verey and Barry Webb.

Webb, whose commitment to the early Gay Games were instrumental to their success, was responsible for the previous births and rebirths of Harbour City Wrestling decades ago and is the Aussie who introduced me to Galluzzo. He now is dealing with his own health issues and recently moved 90 minutes out of the city. Neither is currently much involved in club activities, but both have club awards named after them in remembrance of the examples they set and stay in contact with club leadership. Their attendance was not a casual thing.

As the evening wound down and the conversation murmured to an end, I looked around the room and thought about the improbability of it all. I was in a wondrous land with strangers becoming friends eating food I'd made through guesses and improvisation, relevant in a sport and a life I once had thought had passed me by. I did it doing what I coached and what I cooked: tackling life not by worrying about missing pieces but by focusing on the primal elements that made living possible. I did it by realizing I had something left to give and telling those rotting minions, "Now is not the time. I have Aussies to coach."

Everyone should be so lucky.