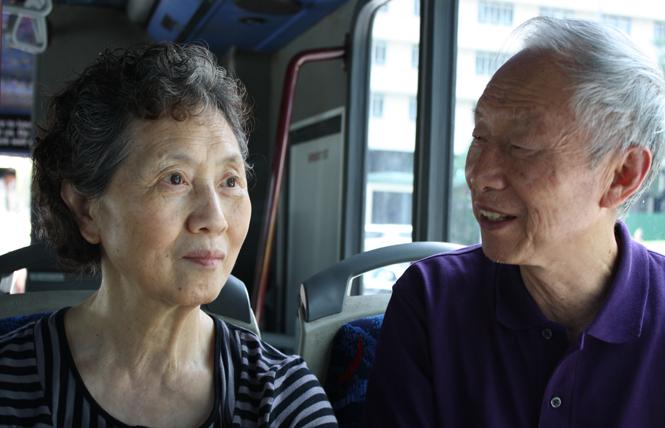 A scene from "All in My Family." Photo: Courtesy SF Film Festival

Two unique films featuring the LGBT immigrant experience will be featured at the San Francisco International Film Festival next week.

One film, "Unsettled: Seeking Refuge in America," follows three LGBT asylum seekers' and refugees' experiences as they resettle in the U.S. over a five-year period.

The other film is Hao Wu's narrative about his experience with his traditional Chinese family, who live in China, as he creates a family with his Chinese American partner in New York in "All In My Family."

"It feels really special to us that we are premiering the film in San Francisco," said Shepard, a 40-something gay man.

Many of the LGBT refugees featured in the film who resettled in the United States first came to the San Francisco Bay Area.

It took five years and nearly 25 interviews with LGBT asylum seekers and refugees, along with American hosts, and nearly $500,000 to tell the stories of the participants, who come from Syria, Angola, and the Congo.

Nahas spoke before the United Nations Security Council in 2015 about his journey as a gay man fleeing ISIS, al-Qaeda, and his family in the war-torn Syria.

Shepard and co-producer Jen Gilomen, a lesbian, felt strongly that women needed to be included in the documentary because their stories are often not told.

"They are the strongest people you'll meet," wrote Gilomen, 42, about the Angolan couple's journey to the U.S.

Adriano and Ntimansieme, who couldn't hide being lesbians, said that if their lives weren't in danger, they wouldn't have left Angola. They had careers, a house, and friends and family.

In 70 countries it is illegal to be LGBT. In four of these countries, being queer is punished by death.

The producers became incensed that American's weren't familiar with what it means to be an asylum seeker or refugee or what their experience was like.

"I hope people will come away from a screening feeling like they've had a close-up experience of what it might be like to be an LGBT refugee or asylum seeker," wrote Gilomen, and "that they'll see how important it is to expand support for these people and welcome them into our communities."

"It's not easy to get here," said Ntimansieme with Adriano sitting beside her in a WhatsApp interview. "We were lucky because we had people who put us in the right direction and that's why we actually chose to come to the United States."

"What struck me and inspires me is the bravery and resilience of LGBT refugees and asylum seekers," wrote Gilomen.

Nahas is nervous about the film's premiere, but he plans to be "as gay as I can, hopefully," on the red carpet.

He hopes the film will inspire other LGBT refugees and help them understand what's ahead of them if they choose to go through the process.

Many of the refugees in the film received assistance from the Organization for Refuge, Asylum & Migration, which aids LGBT asylum seekers and refugees.

"Since the Trump administration came to power, the number of refugees admitted to this country has been slashed by 70 percent, which is a travesty," wrote Gilomen in an email interview.

That wasn't always the case. Since World War II, the U.S. resettled more refugees and asylum seekers than any other country. During President Barack Obama's administration LGBT asylum claims began to rise, they note in the film.

"We hope that the film will be an occasion for Americans to set aside that rhetoric and really look at the humanity of who refugees are and why is it important that we support persecuted people around the world," Shepard said.

Gilomen hopes the film will be transformative for people.

"I hope this story will stay with people, and that they'll change just a little bit for having seen it — whether it is how they speak about immigrants [or] how they vote in 2020," she wrote.

Wu is known for his 2018 PBS documentary, "People's Republic of Desire." In the new film, he narrates his family's journey as he and his partner, Eric, have two children.

"This film is my personal tribute to my imperfect Chinese family, which I hope can strike a chord with audiences who have similar 'impossible' families like mine," Wu wrote in an email interview with the B.A.R.

It took an estimated seven and a half years and $50,000 of his personal financing to create his autobiographical documentary of growing up in China, his journey to America, and coming out, finding love, and having children all through the lens of his and his family's perspective, he wrote.

"I was nicely surprised by the conversations that that approach enabled me to have with my family," wrote Wu. "As a typical Chinese family, we don't often share how we truly feel with each other. Having the camera on pushed me to ask them questions I would not normally ask, and to understand them in a way that I would otherwise never be able to."