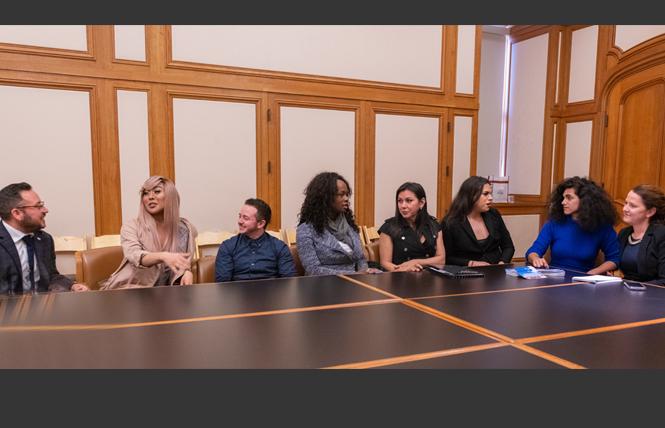 Our Trans Home — San Francisco, a new project of city and community leaders, has requested $965,200 from the city for rental subsidies, housing navigators, and to develop a housing plan for transgender people who they say face homelessness at a rate 18 times more than the general population.

In an effort to secure support for the budget ask and other recommendations made by the Office of Transgender Initiatives' Transgender Advisory Committee, community leaders met last week with members of the Board of Supervisors.

About 25 people participated in the April 4 meetings including representatives from the Trans Activists for Justice and Accountability Coalition, or TAJA for short; El/La Para TransLatinas; and trans community members, some currently facing homelessness.

After one-on-one meetings with supervisors, some of the participants gathered in the mayor's conference room in City Hall to debrief about their discussions, in which campaign recommendations were shared along with personal stories of the challenges and barriers trans people face during San Francisco's housing crisis.

"It's not easy to live the transgender experience," Melanie Ampon, who sits on the TAC, said at the debriefing. "I definitely think our experiences and storytelling is one of our greatest tools. People are not going to understand us unless we share what we go through with them."

Ampon added that some of the supervisors even got teary eyed at the meetings.

"The meeting today with the representatives was great," said Shane Zaldivar, also a member of the TAC. "It was kind of getting them to open their knowledge of what the transgender experience is as a whole and the reality is that we face obstacles every minute."

"Subsidies are helpful because people can use those to pay first and last month's rent," Clair Farley, director of the Office of Transgender Initiatives, said at the debriefing. "It gives that flexibility to meet anybody where they are at. We are saying housing first then we can talk about all these wraparound services."

Farley, a trans woman, mentioned that one of the community members who attended the meeting was late because they had to move all their belongings from one single-room-occupancy hotel unit to another that morning.

"It was just such a reminder of why we are all here, but also recognizing [that] in order to have community be able to show up there has to be a certain level of stability to be an advocate," Farley added.

Multi-year approach
The trans initiatives office is also looking at establishing a dedicated trans and gender-nonconforming housing program to address service navigation, emergency housing, and long-term housing stability, although the team does not have a budget proposal for this yet. The introduction of the campaign is the first step toward a multi-pronged approach to helping end trans homelessness. In the future, the team would also like to establish a trans-specific homeless shelter with wraparound services. For fiscal year 2020-2021, the team plans to ask for $1,177,000 to fund the same items in the previous fiscal year budget ask.

"This is going to be a multi-year approach," said Maceo Persson, a queer trans man who is civic engagement and operations manager at the trans initiatives office. "We are going bold and saying our community is in crisis. When we are facing housing instability our community is facing violence and very severe violence."

This violence oftentimes happens in homeless shelters. JM Jaffe, who is the trans health manager at Lyon-Martin Health Services and identifies as nonbinary, talked about the issues that surround the gender-segregated systems of the current shelters. Many trans women are forced to stay in men's shelters and vice versa. As well, the systems are often outdated, which can result in misgendering of trans clients.

The safety of the trans community in current shelters and programs is what struck gay District 8 Supervisor Rafael Mandelman the most when he spoke with the community members.

"They showed that a lot of transgender people feel quite unsafe in shelters and also in various types of housing options," Mandelman told the Bay Area Reporter this week. "They made a very compelling case for the need to specifically address the needs of transgender people around shelter and housing."

Mandelman added that, from his experience talking with trans folks, they also face significant obstacles when seeking mental health and substance abuse treatment.

Akira Jackson, a transgender woman of color and director of TAJA, which provides resources and support to the trans community, is heading a project focusing on this issue.

As the B.A.R. previously reported, the trans initiatives office is working with TAJA, which received a two-year $150,000 grant from the Mayor's Office of Housing and Community Development last year. A portion of the grant is dedicated to surveying local homeless shelters, Navigation Centers, and SRO hotels to better understand how they are serving the trans community and to identify gaps in services.

An aspect of this includes shelter and Navigation Center employee trainings, the first of which was conducted earlier this year by TAJA and the trans initiatives office. The trainings will occur monthly and include general cultural competency.

"We are definitely trying to make existing shelters more trans inclusive and prioritize safety in those spaces," Jackson said at the debriefing.

Persson said the trainings just touch the surface on what needs to be accomplished.

"I think it's a great start," Persson said. "I think there needs to be a lot more funding for programming put into it because I think the effort doing organizational change work for nonprofits is a lengthy effort for any organization to change."

Another official, District 6 Supervisor Matt Haney, said he fully supports Our Trans Home — SF and its budget request. A large number of trans and gender-nonconforming people live in Haney's district that includes the Tenderloin, Civic Center, and South of Market neighborhoods. He also said he would fully support a trans-specific shelter or Navigation Center in his district.

"They raised very important issues and put forward solutions that I support and told them I would advocate for," Haney told the B.A.R. "Clearly our city needs to do more robust and specific strategies to meet the housing needs of transgender and gender-nonconforming residents."

One of the first steps in the campaign will be creating a task force dedicated to implementing it. The campaign leaders are also asking people to sign a petition in support of its goals. Some of the organizations partnering with the campaign include, TAJA, El/La Para TransLatinas, Lyon Martin Health Services, St. James Infirmary, and the Transgender Gender Variant & Intersex Justice Project.

One person who participated in the meeting chose not to be identified. They are currently homeless.

"I don't have a place where I can live. I hope one day I can have one room that is for me," they said. "I hope the city can help us because unfortunately, we don't all have the money to live a better life."

For more information or to sign the petition, visit http://ourtranshomesf.org/