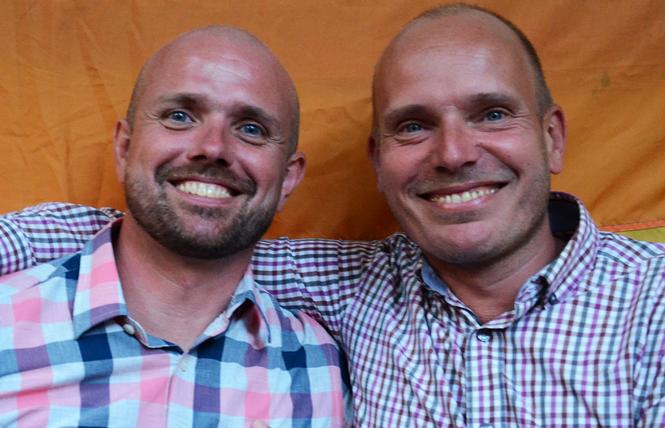 Currently, there are two marriage bills being discussed in the Czech parliament. One is the opposition's proposal, which would change the definition of marriage in the country's constitution to only between a man and a woman. The other is the government's same-sex marriage bill.

The two bills are being taken together to be voted on for the first reading. If either bill is passed, it will go onto the next two readings to be voted on by the lower and upper house of the Czech parliament before making its way to Czech President Miloš Zeman's desk.

Babiš, who founded, and is a member of, the Anti-Establishment Party, supported registered domestic partnerships, which passed in 2006.

In his TV statement he was circumspect, declaring that his position isn't his party's, freeing up members to vote according to their conscience.

"I welcome it," Adéla Horáková, 38, the advocacy director of the marriage equality campaign, wrote in an email interview.

Hana Kulhánková, a 41-year-old lesbian who is the director of Prague Pride, added that previously Babiš' support was assumed, but now "he really said it out loud."

But Horáková and Walek noted that Babiš stopped short of pushing his party to support same-sex marriage.

He is "conscious of the fact that some people have problems with calling it 'marriage,'" Horáková wrote.

Next week, the day Czech parliament resumes, Walek will be in San Francisco to discuss the country's progress with its same-sex marriage campaign, "We Are Fair," and to raise money for the campaign.

In 2016, Walek was living in San Francisco working at Out & Equal Workplace Advocates as a Fulbright scholar. There, he learned about Czech and transnational companies to get more involved in LGBT rights and worked on a global platform, reported the B.A.R. at the time. Married, but not legally recognized in the Czech Republic, his architect Dutch husband, Willem van der Bas, joined him during his year abroad.

Before he returned home, Walek, who was chair of Prague Pride, partnered with the organization to launch the marriage equality campaign. He now focuses solely on the campaign.

The campaign is tailoring other country's failures and successes and research about same-sex marriage to Czech sensibilities for fairness in its arguments and public dialogue.

Kristina Martiskova, a 28-year-old pansexual woman, who is a queer feminist activist, told the B.A.R. that the Czech's marriage equality campaign is much more coordinated than a previous one for second guardian adoption several years ago.

"This campaign is better organized because they have contacts with all the parties in the parliament," she said.

Martiskova noted that the marriage equality organizers have also gained broad public and celebrity support and are media savvy, keeping the issue in the news.

Due to the activists' strategy, Martiskova doesn't believe the members of the Czech parliament can ignore the issue like they did with the second guardian adoption, which ultimately failed when lawmakers voted on it.

"They can't really push the issue off the table just like they did the last time," she said. "Hopefully, we will get some results soon."

Activists first got wind that Babiš was going to come out against same-sex marriage on the TV program. They mobilized, sending him facts about marriage equality. Lesbian Czech-born tennis legend Martina Navratilova, who has been recently criticized for her stance on trans women in sports, texted a message to Babiš in favor of marriage equality.

Babiš, who is known for changing his mind, flipped his position.

"Without them, we would not make it," he said, estimating that the cause might have picked up 20 votes due to the prime minister's public support.

In June 2018, 48 lawmakers in the lower house supported the marriage equality bill, but a week later, 37 MPs sponsored the opposition's bill, said Walek.

The Czech senate, which is dominated by the conservative Christian Democratic Party, is against the bill. Zeman has stated he might veto the bill when it comes to his desk.

"We are saying 61 percent of Czech support for [same-sex] marriage and they were basically saying not even 20 percent support marriage [equality]," said Walek. "It turned out that those numbers that they were producing were fake."

Michal Pito?ak, a 32-year-old gay man who is co-founder and a core volunteer of the Queer Geography Association, believes Czechs support marriage equality, but there is only a short amount of time before opinions will change.

"I think the situation now is ready for marriage equality," he said, expressing concern about the anti-LGBT movement's growth. "It is only about how long the 'ready' will last."

MPs have until May 10 to continue discussing the two bills.

"Right now, everyone is interested in having the discussion," said Bohdana Rambousková, a 40-year-old ally who is the public relations manager of Prague Pride.

Yet, activists are on alert.

"The opposition is much stronger right now and they are scaring people," he added, noting that they are bringing in foreign anti-LGBT speakers, such as Millie Fontana, an Australian woman raised by two mothers who is anti-same-sex marriage.

"I'm just expecting that Kim Davis will come sooner or later," he said, referring to the anti-gay former Kentucky clerk. "Anything can change."

In San Francisco, the Czech marriage equality event takes place Tuesday, April 16, at 7 p.m. at the Pilsner Inn, 225 Church Street. The suggested donation is $25 (includes two beers). Checks will be accepted. Donations by U.S. citizens are tax-deductible. All proceeds will go to the Czech Marriage Equality Campaign. To learn more about the campaign or to donate directly, visit www.fairmarriage.org.