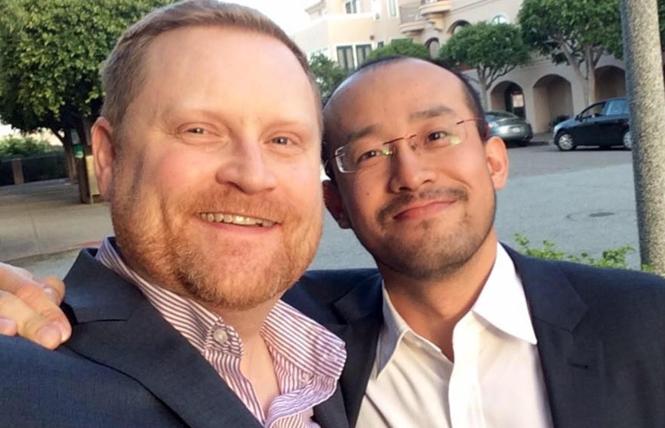 "Congratulations! Now, we need to talk to you about increasing your rent."

These were the words I heard upon calling my landlord three years ago when I notified her I had just gotten married and my new husband, Sheng "Bruce" Yang, would be moving in with me. I had hoped simply for an update to her, along with a request to put his name on my lease. Instead that frightening response was instantaneous.

I said, "No, I don't think that's legal. He's my husband, and we just got married. He's a family member."

She hung up by saying she was going to have her lawyer look into the issue and she'd get back to me.

Being someone who's been involved in policy work my whole career, I had the wherewithal to read the code around renter's rights before I made that call. I also had called the San Francisco Rent Board just to clarify the law. So I knew I had the upper hand and I knew I was in the right to have my new husband move in.

They still have not put his name on my lease. That's important to us because my husband, who was born in China, has his green card sponsored through our marriage. And in all those myriad pieces of paperwork that we need to show proof of our real loving marriage, they request a copy of our lease with both our names on it. I've been fighting for that accommodation for the three years since without success.

The reason they don't want to put his name on the lease is because of the statewide Costa-Hawkins Rental Housing Act. Costa-Hawkins prohibits "vacancy control," meaning that if a tenant moves out or dies, the apartment can then be rented to a new tenant at market-rate. Because my husband's name is not on the lease he would not be eligible for the rent-controlled rate we currently have should I die or otherwise leave the apartment. We're married. We've got our lives built around each other now. What is mine is his, at least in theory.

It is unfortunate that Proposition 10, the Affordable Housing Act, last November did not pass because it would have repealed Costa-Hawkins. The historic wrongs Costa-Hawkins has done to local rent control capabilities now unfortunately continue. My story is a simple one, but there are far worse Costa-Hawkins stories of people forced out by speculators, intimidated by landlords or the process, or who never gained rent control at all because they live in newer buildings.

When I moved here 20 years ago, I drove a U-Haul truck across the country with all my belongings, put them all in storage, and couch-surfed for a while. I had no income, no job, and barely knew anyone. But it was one of the happiest times in my life — because I was here, in San Francisco. Just like many other young LGBTs who dream of living here, I gave up everything to get here. However, today, I don't know how I would be able to do it if I was in the same situation. Young LGBTs looking for the hope that is San Francisco are confronted now with a city that is outrageously expensive. The cost of just living day-to-day in San Francisco is out of control. The cost of housing in San Francisco is horrifying.

When I got my first job in San Francisco, I quickly realized I could not afford my dream to live in the Castro. I eventually found a small studio in the lower Nob Hill/upper Tenderloin area of town, thinking I might move into the Castro once I could afford it. Twenty years later, I not only couldn't afford a move to the Castro, but I can't even move to an open one-bedroom in my own building without having to deal with exorbitant market rates.

As a former co-chair of the Alice B. Toklas LGBT Democratic Club, I have spoken out on strengthening rental laws in our city. As a former staffer for former gay state Senator Mark Leno, I had the chance to work on his tenants rights legislative initiatives and work directly with constituents and community groups. Through his office I was able to host an AIDS Housing Resource Fair at the LGBT Community Center with such groups as the AIDS Housing Alliance (now Q Foundation), San Francisco AIDS Foundation, AIDS Legal Referral Panel, Black Coalition on AIDS, AIDS Emergency Fund, and others.

Upon swearing me onto the rent board March 29, I told Mayor London Breed that I wanted to use this new platform as a way to speak out on the struggles that others in our LGBT community, especially those living with HIV/AIDS, are having just trying to stay in the city they call home. I told her we have an unfortunate out-migration of longtime residents because of these costs and the new LGBTs trying to move here, like I once did, are priced out. I hope to do my part through this new role as a commissioner on the rent board in trying to solve the crisis we have before us.

Reese Aaron Isbell is a commissioner on the Rent Stabilization & Arbitration Board (rent board). In addition to his prior service listed above, he served as a member of the Community Advisory Group with Bridge HIV and the international HIV Vaccine Trials Networks on outreach to the HIV/AIDS community in San Francisco, and participated in early medical studies in what would eventually become PrEP.