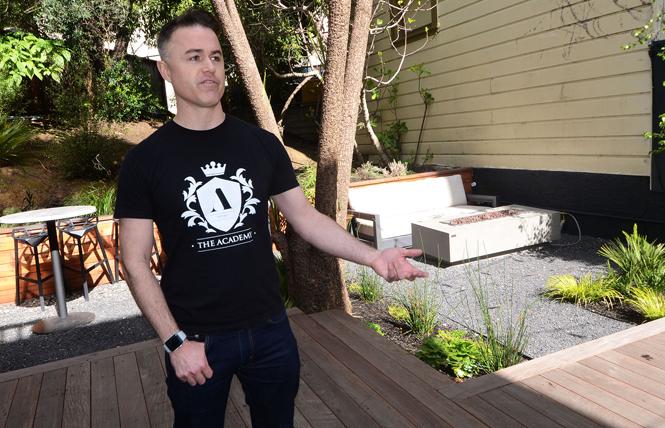 Nate Bourg, co-owner of the Academy social club, discusses plans for the backyard terrace of the facility. Photo: Rick Gerharter

Two years after opening, a gay-owned social club in San Francisco's Castro district is looking to expand its membership as it seeks city approval for the permits it needs to remain open.

Business partners and friends Nate Bourg and Paul Miller started the Academy, in a historic gay bar space at 2166 Market Street, as a way to offer people, whether they are LGBT or straight, a place to connect and socialize outside of the typical bar environment. Memberships begin at $99 a month, with yearly dues of $100, and provide unlimited access to the space.

About 300 people have joined since the Academy opened May 31, 2017, though they are predominantly gay men. Bourg and Miller, both gay men themselves, would like to see more women and transgender people become members.

"Personally, I've met with so many people I wouldn't have connected with at all," said Bourg of the connections he has made through the social club, the only one focused on the LGBT community in the city.

Jean Gibson, a straight woman who is the regional manager for Walgreens' specialty pharmacies, joined the social club in September 2017 after being introduced to it by one of her gay friends. He had posted a story about social clubs on Facebook that intrigued her, recalled Gibson.

"Most of them sounded really exclusive and snobby. The last one listed was the Academy and it noted how open it was," she said. "I messaged him that I really want to join but I don't think they are going to accept ladies. He invited me to an event and, within an hour, I joined because I had such a good time."

The membership cost is "reasonable," said Gibson, and there are a plethora of different events, from book clubs and wine tastings to fundraisers for local nonprofits, that the social club hosts.

"It is a nice grown-up alternative to bars," she said. "They have events every night they are open. There is something for everyone."

As Bourg told the Bay Area Reporter recently, "We are as far from an elitist institution as you can get."

Bourg had been working for the San Francisco Symphony when he first met Miller four years ago. Miller was a co-owner in two former gay bars at the time.

When they conceived of the Academy, their original business plan included more of a retail component since they were taking over a ground floor storefront in the upper Market commercial corridor. It had previously been leased by a watch store, though decades ago it was the site of a notorious gay bar called the Balcony.

Bourg and Miller envisioned selling the home decor items they selected to decorate the space — it feels like stepping into a well-appointed baroque living room — and leased the sidewalk fronting glass-enclosed space to two barbers. While the barbershop component remains, the Academy no longer sells furnishings.

Complaint Filed
Its lack of a large retail component raised questions over its usage of the storefront, leading to someone filing a complaint against the Academy for being a non-conforming use. Its usage of the property's backyard area for events also was flagged.

In order to come into compliance with the city's zoning rules, the Academy is seeking conditional use permits to be designated as a general entertainment use and permission to use the patio. The city's planning commission will take up the permit requests at its meeting Thursday (April 4).

Planning staff has recommended the oversight body approve the permits. In her report, planner Bridget Hicks determined that it would add to the vibrancy of the commercial district, which has been plagued by a glut of vacant storefronts along upper Market Street for years.

"The project will fill a vacant tenant space on the vibrant Market Street corridor with a multi-purpose general entertainment use that will serve the surrounding community and city as a whole," wrote Hicks.

Under a zoning change proposal for upper Market Street introduced last month by gay District 8 Supervisor Rafael Mandelman, who represents the Castro, general entertainment uses such as the Academy would be considered a "principal use" on the first and second stories of buildings and would not need to seek conditional use permits in order to open.

The Castro Merchants business association voted to support the Academy's permit request. Steve G. Porter, general manager of the restaurant Harvey's in the heart of the Castro and a member of the Academy, also argued on its behalf in a letter he sent to the planning commission.

"As a club member and neighborhood merchant I see the success of the Academy as vital to the Castro," wrote Porter. "At a time when there are record high storefront vacancies in the area, innovative uses of ground floor retail space should be encouraged and made easier. Approving these permits is the right thing to do for the interests of the neighborhood."

Yet Chris Wyman, a gay resident of the city, argued in a letter he sent the oversight body that it should reject the social club's permit request.

"I believe that the expansion of this Private Members Only Club (the Academy) with membership dues of $99+ per month will only further contribute to the gentrification of the neighborhood," he wrote. "I'm in favor of increasing the number of LGBTQ+ spaces in the area, but this business makes that type of space available only to a select few."

Bourg and Miller are hopeful that the planning commission will approve their permits so they can turn their focus on expanding the Academy's membership. They are one of the least expensive social clubs in the city, said Bourg.

"We will make it work for people in terms of the cost if we want someone to be a member," he said.

To learn more about the Academy and how to become a member, visit its website at https://academy-sf.com/.