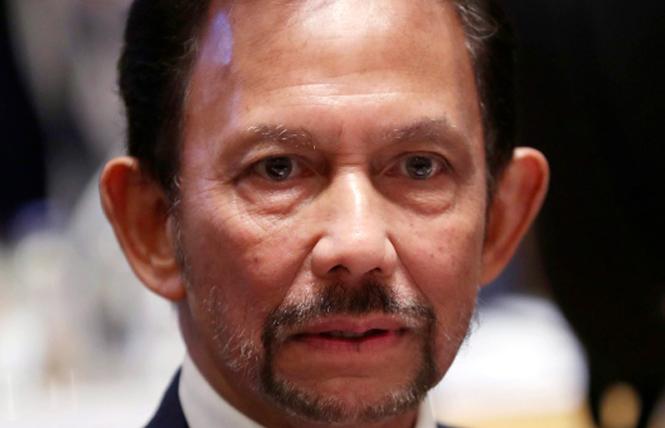 LGBT people will face being stoned or whipped to death starting this week when Brunei fully implements Islamic criminal codes based on sharia law.

The laws also include the death penalty for adultery and rape. Thieves face having a hand or a foot cut off if caught.

The laws were announced by the small, Muslim-majority monarchy five years ago by Sultan Hassanal Bolkiah, 72, the kingdom's prime minister. However, the country has been slow to implement them.

That was until December 29, when the country's attorney general posted a notice that the laws would be effective starting in April. They were set to go into effect April 3.

Currently, only Iran, Mauritania, Saudi Arabia, and Sudan have the death penalty for homosexuality. However, it appears the law hasn't been carried out in recent years, United Nations spokeswoman Ravina Shamdasani told Al Jazeera.

Brunei itself hasn't carried out an execution since 1957, according to the U.N.

The country's actions brought condemnation by the U.N. and world leaders, along with immediate outcry by global LGBT and human rights advocates and international celebrities.

Brunei, a former British colony, inherited its anti-sodomy law. However, unlike its neighbors, Brunei is the first in its region to severely punish homosexuality by invoking the death penalty under Islamic sharia law.

The oil-rich country has a population of around 400,000 and is ruled by Bolkiah, the world's second-longest reigning monarch.

The anti-LGBT law is a move by Bolkiah to become more "culturally Islamic" in his vision, Brian Harding, deputy director and fellow of the Southeast Asia Program at the Center for Strategic and International Studies, told the Washington Post.

In a statement posted on the Brunei government's website announcing the implementation of the law, Bolkiah said he "does not expect other people to accept and agree with it, but that it would suffice if they just respect the nation in the same way that it also respects them."

Government officials from the European Union and the United Kingdom swiftly denounced Brunei's enactment of the law last week.

Former U.S. vice president Joe Biden denounced Brunei's enactment of the laws on Twitter, writing March 29, "There is no excuse — not culture, not tradition — for this kind of hate and inhumanity."

However, the U.S. government waited a full 24 hours before the State Department responded. The department first said it was "concerned" before finally stating, "We strongly oppose human rights violations and abuses against LGBTI persons, including violence, the criminalization of LGBTI status or conduct, and serious forms of discrimination." The department had been pressed by the Daily Beast to denounce the move.

In a column for Deadline, Oscar-winning actor and activist George Clooney called for reviving the boycott of all nine of the hotels owned by Brunei Investment Agency, an arm of the Brunei government. Those include the Dorchester in London; the Beverly Hills Hotel in Beverly Hills, California; and the Hotel Bel-Air in Los Angeles.

Gay rocker Elton John praised Clooney for his call to action. He tweeted that he and his husband, David Furnish, have boycotted the hotels for years, reported CNN.

In individual statements, the luxury hotels expressed their commitment to equality, respect, and integrity, as well as valuing LGBT rights.

Not backing down
Bolkiah isn't going to bow to international pressure, according to a statement from the prime minister's office March 30.

In a statement defending Islamic law, Brunei officials said, "The (sharia) law, apart from criminalizing and deterring acts that are against the teachings of Islam, also aims to educate, respect, and protect the legitimate rights of all individuals, society or nationality of faiths and race."

Thousands protest US right-wing conference in Verona
A reported 20,000 LGBT and women's rights demonstrators filled the streets of Verona, Italy March 30 to protest the World Congress of Families hosting a three-day conference in the city.

France 24 reported that organizers, a coalition of about 70 Italian civil rights associations, estimated the turnout to be near 100,000 people.

Verona is being dubbed Italy's first "pro-life city." Lorenzo Fontana, a conservative Catholic and Italy's minister for families, is from the city. Activists believe that's why it was chosen for the conference.

Yuri Guaiana, the campaign manager for All Out, an LGBT rights organization based in the U.K, noted Italy is ripe for conservative activism due to its recent history becoming a democracy and burgeoning LGBT and women's rights movements.

The congress partnered with Italian pro-rights groups led by Interior Minister Matteo Salvini, who was a featured speaker at the event, and other conservative Italian leaders, including Fontana.

The conservative political leaders were joined by a host of international anti-gay and anti-choice leaders.

The event was hosted under tight security.

The congress has been officially recognized as a hate group by the Southern Poverty Law Center.

The Vatican kept its distance from the event.

Cardinal Pietro Parolin told France 24, "We agree on the substance, but not the mode."

The ruling came after a two-and-a-half-year legal battle and four-year exile from the islands for a lesbian couple and their 5-year-old daughter after Vickie Bodden Bush, 44, who is from the U.K. and Honduras, couldn't obtain a spousal visa.

Chief Justice Anthony Smellie agreed that Chantelle Day, 32, who is from the Cayman Islands, and Bodden Bush had suffered an "indignity."

The only way to repair it was "opening the institution of marriage to them," therefore legalizing same-sex marriage in the British territory.

"We're just so happy right now," Day told the Daily Mail. "This is the result we were looking for. True equality, dignity, and equal treatment, and we're really grateful for it."

The couple lived for two years in Dublin and two years in London before they decided to fight for their rights and filed a court case.

"If I was to go back home, I wanted to do it on an equal footing with a straight couple," said Day.

The couple's attorney, Peter Laverack, congratulated the women on their win.

"Same-sex marriage is now lawful in the Cayman Islands! Congratulations to my clients Chantelle and Vickie."