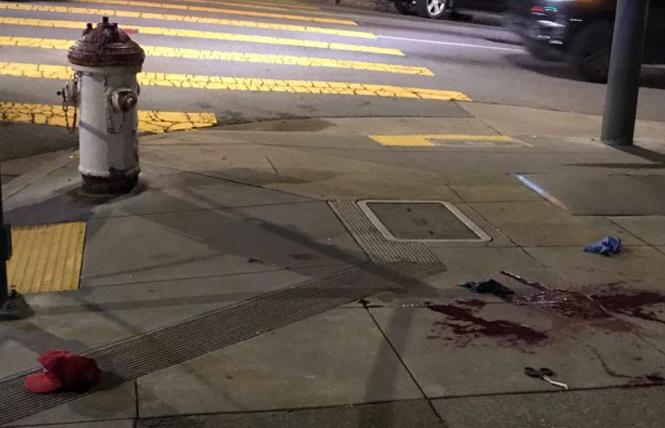 San Francisco police are still searching for an assailant who, on Friday night, slashed a man's hand with a sword after an altercation in front of the Church of 8 Wheels, a queer-friendly roller rink in the Western Addition, according to authorities.

The suspect was allegedly wearing a Make America Great Again hat as pictures of the scene and witnesses indicate, though police are not confirming what the hat specifically said. Pictures show a red MAGA hat near a pool of blood on the sidewalk Friday night near the rink, which was hosting an adults-only roller disco. MAGA is a slogan used often by President Donald Trump.

It is also alleged that the suspect was screaming anti-gay slurs at some of the customers as they entered the rink, located at 554 Fillmore Street, according to witnesses and the man who runs the popular roller rink, David Miles Jr.

According to San Francisco Police Department Officer Adam Lobsinger, the suspect and another man got entangled in a verbal altercation when the victim allegedly knocked off the suspect's hat. The suspect then drew a sword and slashed the victim's hand. Police responded to reports of a stabbing around 9:50 p.m. March 29. The victim was taken to the hospital with non-life-threatening injuries.

"We can't comment on what the hat specifically said, but can say the victim flipped the hat off of the suspect and, as a result, the suspect produced a large sword, a very large blade, and cut the victim's hand and fled the scene," Lobsinger told the Bay Area Reporter Monday. "We can't confirm anything that was said or the specific events leading up to the incident."

Police took witness statements and collected surveillance footage from nearby businesses. The case is still under active investigation. Police originally reported that the victim was wearing the hat, according to the San Francisco Chronicle, but changed their statement late Saturday.

One witness took to Twitter to talk about what happened. Scott Sweeney, 24, attended the roller skating rink on Friday night with his girlfriend, his Twitter account states.

"Tonight, a #MAGA chud targeted a queer friendly roller skating event in San Francisco. We had seen him earlier as we were going in, he called us faggots. He followed us up to the event with a sword, we made it in okay, but he attacked someone outside. Fuck white supremacy," read a March 29 tweet.

His Twitter feed also shows the aftermath pictures with the MAGA hat. The Twitter thread indicates that Sweeney and his girlfriend saw the suspect wearing the MAGA hat standing near the entrance of the rink glaring at them. It is also detailed that Sweeney flipped the MAGA hat-wearing suspect off and that is when he began yelling anti-gay slurs at the couple.

When the B.A.R. spoke with Miles, who started the roller rink, which is located in the old building that once housed Sacred Heart Catholic Church, he also said he heard the man yelling anti-gay slurs.

"The guy was outside yelling at people coming inside," Miles, a straight man, said Monday. "He was calling people fags and stuff like that."

Although Miles did not witness the event and was inside the rink when it happened, he rushed outside to help the victim once he heard what happened.

"I saw a guy on the ground and his arm was bleeding really, really bad. It was just oozing onto the sidewalk," Miles said, at which point paramedics and the police arrived and took over the situation.

Miles does not remember seeing a MAGA hat, but said other witnesses were talking about it right after the incident happened. Miles also said that after the suspect slashed the victim's hand, the victim chased after him, until realizing how badly he was bleeding.