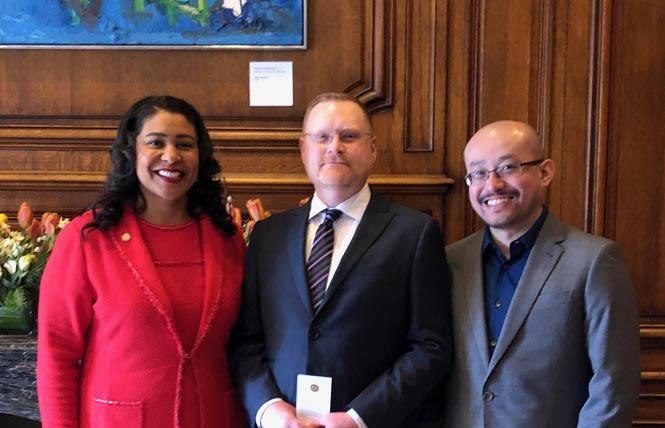 San Francisco Mayor London Breed has named well-known gay Democratic Party activist Reese Aaron Isbell to the city's rent board. It is believed he is the first out gay man to serve on the commission.

Serving as a tenant vote on the board that approves the annual rent increases for residents of rent-controlled units, Isbell, 48, has struggled to afford to live in the city since arriving 20 years ago. He and his husband, Sheng "Bruce" Yang, live together in a studio apartment that is rent-controlled in the city's Lower Nob Hill neighborhood.

"Thankfully, I have rent control and been able to stay here in the many ups and downs of San Francisco's environment and my own personal ups and downs," he told the Bay Area Reporter Friday just prior to being sworn in by Breed. "I have been very fortunate to have that rent control."

The five-person rent board is composed of two tenant representatives, two landlords, and a neutral person all appointed by the mayor. In a statement to the B.A.R. Breed noted that, not only has Isbell been "a longtime renter and dedicated public servant," but also a longtime LGBT community leader.

"He has worked professionally and personally to advance the rights of tenants and marginalized communities, including on behalf of people living with HIV and others who are vulnerable to housing insecurity," stated Breed, a longtime renter herself whose family has also struggled to afford living in the city. "As a renter he lives every day knowing the challenges tenants face and I am confident he will be a strong voice on the rent board."

Janan New, executive director of the San Francisco Apartment Association, told the B.A.R. that she knows of at least three gay men who have previously served on the rent board, one a tenant and the other two landlords. But it doesn't appear that their being members of the LGBT community was highlighted by the mayor's office when they were appointed or reported on by the media at the time.

Isbell told the B.A.R. he welcomes the ability to help decide not only how much landlords can increase rents each year but also adjudicate issues brought before the commission by tenants. The rent board has already approved a rent increase of 2.6 percent effective March 1, 2019 through February 29, 2020.

"I look forward to being part of those discussions and dealing with the realities in San Francisco for renters," said Isbell, who is currently looking for work.

As the B.A.R. noted in a story last fall, lsbell left his position overseeing government affairs for the California Life Sciences Association in order to return to the Midwest to campaign for Democrats running in the November midterms. He moved back in with his parents in Independence, Missouri to help get out the vote for fellow Missourian Claire McCaskill, who lost her re-election bid for U.S. Senate, and attorney Sharice Davids, who won her race to become Kansas' first openly gay, Native American member of the U.S. House.

Since returning to San Francisco Isbell has focused on his volunteer work as he seeks a new job. His husband is a software developer for a tech startup.

When Yang moved in with him three years ago into the studio Isbell has called home for two decades, their landlord tried to raise their rent when Isbell sought to add Yang's name to the lease. When the couple married, Yang received a green card and having documentation of his residence has been an ongoing concern.

"When my husband moved in I called my landlord and said I am getting married and would like to put my husband's name on the lease. She said, 'Congratulations,' and we are going to raise your rent. I said, no, I don't think that is legal," Isbell recalled. "She said they would look into it, which they did, as did I. It is illegal. If a family member is moving into an apartment it is legal and does not trigger any kind of increase."

Eventually the matter was resolved without the couple facing a spike in their rent. But to this day Yang's name has not been added to the lease.

"We got a letter from them that my spouse would live with me but it didn't say his name. I have tried to get his name on the lease but clearly, because of Costa-Hawkins and vacancy control laws, they don't want his name on the lease," said Isbell. "They are not required to do that. In our case, we were really hoping they would ... We'd like to show the immigration authorities we live together, and have found other ways to do so, but that has been an annoyance."

They can't afford to move, said Isbell, into either a larger apartment in their building or another neighborhood, due to the high cost of rents in the city. The median rent in San Francisco for a one-bedroom is $2,470.

He faced a similar situation when he first arrived in the city and wanted to live in the gay Castro district. But even back then Isbell said rents in the gayborhood were too expensive for him.

"I was just like a lot of my brothers and sisters in the LGBT community who wanted to find the hope that is San Francisco. I wanted to live in the Castro but quickly learned I couldn't afford it even at that time," Isbell recalled, adding that he thought he would only live in Lower Nob Hill until he could afford a place in the Castro. "I realized I couldn't anytime then or afford it now. I can't afford to move to the apartment next door to me, which is a one bedroom, because it would go to market rate."

It is that personal experience Isbell brings to the rent board, which meets monthly. His first meeting will be Tuesday, April 9.

UPDATED 3/29/2019 to include comment from Janan New, executive director of the San Francisco Apartment Association.