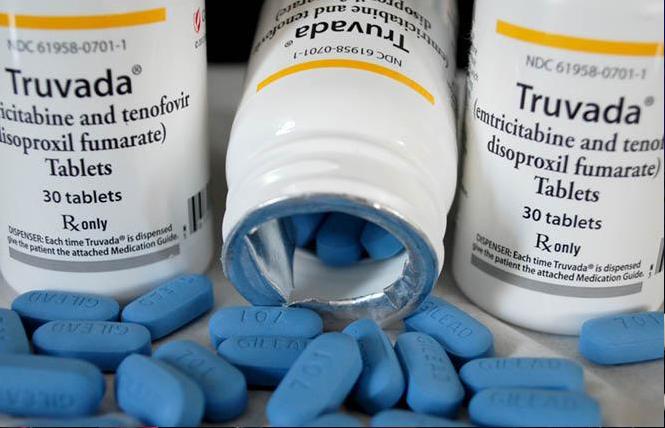 State Senator Scott Wiener's bill to allow PrEP to be obtained without a prescription has raised concerns ahead of its first hearing next month.

A move by California lawmakers to allow over the counter access to PrEP is raising concerns about patient privacy and adherence to the HIV prevention medication.

As the Bay Area Reporter first reported in December, gay state Senator Scott Wiener (D-San Francisco) is a lead author of Senate Bill 159, which would authorize pharmacists to furnish PrEP, or pre-exposure prophylaxis, and PEP, or post-exposure prophylaxis, to patients without a physician's prescription. Gay Assemblyman Todd Gloria (D-San Diego) signed on as a co-author and Equality California, the statewide LGBT advocacy organization, has made the bill one of its top legislative priorities this session.

Just as people do not need a prescription to obtain birth control pills from a pharmacist, neither should they need one to obtain the HIV prevention medications, contend the lawmakers and advocates. The actual language of the bill was recently released and would require pharmacists to undergo training devised by the California State Board of Pharmacy to learn about both HIV prevention medications and how patients are supposed to take them.

Pharmacists would have to screen patients for HIV and ensure they have received a negative HIV test within the last seven days. They would also be required to counsel patients about the side effects of the medications and "the importance of adhering to the drug regimen, testing and treatment, as applicable, for HIV and sexually transmitted diseases, behavioral risk reduction support, and pregnancy testing."

They would also have to document the use of PrEP or PEP in the patient's health record and notify their primary care provider or, should they not have one, inform them where they can go to receive health care services.

After seeing the bill language, the San Francisco AIDS Foundation has signed as a co-sponsor.

"SB 159 is an innovative approach to removing barriers and expanding access to PrEP and PEP to prevent HIV infection," Courtney Mulhern-Pearson, the nonprofit's senior director of policy and strategy, told the B.A.R. "PrEP is the most effective primary prevention strategy available to our community, and it's working as a public health strategy. Getting access to PrEP for everyone at risk for HIV will require changing health systems, and we're supportive of this bill's intent to broaden access."

But the powerful California Medical Association informed lawmakers last week that it would oppose the bill unless changes were made to it. Primarily, it is seeking to have PrEP struck from the bill so that pharmacists would only be allowed to furnish a portion of PEP over the counter. Patients would then need to see a doctor to receive the rest of the PEP regimen.

"As currently drafted, pharmacists would have full discretion to provide PrEP and PEP without any requirements that a patient see a physician. Prescribing a daily, long-term use, medication of strong HIV regimen drugs to healthy, HIV-negative patients demands a high degree of safety and consideration that is only achieved safely by the patient-physician relationship," wrote Morgan Carvajal, a legislative advocate with the CMA's Center for Government Relations, in a March 19 letter to lawmakers.

She added that deciding if a person should use PrEP "is not strictly objective and should be based on ongoing conversations between the physician and patient. Along with risks from long-term use, including impaired kidney function and depleting bone mineral, PrEP can also cause drug interactions and requires regular checkups and screening during use."

Wiener has been working closely with the California Pharmacists Association in drafting the bill. He told the B.A.R. that he has confidence pharmacists can be properly trained on the usage of PrEP and PEP so that they can safely administer the medications.

"Clearly pharmacists need to receive that training so they can provide PrEP and PEP without judgment or stigma," said Wiener. "We are all committed to making sure pharmacists have the tools they need to succeed."

As for adherence concerns, Wiener said it is going to be an issue no matter where people obtain PrEP and PEP. In terms of PrEP, people can either take it daily or on demand in a regimen San Francisco health officials have dubbed PrEP 2-1-1. It requires a person take two pills of Truvada (tenofovir/emtricitabine) 24 hours or, at minimum, up to two hours in advance of having sex, another pill the next day, and a final pill the day after.

"Regardless of where you are getting PrEP, whether from a physician or pharmacist, a person must receive information about adherence," said Wiener. "Whether it is daily adherence or 2-1-1 that is always a challenge making sure people receive the information and the information sinks in."

There is now a technological answer for how to help people adhere to their PrEP regimens. Healthvana, the largest HIV technology platform in the U.S., and UrSure, which improves adherence to HIV medications with diagnostic tests, are working with health clinics across the U.S. on the issue.

"Adherence is something that is an issue with PrEP," acknowledged Healthvana CEO Ramin Bastani. "Everyone has worked hard to make PrEP available for use and to scale it up. But that is not the end of the journey there. We also need to make sure people are taking it as prescribed and adhering to it. Otherwise we are not going to see what we all want, a reduction in HIV."

The companies have teamed together to offer the Healthvana app people can download to their cellphones that will alert them to when it is time to see their health care provider for a check up to ensure they continue to be HIV-negative while using PrEP. And they also will mail Ursure's urine-based testing kit to a person's home that they then send back to a lab in order to monitor their PrEP usage. The results are sent directly to the person via the app and to their doctor.

"Ursure measures a patient's urine to make sure those struggling with adherence receive more targeted counseling or intervention through Healthvana and get them back on track," explained Dr. Giffin Daughtridge, the company's co-founder and CEO. "Usually you give the results to the provider and they have to call the person. But with Healthvana, we can give the results to both the patient and provider. They can communicate through the platform."

Asked about SB 159, Daughtridge told the B.A.R. that he is supportive of "anything we think will increase access to PrEP. Its uptake over the last several years has been a lot slower than people had hoped."

The Senate Business, Professions and Economic Development Committee is expected to take up the legislation April 8.

Gay mayor loses bid for state Senate
The gay mayor of Lynwood appears to have fallen short in his bid for the state Senate seat vacated by gay lawmaker Ricardo Lara in January when he took his oath of office as state insurance commissioner.

José Luis Solache, first elected to the Lynwood City Council in 2013, landed in fifth place with 7.24 percent of the vote in the 12-person race, according to the unofficial returns Wednesday morning.

As expected, Long Beach City Councilwoman Lena Gonzalez was the top vote-getter in Tuesday's special primary to represent the 33rd State Senatorial District. She had 30.60 percent of the vote and is likely to face off against Republican Jack M. Guerrero in the June 4 special runoff election.

He landed in second with nearly 15 percent of the vote. Whoever wins the seat will need to run next year for a full four-year term.

Gonzalez, a Democrat, had secured wide backing from state and local elected leaders in the race, including the endorsement of Lara, and is expected to succeed him in the Legislature. Solache, who had planned to run for the seat when Lara termed out in 2020, had raised a significant amount of money for his campaign and shared EQCA's endorsement with Gonzalez.

But Lara held a number of fundraising events with Gonzalez, helping to swing endorsements and dollars her way. A number of out politicians also backed her, leading to private rumblings from Solache's camp about their seriousness of recruiting LGBT people to run for legislative office, which was the focus of an inaugural summit in Sacramento this month for out local leaders from across California.

With Solache out of the Senate runoff, the number of LGBT state legislators will remain at seven. It raises the stakes for next year's legislative races, as the LGBT caucus could see its ranks diminish further if not enough out candidates win their contests.