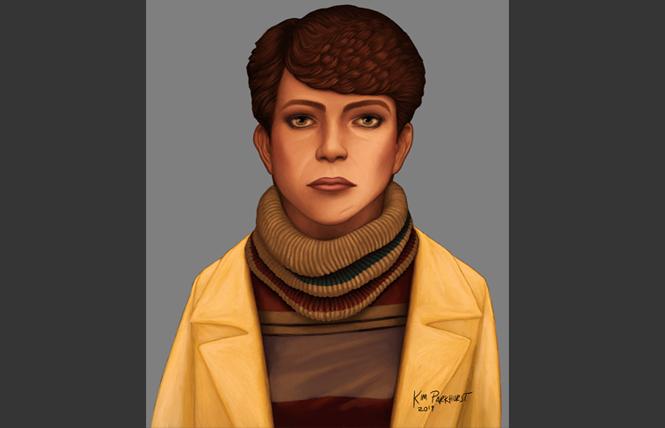 A 35-year-old San Mateo cold case involving the murder of an unidentified, possible trans woman has garnered renewed attention thanks to the Trans Doe Task Force at the DNA Doe Project.

On November 26, 1983, the body of a man, age 19 to 25, dressed in female casual attire, was found near Lower Pillar Point in Half Moon Bay, about 30 miles south of San Francisco on the Peninsula. Because the gender identity of the victim is unknown, the Bay Area Reporter is using gender-neutral pronouns to refer to them.

"It's a classic overkill of a trans person," Redgrave told the B.A.R. last Friday. "We don't have any information on how the victim identifies, but are assuming they must have been a trans person based on the way they were dressed, modest clothing, but still tucking. They were wearing Capri pants, not dressed up for clubbing. We are assuming, but we can't know anything for certain until we know who they are."

The task force brought the case to the attention of the San Mateo County sheriff's and coroner's offices, which it has partnered with since January on the case, along with the National Center for Missing & Exploited Children. In the most recent San Mateo County newsletter circulated Thursday, March 22, it mentions the cold case and links to a post on San Mateo County's Facebook page.

"The San Mateo County Coroner's office is hoping for a successful outcome with finally identifying and providing a name for this 35-year cold case homicide victim," read the March 20 post that said its image of the victim — older than the current one — was produced by the National Center for Missing & Exploited Children as requested by the coroner's office (the B.A.R. featured that image in a front page August 8, 2002 article that had also sought the public's help in identifying the victim).

The social media post also stated that the victim "may have been transported to the location from the Tenderloin area of San Francisco." Redgrave said, however, that the detective working on the case has said there is no evidence to corroborate this.

Emily Tauscher, assistant coroner at the San Mateo County Coroner's office, said there is a higher likelihood that Pillar Point Doe will be identified because of their Caucasian identity. It's more likely that family or distant relatives of Pillar Point Doe are within the greater pool of the general population that have had genealogical testing done.

She said that although the coroner's office, due to a lack of resources, does not have an employee dedicated full-time to identifying does, they are working on the case, but that DNA Doe Project is doing the testing and extensive research for it. The coroner's office has entered Pillar Point Doe into national databases for missing persons, including the National Missing and Unidentified Persons System, or NAMUS, and the National Crime Information Center, used exclusively by law enforcement.

Working on a case that happened [nearly] 40 years ago comes with its challenges, Tauscher said.

"How cases were investigated sometimes just had different standards and practices back then. It's more robust nowadays," Tauscher said. "We didn't have as much documentation then as we do now. It can be difficult to put the pieces together."

When it comes to gender identity and expression, however, investigators have a deeper appreciation and victims are "treated with the utmost respect and sensitivity," she said.

"We are rather limited at this point, but 40 years later we are really trying to give this person a name," she said, adding that before the name of the doe is released, the office would need to first notify the next of kin.

According to the coroner's office website, the victim was a white male with short, brown hair and approximately 5 feet 10 inches tall and 140 pounds. The clothing they were wearing included light, yellow knee-length "clam diggers," a light yellow jacket, a multicolored turtleneck T-shirt, black nylon net stockings, brown-colored pantyhose, blue, bikini-style underpants, beige-colored lace underpants, and a beige-colored bra and sponge "falsies." They were also wearing jewelry that included two white metal rings and a white metal necklace with a crucifix pendant. There are no known suspects or persons of interest, Redgrave said.

A 2011 article from the Mercury News said that crime scene photos showed the victim's "mouth open and eyes shut, laying in a twisted pile near a set of tire tracks left in the sand." The body is buried in an unmarked grave in Colma, according to the article.

"As far as the investigation, it seemed like it was treated as well as it could have been at the time, due largely to the coroner in the area having a very high interest in doe cases," Redgrave said. "It seemed to have been given more adequate care than I have seen in other places."

He also said that the San Mateo sheriff's office is "doing a really good job."

The sheriff's office and NAMUS could not be reached for comment by press time.