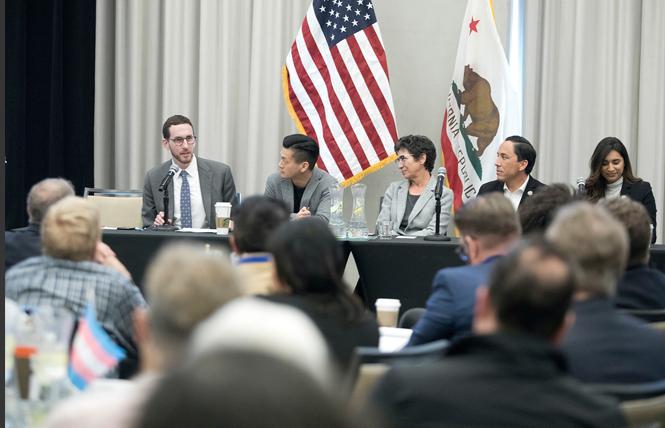 The dozen LGBT rights bills that Equality California is co-sponsoring with state lawmakers this year focuses largely on the rights of transgender people and LGBTQ youth.

One of the more controversial is Senate Bill 201, the Intersex Bodily Autonomy bill authored by gay state Senator Scott Wiener (D-San Francisco). It would ban medically unnecessary surgeries performed on intersex infants, but as the Bay Area Reporter reported online Monday, the powerful California Medical Association is officially opposed to it.

Another bill being watched closely is SB 159 co-authored by Wiener and gay Assemblyman Todd Gloria (D-San Diego). It would authorize pharmacists to furnish PrEP, or pre-exposure prophylaxis, and PEP, or post-exposure prophylaxis, to patients without a physician prescription. Just as people do not need a prescription to obtain birth control pills from a pharmacist, neither should they need one to obtain the HIV prevention medications, contend the lawmakers, who are chair and vice chair, respectively, this year of the Legislative LGBT Caucus.

Wiener is also the author of a third bill attracting intense opposition from conservative groups. SB 145 would prevent gay male adolescents from having to be listed on the state's sex offender registry for sleeping with a boyfriend under the age of 18. The bill aims to include a "Romeo/Juliet" clause for gay and lesbian teenagers so they are treated similarly to their heterosexual counterparts.

It would apply to teens aged 15 or older who engage in consensual sex with a partner within 10 years of age. While an 18-year-old boy or girl who has sex with a 17-year-old partner could still be prosecuted for statutory rape, they would not need to register as a sex offender if convicted under Wiener's bill.

One bill that could face close scrutiny is Assembly Bill 493, known as the Safe and Supportive Schools Act of 2019, due to its associated costs. It would require public schools to train their staff, from teachers and custodians to cafeteria employees, on LGBT cultural competency and how to address LGBT-based bullying.

Former Governor Jerry Brown had vetoed a similar bill last fall due to its price tag. Gloria and State Superintendent of Public Instruction Tony Thurmond, who had carried it last year when he served in the Assembly, reintroduced it this year in hopes of seeing Governor Gavin Newsom adopt it.

"When you think about a school's staff, it is not just teachers. It may be the custodial staff and bus drivers. Workers in the cafeteria can be on the front lines to prevent bullying when it is happening," said EQCA legislative director Alice Kessler at a summit for LGBT leaders from around the state last week. "We want to give them the tools they need to do that."

Wiener also reintroduced his bill that would protect transgender inmates in state prisons after it was quietly killed in the Legislature last summer. Known as the Dignity and Opportunity Act and now numbered SB 132, it would require that incarcerated transgender people in California jails be referred to by their preferred pronouns, gender, and name.

Gay Assemblyman Evan Low (D-Campbell) is the lead author on AB 650, which would require law enforcement agencies in the state to collect the sexual orientation and gender identity data of victims in cases of deaths resulting from violent crimes. It would cover homicides, suicides, and hate crimes.

Trans bills
Two bills this year are focused on updating the records of transgender individuals. Assemblyman David Chiu (D-San Francisco) is the author of AB 711, which would require school districts to update the academic transcripts and diplomas of transgender individuals so they use their legally changed names and genders. In an interview Tuesday with the B.A.R., Chiu said he has heard from transgender people who had their requests for updates to their academic records denied by school districts.

Their old documents can out them as being transgender to employers and co-workers or educational officials if they are seeking to apply to college or graduate school.

"Documents with a different name can out people who do not want to be outed," noted Chiu.

SB 741, the first LGBT-focused bill to be authored by lesbian state Senator Cathleen Galgiani (D-Stockton), who is termed out next year, would allow transgender residents of the state who legally change their name and gender to update their marriage certificates and the birth certificates of their children. The process would be similar to how transgender people can petition the courts to seal their original birth certificates and have a revised one issued using their preferred name and gender.

The bill would protect transgender individuals from discrimination when enrolling their children in school, apply for a loan, or have to make medical conditions on behalf of an incapacitated spouse, noted EQCA in a fact sheet.

Under AB 307, co-authored by Wiener and Assemblywoman Eloise Gomez Reyes (D-San Bernardino), the state would establish a grant program for agencies serving homeless youth that would require those funded to train their staff on LGBT cultural competency.

EQCA also announced it will score state lawmakers this year on their support of two resolutions. One that passed both chambers of the Legislature proclaimed February 7, 2019 as Black HIV/AIDS Awareness Day in the Golden State.

The other, ACR 27 by Assemblywoman Wendy Carrillo (D-Los Angeles), honored the late gay African-American civil rights leader Bayard Rustin. Passed by the Assembly, it called on the U.S. Postal Service to feature Rustin on a stamp, similar to the one it issued on behalf of the late gay San Francisco supervisor Harvey Milk.