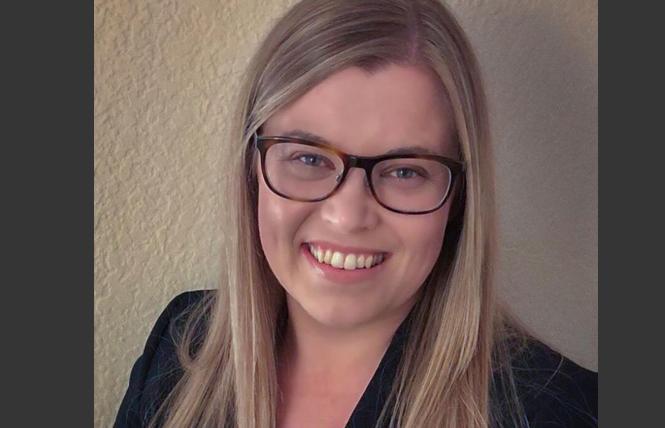 Bay Area Lawyers for Individual Freedom has lost at least three members, including one co-chair, from its board of directors, the Bay Area Reporter has learned.

Though no official announcement has been made, the B.A.R. has obtained resignation emails sent to the board from recently resigned co-chair Sarah Davis and gala co-chairs Tyler Alexander and Austin Phillips, each one detailing internal strife at the nation's oldest LGBT bar association.

BALIF's latest newsletter no longer lists Davis, Alexander, or Phillips on its roster. BALIF's website still lists all three people as being board members on the contact page of its website, though they have been removed from the page listing board members.

Persinger would not confirm how many board members had resigned or the reasons for their exit.

"We have to make sure no individual speaks on behalf of the BALIF board," she said, explaining that once the board meets, it plans to put out a statement.

Multiple comments began to appear on the public BALIF Facebook page about the controversy March 15, some from former BALIF board members. The comments were mostly disapproving of the lack of BALIF's transparency surrounding the resignations.

Although each member who recently resigned gave personal reasons for their departure, multiple sources, as well as content from the resignation emails, emphasized a dysfunctional, toxic environment at BALIF. Sources said that the board's desire to become more inclusive and diverse and to focus more on issues affecting LGBTs of color has resulted in leadership accusing board members of not being supportive of BALIF's vision, though the sources said this is untrue.

The B.A.R. has also obtained an email from Persinger sent to the board that accuses those who resigned of "white fragility" and "institutional racism." White fragility refers to white people's inability to talk about racism and their resulting behavioral reactions when their assumptions about race are challenged, including anger and defense.

Davis' email, with the subject line "Resignation" was sent March 12, and expressed her frustration with fellow BALIF board members Felicia Medina, programming co-chair and amicus co-chair, and Jennifer Orthwein, Conference of California Bar Associations chair and amicus co-chair, as well as Persinger. Davis's email indicates as many as seven board members had quit or decided not to seek new board terms.

"For the past two years, any time anyone disagrees or challenges Felicia or Jen, they receive a personally attacking email. Last year, those emails were frequently sent to the whole board and this year those emails have been more individualized," wrote Davis in her resignation email.

She continued, "A minimum of seven board members have resigned or chosen not to run again because of their pervasive personal attacks. You heard Annick and Felicia dismiss those resignations as progress, complete with additional personal attacks on individuals not present as racists or bullies. But they both ignore the diversity of the resignations. Men, women, nonbinary, and three out of the seven were people of color. I don't think it is progress to lose diverse voices and perspectives."

Medina and Orthwein did not respond to the B.A.R's request for comment.

'Dysfunctional' board
The resignation email from Phillips, also sent March 12, states his reason for leaving.

"My preference to avoid conflict has kept me quiet, erring on the side of complicit and I just won't do that for another year despite my desire to serve the LGBTQI community and have a leadership role with BALIF," he wrote. "This board is dysfunctional plain and simple and unfortunately, a pattern of division and toxicity is the status quo and I am not optimistic that it will change and I refuse to be a party to it anymore."

In Alexander's email, sent the same day, he explained that the board's desire to focus more on intersectionality was a positive thing and that he was resigning for his "disagreement over abusive behavior."

"It is unacceptable to personally attack your fellow directors," he wrote. "I could not believe that there was not a consensus around this last night. In fact, this type of behavior was seemingly protected under the guise that it was somehow advocacy. That is absurd. I have never been in an environment, let alone a professional one, where it is acceptable to lob hurtful personal attacks at one another. To cloak these attacks under the guise of advocacy undermines the very cause purporting to be advanced."

The same day Persinger responded to the resignations in an email sent to the entire board. She began by thanking all members for their "successful" contributions, listing each person's accomplishments with the board.

Persinger wrote in the email that discussions of race and other issues became "intolerable" for many board members, which resulted in a "range of defensive moves — including discussion of removing the only person of color in the room last night from the board."

She also said that she has found no evidence of "bullying or abuse," from Medina or Orthwein and instead found, "countless examples of collaboration, showing up without complaint, offering resources, sharing ideas, and committing to the betterment of BALIF despite push-back, elitism, heightened scrutiny, ego, and discriminatory treatment," Persinger wrote.

A former BALIF board member, Dennis Raglin, spoke to the B.A.R. about what he understands has happened, which echoes the obtained emails. He believes there to be only seven, non-student board members currently, which another Facebook user also said.

In response, Persinger sent an email to the B.A.R. speaking for herself and not the organization. In it, she reiterated many of the points made in the March 12 email she sent to the board.

"From my own perspective, and not speaking for the BALIF board, for the last two years BALIF has been grappling with issues related to the current and historical exclusion of transgender and queer people of color," she wrote. "The BALIF board has had many difficult conversations around these issues. During those conversations, there were requests for POC and white allies to mind their tone and to be civil. Tone policing is rooted in racism and sexism. Similarly, requests for civility are rooted in historic attempts to civilize people of color and women, and, as a result, are inherently unequal."

She added that she has a "fundamentally different view than those expressed in the resignation emails."

Raglin also criticized the fact that BALIF has yet to make any public comment regarding the resignations.

"I find it odd, an organization who's losing its board members not taking a proactive stand to explain themselves," Raglin said.

Other comments on the BALIF Facebook page echoed this opinion.

"What's going on, BALIF? The names of a co-chair and a bunch of board members were dropped from the masthead of this week's newsletter without explanation. Why? BALIF, please let us know what's happening on the board," read a March 15 comment from Liz Noteware.

Other Facebook comments talked about the obligation BALIF has to its financial supporters to give them an explanation for what is happening.

Kate Kendell, former executive director of the National Center for Lesbian Rights and a former BALIF board member, contacted the B.A.R. after it reached out to Persinger. Kendell spoke in support of BALIF in a phone interview with the B.A.R. Monday, March 18.

Though she did not comment specifically on what was happening, she said, "[BALIF] is in the midst of a state of flux," and that it is "common for an organization moving to be more inclusive and representative" to be in "upheaval."

When asked about the allegations of Persinger accusing board members of institutional racism, she replied, "It doesn't mean they are necessarily racist, it's that the focus is on including and elevating voices that have not previously been on the table and that is not their priority," Kendall said, adding that "there are individuals in every organization who just aren't interested in being a part of the leadership" while the organization is transitioning.

When asked how she felt BALIF is handling the transition, particularly not making a public announcement, Kendell said that she does believe it to be in everyone's best interest that BALIF announce that they are focusing on being more inclusive and representative. She sent a letter to the BALIF board saying she "applauded" it in this process of making the transition and that it can be painful.