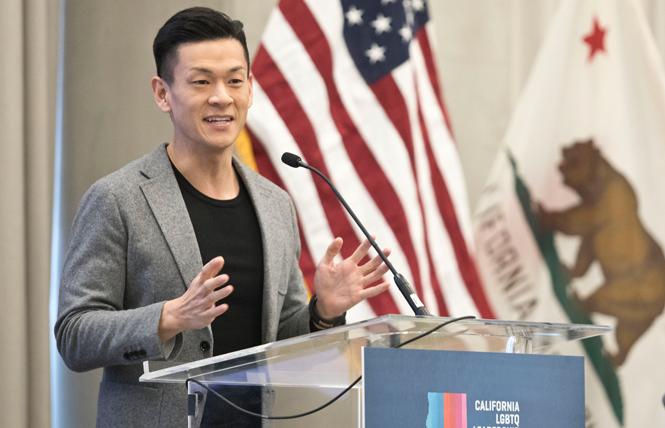 Rather than pursue legislation this year to ban conversion therapy with adults, gay Assemblyman Evan Low (D-Campbell) is instead looking at introducing a resolution that would explain why the practice is harmful for people 19 years of age and older who are struggling to accept their sexual orientation.

It marks the second year in a row that Low has shelved his controversial legislative proposal. Despite getting a bill passed out of the Legislature last year, Low scrapped it before it could be sent to former governor Jerry Brown due to vehement opposition from evangelical religious leaders.

California in 2012 became the first state to ban the practice in youth under the age of 18. Since then 14 other states have followed suit, and several others are expected to do so this year, including Colorado under the leadership of gay Governor Jared Polis.

But banning the usage of conversion therapy on adults has proved to be a much harder fight. Religious leaders throughout the state had feared Low's bill would adversely harm priests and pastors if they were to counsel parishioners struggling with their sexual orientation.

In announcing his decision to scrap his legislation last summer, Low promised to work with religious leaders and LGBT advocates on redrafting it and resubmitting it in the future. But finding a compromise has been elusive, particularly since Low told the Bay Area Reporter in January that he had ruled out granting a religious exemption in his legislation.

At the time he had told the B.A.R. that he expected to introduce a revised bill this year that he hoped evangelical leaders could support. Low, however, did not introduce reworked legislation by the February deadline to do so.

He could still have brought forward the bill through what is known as the gut and amend process, where the language of an existing bill is swapped out with that of different legislation. But at the March 15 summit for LGBTQ leaders from around the state co-hosted by the Legislative LGBT Caucus and statewide LGBT advocacy group Equality California, Low told the B.A.R. that he now plans to file a nonbinding resolution this year with the hope of bringing forward legislation next year.

"I am working on a resolution that both LGBT people and religious leaders can sign on to about the harm conversion therapy does to people," said Low.

Gay state Senator Scott Wiener (D-San Francisco) used such a strategy to advance his legislation that would ban medically unnecessary surgeries performed on intersex infants. He had the Legislature pass a resolution last year opposing such procedures as a way to educate lawmakers and the public about the issue.

This year, he has authored Senate Bill 201, the Intersex Bodily Autonomy bill, to require doctors to postpone the unneeded procedures until patients are old enough to give their informed consent. The legislation is facing strong opposition, as the B.A.R. reported online Monday that the powerful California Medical Association is officially opposed to it.

As for Low, he told the B.A.R. he is unsure of the timing for when he would introduce his resolution about the harm conversion therapy causes LGBT adults.

EQCA set to release school report card
In April EQCA expects to finally release its long awaited, first-of-its-kind report card on how the state's school districts are teaching LGBT history and protecting LGBT pupils. Two years ago the B.A.R. first reported on EQCA's plan to grade all of California's 343 unified school districts on their LGBT policies.

It was revealed at the daylong meeting that the three districts with the highest scores are San Francisco Unified, Ceres Unified in Stanislaus County, and Oceanside Unified in San Diego County.

Officially known as the Safe and Supportive Schools Index, it is modeled after the Municipal Equality Index created by the Human Rights Campaign, the national LGBT rights group, that annually scores cities across the country on how they are protecting their LGBT citizens.

"There are significant laws on the books designed to improve the lives of LGBTQ youth as it relates to schools. What we don't know is if schools are being compliant and enforcing those laws, so we decided to figure that out," said EQCA Institute program director Robbie Rodriquez last week.

Reviewing the responses and tabulating the individual scores for the districts, as well as building an online database the public will be able to access, has also taken longer than EQCA had initially expected.

Of the 343 districts, 130 responded by the extended deadline to do so last November. They are evenly distributed across the state, according to EQCA.

It was a marked improvement from the 30 school districts that had responded by the first deadline EQCA had given them. Achieving a 38 percent response rate, said Rodriquez, "is pretty impressive for us," considering it is the first time the agency has sought the information.