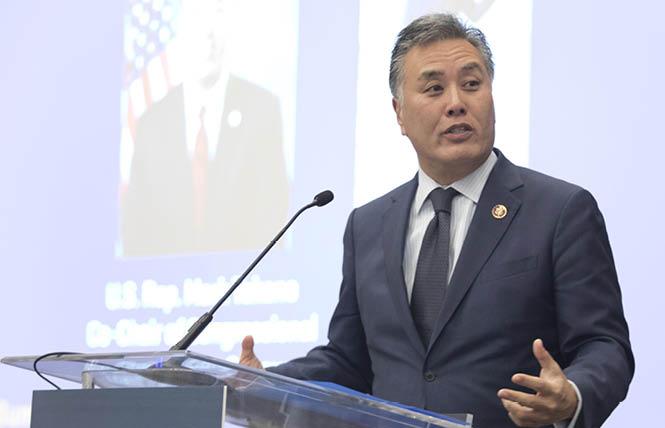 Congressman Mark Takano delivers one of the keynote speeches at the first gathering of LGBT elected officials in California that was held by the California Legislative LGBT Caucus and Equality California. Photo: Tia Gemmell

At a historic summit for LGBT officials in California, gay Democratic Congressman Mark Takano of Riverside highlighted the introduction of a sweeping federal LGBT rights bill and the increase of out public officials in more suburban and rural jurisdictions.

Federal lawmakers introduced H.R. 5, the Equality Act, last Wednesday with 239 co-sponsors in the House. It would provide clear, comprehensive non-discrimination protections in employment, housing, and other areas for LGBTQ people under existing civil rights laws.

While it is expected to pass out of the Democratic-led House, its chances are far less certain in the Republican-controlled Senate, where it is known as Senate Bill 788. As of Friday the Senate version had just 43 Democratic sponsors, two independent sponsors, and one Republican sponsor, Susan Collins of Maine.

It is highly unlikely that Republican Senate Majority Leader Mitch McConnell of Kentucky will allow it to come up for a vote. Nor has President Donald Trump given any indication that he would sign it into law should the legislation make it to his desk.

Nonetheless, Takano told the Bay Area Reporter during a brief interview at the gathering in Sacramento that there is still a possibility of seeing the legislation become law. The key, he said, is public pressure on federal lawmakers and the president to enact it.

"I wouldn't count on Mitch McConnell to bring it to the floor of the Senate willingly. What we need for that to happen is that the American people will be buoyed by our actions in the House so much so that the heat becomes so intense ... the heat of public pressure becomes so intense that is what will bring the Equality Act to the floor of the Senate," Takano told the B.A.R.

To those questioning the decision to introduce legislation that isn't assured of passage this year, Takano said the Equality Act will have political ramifications even if it doesn't become law. For one, it is a stark reminder of what a Democrat-led Senate and House could achieve with a Democrat in the White House come 2021.

"What we are doing is providing a contrast between what Republicans and Democrats stand for," said Takano, the first LGBT person elected to Congress from California.

And it also puts those candidates seeking the Democratic Party's nomination in next year's presidential race on notice that LGBT rights are a top priority for the party, noted Takano, and need to be at the heart of their campaign policy platforms.

Despite the political considerations surrounding the bill, Takano said it is high time that every LGBT American is protected from discrimination, no matter if they live on the coasts, in the South or the Midwest.

"Equality should not depend on your ZIP code," Takano told the more than 150 people during his remarks at the March 15 gathering in downtown Sacramento.

Inaugural gathering
Takano was one of the keynote speakers at the state's first LGBT Leadership Summit co-hosted by the California Legislative LGBT Caucus and statewide LGBT advocacy group Equality California. As the B.A.R. noted in February when first reporting on the daylong meeting, it served to bring local LGBT leaders together to network, learn about various policy issues, and discuss legislation at both the state and federal level.

It also served as a way for those interested in seeking higher office, particularly state Senate or Assembly seats, to meet with leaders of EQCA and members of the caucus face-to-face. During one panel where the caucus members advised those interested in running for higher office, lesbian state Assemblywoman Susan Talamantes Eggman (D-Stockton) announced she had changed her mind about running for state Senate in 2020 and was entering the race.

(As the B.A.R. noted in an online story Friday about her decision, as of January she had said she would seek re-election to her Assembly seat next year.)

The LGBT caucus in Sacramento currently stands at seven members, two of whom will be departing next year. Lawmakers and community leaders are looking to ensure the caucus either maintains or grows its ranks in next year's election.

"One of the goals our board has set is to build and enhance our role as a talent engine for the LGBTQ movement," said EQCA Executive Director Rick Zbur. "We have set a specific goal of recruiting and training the new generation of LGBTQ community leaders."

Addressing those in the audience, Zbur said, "You are the leaders of our community. You are providing our community with the representation and leadership we need and our community and state needs."

Even with the gains the LGBT community has made in the Golden State in recent decades, lesbian Senate President Pro Tempore Toni Atkins (D-San Diego) said there is still much more that needs to be done at the state level to advance the rights of LGBT people. And to achieve that requires having LGBT people at the table in Sacramento, she said.

"You are making an incredible difference in our community. We are making real progress, not just in representation but legislation," she said. "We still have a lot to do in that arena. We still have basic work that needs to be done."

First elected to Congress in 2012, Takano noted it took another six years before there was a second out person among California's congressional delegation. Bisexual Congresswoman Katie Hill (D-Palmdale) became the first out woman from the state by defeating an incumbent GOP representative last November.

"We are both from iconic gay hubs for our state. I am from Riverside County and she is from Simi Valley," joked Takano, adding that Hill "is proving to be a force to be reckoned with" on Capitol Hill.

Their success outside of major metro areas with LGBT neighborhoods, he pointed out, mirrors that of many of the other out congressional members. Nearly all of the current class of out federal lawmakers hails from districts that are in exurban areas of their states.

"It just goes to show we have really broken a lot of barriers not just in California but nationwide," said Takano. "We have seen the election of people from states not associated with being gay-friendly."

Nor is he any longer the only LGBT person of color serving in Congress due to the election of Sharice Davids, a lesbian and Native American, to a House seat in Kansas. Takano also pointed to the election last year of gay former state senator Ricardo Lara as California's first statewide LGBT elected leader who also happens to be a person of color.

"As a gaysian member of Congress, I hope young members of our LGBTQ community see people like them in the halls of Congress and here in Sacramento and think they too can serve out and proud," he said.

One up and coming out politician is Dan Tavares Arriola, a gay man just elected to the Tracy City Council last November. His city's mayor position will be up in 2020 and he didn't rule out running when asked about doing so by the B.A.R.

"I am going to keep my options open," he said.

Also in attendance at the summit was Shanta "Shay" Franco-Clausen, who lost her bid last year to become the first lesbian on the San Jose City Council and is now serving on the Santa Clara Valley Open Space Authority board. She said she may again seek higher office one day and inquired of the state lawmakers, "How do we get better and get your support?"

She noted it wasn't until she had raised a considerable amount of money for her council bid that people began to take her candidacy seriously.

"If we have these limitations it really stunts the growth of our LGBT community," she said.

When she noted she lives in the district of gay Assemblyman Evan Low (D-Campbell), he quickly noted, "I am done in eight years" when term limits will bar him from running again for his seat.

To which Franco-Clausen replied, "I am patient."

In more fully answering her question, Low said the summit was organized in order for those in elective office at the state level to meet with those interested in serving alongside them or succeeding them at some point because "mentorship" is key. And when the caucus members focused on who could run for the Legislature, he said they realized there wasn't a readily accessible list of possible candidates.

"We were looking around," said Low, "and saying, 'Where are the people to run for these seats?'"

Gay state Senator Scott Wiener (D-San Francisco) told the B.A.R. he "was blown away" by the turnout for the summit, which EQCA and the caucus hope to annually convene going forward.

"When we first started talking about doing this, we weren't sure how many people would come to Sacramento. Early on the RSVPs were a little slow to arrive, and at the last minute it exploded," he said. "Looking around the room at how many local LGBT elected officials, many I have met over time, there are and seeing them all together is terrific, including some I didn't realize were LGBT."