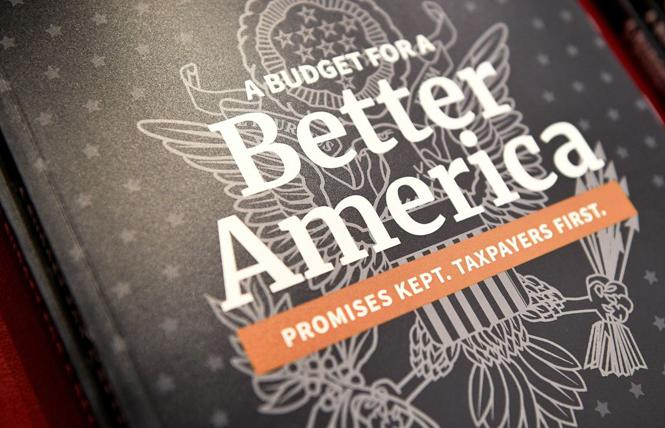 President Donald Trump proposed a budget for fiscal year 2020 Monday that includes new funding for an initiative to end HIV in the United States but also contains cuts that could compromise that goal, advocates said.

The $4.7 trillion proposal calls for $291 million for the administration's Ending the HIV Epidemic plan, introduced during Trump's February 5 State of the Union address, which aims to reduce new infections by 75 percent within five years and by 90 percent within 10 years.

Congress must approve the budget by the start of the fiscal year on October 1. Democrats are likely to balk at some of the provisions, including nearly $9 billion for a border wall and cuts to Medicare and many popular domestic programs.

"The Trump budget sends mixed messages that run counter to promises made to the American people," Ernest Hopkins, director of legislative affairs at the San Francisco AIDS Foundation, told the Bay Area Reporter. "As a document that signals the priorities of the administration, it declares war on seniors, youth, low-income people, the medically frail, and disabled individuals by stripping them of health care access and other essential services. Our communities will not be fooled by this wrong-headed misunderstanding of what drives new HIV infections."

The $291 million figure, which represents the first phase of the initiative, includes $140 million for the Centers for Disease Control and Prevention to promote HIV testing, linkage to care, and PrEP, according to the budget document.

The Ryan White HIV/AIDS Program within the Health Resources and Services Administration would get $70 million in new funding for direct health care and support services. HRSA would receive another $50 million for "expanded PrEP services, outreach, and care coordination in community health centers," the document stated. In addition, the Indian Health Service is allocated $25 million for HIV and hepatitis C screening, prevention, and treatment, and the National Institutes of Heath's Centers for AIDS Research would receive an additional $6 million.

The budget document also mentions $54 million for the Minority AIDS Initiative and $116 million for the Substance Abuse and Mental Health Services Administration's Minority AIDS program, outside the $291 million figure. SAMHSA will receive additional funding to address the opioid epidemic, which contributes to HIV and hepatitis C transmission, and the CDC will get $58 million more for its efforts to combat infectious diseases linked to opioid use.

"These goals will not be accomplished in one year and funding this initiative will require a long-term investment, but it is an investment we must make," Michael Ruppal, executive director of the AIDS Institute, said in a press release. "Not only will it save people's lives, but it will save money in the long run with saved medical costs. We urge Congress to approve this vital funding and set the nation down the path toward ending new HIV infections in the United States."

Not all good news
However, the budget proposal also contains numerous cuts that will hinder efforts to prevent new HIV infections and improve the health of people living with HIV, advocates said.

Last week at the Conference on Retroviruses and Opportunistic Infections in Seattle, National Institutes of Allergy and Infectious Diseases director Dr. Anthony Fauci assured attendees that the plan, which has been in development since long before the current administration, would not involve shuffling money away from existing domestic and international AIDS efforts.

But the document released Monday includes both domestic and global cuts. These include a $63 million reduction for the Housing Opportunities for People with AIDS program and cuts to the President's Emergency Plan for AIDS Relief, which covers a majority of people receiving antiretroviral therapy worldwide.

The National Institutes of Health would see around a 12 percent reduction, with the National Cancer Institute and NIAID, which funds most HIV research, taking the biggest hits (down $897 million and $769 million, respectively). Trump also sought to cut NIH funding in the last two annual budgets, but the agency enjoys wide bipartisan support and Congress instead increased its funding.

The budget proposes to slash federal spending on Medicare by $845 billion, although some of that would come from efforts to hold down prescription drug costs. It also aims to overhaul Medicaid, giving states more flexibility to administer their programs and instituting an expanded work requirement. Medicare is the largest source of federal funds for HIV care and treatment, followed by Medicaid and the Ryan White program, according to the Kaiser Family Foundation.

"The cruel and shortsighted cuts in President Trump's budget request are a road map to a sicker, weaker America," House Speaker Nancy Pelosi (D-San Francisco) said in a statement. "After adding $2 trillion to the deficit with the GOP tax scam for the rich, President Trump wants to ransack as much as $2 trillion from Medicare and Medicaid."

Advocates emphasized that these cuts will harm people with HIV and interfere with efforts to end the epidemic.

"The $291 million in new resources for an End the HIV Epidemic plan is little more than smoke and mirrors when paired with $63 million in cuts to HOPWA and proposed disruptions to Medicaid and Medicare that could strip health care access from hundreds of thousands of individuals living with HIV and receiving PrEP through Medicaid expansion," Hopkins told the B.A.R.

Updated, 3/14/19: This article was updated to state the correct total proposed budget of $4.7 trillion and the correct figure of nearly $9 billion for border wall spending.

Biden says he can beat HIV by 2025 — but activists are skeptical
Sign up!