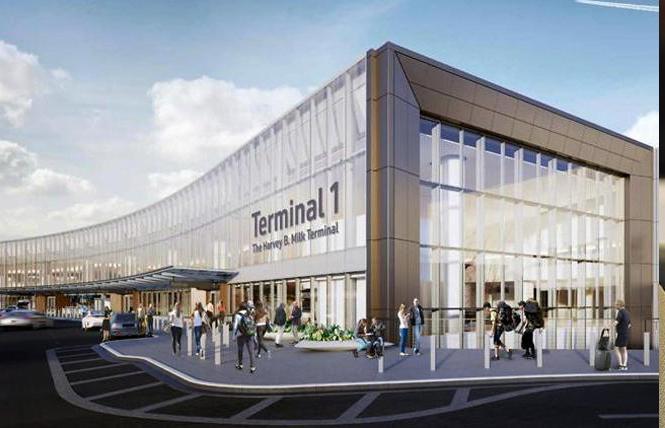 The old version of plans for the Harvey Milk Terminal shows the small letters design for the late gay icon. Photo: Courtesy SFO

We were puzzled by the discovery a couple of months ago that Equality California, the statewide LGBT advocacy group, was planning to honor San Francisco International Airport at its Equality Awards gala in the city in May. After all, SFO has hardly been supportive of city officials' decision to name Terminal 1 after slain supervisor Harvey Milk. Airport officials have been dismissive of supervisors' directives and have tried to undermine the terminal project, which includes exterior signage, art reflective of Milk, and other displays featuring the history-making gay icon. That the airport's leadership would exhibit such disregard was shocking.
On Tuesday, EQCA made the right call to remove SFO from its awards gala.

For the last six years, we have reported on the unending saga to name the terminal for Milk, the state's first out elected official. Now that the naming plan has been approved by the Board of Supervisors and signed by the mayor, airport officials continue to be less than enthusiastic about the actual details of the plan, such as how large the letters should be that spell out "Harvey Milk Terminal." District 9 Supervisor Hillary Ronen had to resort to introducing legislation to mandate the size of the lettering and other signage to ensure they would be prominent. At a Monday hearing of the board's rules committee, which Ronen chairs, SFO director Ivar C. Satero did himself no favors as he sought to have the ordinance scrubbed in favor of an administrative solution. That did not please Ronen, who doubled down on her insistence that the terminal properly pay respect to Milk.

"I am frustrated. It has been a fight every step of the way, and that has not changed in any point of the process," Ronen told the Bay Area Reporter following the hearing.

Even more disturbing were comments from Milk's gay nephew, Stuart Milk, that airport officials have not communicated directly with him, his family, or the Harvey Milk Foundation during this entire process. Stuart Milk said that he gave one of his cards to an airport official last spring at the signing ceremony to designate Terminal 1 in honor of his uncle. He's still waiting to be contacted.

Ronen and gay former supervisor David Campos, who spearheaded the Milk terminal project when he served on the board, both apologized to Stuart Milk.

Stuart Milk, who sits on EQCA's board, quickly informed Executive Director Rick Zbur this week about his concerns. In his statement, Zbur acknowledged that recognizing SFO at this year's Equality Awards is "premature."

"We would prefer to wait until the airport has submitted plans for appropriately bold signage and the public has had the opportunity to see and experience the Harvey Milk terminal and the amazing public art and exhibitions inside," he added.

At the hearing, Satero got bogged down talking about "wayfinding" — easing navigation paths for airport users. SFO has only four terminals; we think travelers will be able to find the right one. He said that there are existing federal requirements for "T1," T2", etc. signage to indicate the designated terminal, and that "Harvey Milk" would only appear on the entrance. Yet he mentioned that the airport is changing 150 signs so hotel guests are directed to shuttle buses bound for the new Grand Hyatt. Ronen told us afterward, "As Ivar said at the end of the hearing, they are replacing all this signage leading people to a hotel. Why can't they offer that same attention and respect to Harvey Milk?"

Community members can be assured that Milk will be appropriately recognized now that Ronen has amended her ordinance. It calls for the exterior signage facing the airport's roadway entrance and the domestic parking garage to state "Harvey Milk Terminal" in capital letters at least four feet high, and smaller letters below for "Terminal 1" at about three-quarters the height. She also added a section that says wherever signage identifying Terminal 1 appears on the interior or exterior of the terminal or airport the words "Harvey Milk" appear in equal or greater height.

These airport shenanigans point to the importance of LGBTs serving on city commissions (the airport has none). Mayor London Breed must give serious consideration to naming an LGBT person the next time there is a vacancy on the panel. With regard to this project, the presence of an LGBT airport commissioner might have resulted in a smoother flight with less turbulence.