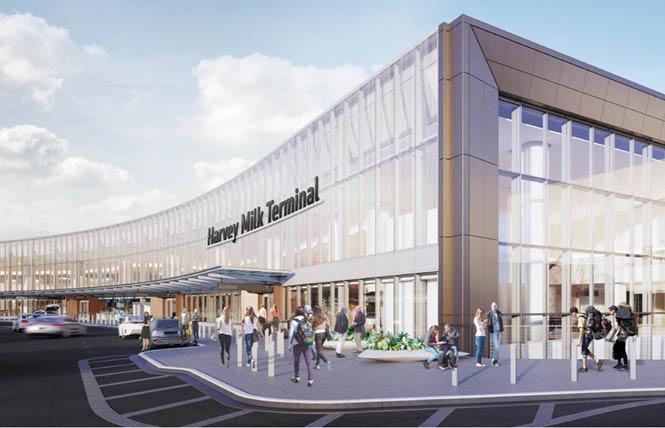 Revised drawings for the "Harvey Milk Terminal" exterior signage at San Francisco International Airport renewed community complaints for showing the gay icon's name would not be used at all of the facility's entrances. Photos: Courtesy SFO

Community leaders and the family of the late gay supervisor Harvey Milk blasted San Francisco International Airport officials for mishandling the naming of a terminal after the LGBT icon during a City Hall hearing Monday morning.

As the Bay Area Reporter has detailed in various stories over the last six years, airport officials fought the attempts to initially name the airport after Milk, the first openly gay person elected to public office in San Francisco, and then the compromise effort to designate one of its four terminals in honor of Milk. The mayoral-appointed airport commission went so far as adopting its own policy for how to name areas of the bayside facility in reaction to the Milk naming proposal.

Following years of delays in its formation, an advisory body in 2017 recommended that the under renovation Terminal 1 bear the name of Milk, who was killed along with then-mayor George Moscone inside City Hall the morning of November 27, 1978.

Last year, the supervisors and former Mayor Mark Farrell finalized the decision to rename Terminal 1 as the Harvey Milk Terminal. But when airport officials released images last fall of what the exterior signage would look like, it led to complaints that Terminal 1 was given more prominence than Milk's name.

It prompted District 9 Supervisor Hillary Ronen to introduce an ordinance that would force the signage to be flipped, with "Harvey Milk Terminal" in capital lettering in a larger font size and above the lettering for "Terminal 1." At the hearing before the supervisors' rules committee, which Ronen chairs, SFO director Ivar C. Satero sought to have the legislation scrapped in favor of coming to an administrative solution.

Yet Satero then presented mockups for the exterior signage that showed Milk's name would be prominently displayed over the first entrance to Terminal 1 that visitors would encounter but then be dropped entirely at the other entrances. He reiterated the airport's previous concerns about "wayfinding" and the need to make it easy for passengers to be able to navigate through SFO and easily find Terminal 1.

"We want to make sure folks don't circle and get confused where they are at," said Satero, adding that the airport believes the design "respected well the spirit of what we are trying to do with the naming of Terminal 1 after Harvey Milk."

The airport's latest proposal for the exterior signage elicited renewed complaints from LGBT community members that it was downplaying Milk's name. It led Ronen to amend her ordinance to require the airport to use Milk's name on all signs for Terminal 1 both inside and outside the facility.

"I am frustrated. It has been a fight every step of the way, and that has not changed in any point of the process," Ronen told the B.A.R. following the hearing. She added that the airport first approached her about dropping her ordinance Monday morning just prior to the hearing.

Gay former District 9 supervisor David Campos, who had initially proposed the Milk terminal naming idea and employed Ronen as his chief of staff, didn't mince words at the hearing about his frustration with airport officials. He offered his apologies to Stuart Milk, the gay nephew of Harvey Milk who flew into SFO to attend the hearing, and his family for how the airport has handled the naming issue.

"One of the hardest things for me to see with this whole process is how difficult it has been to move it forward," said Campos. "My apologies to Harvey Milk's family. What they have seen from the moment I proposed naming of the airport for Harvey up to this point is a real fight to keep Harvey Milk's name out of the airport."

He urged Ronen not to drop her ordinance as he argued that the airport could not be trusted to properly honor Milk and implement the naming of the terminal without the legislative mandate.

"If you leave it to them, you will need a magnifying glass to see it," Campos said of the Milk terminal signage the airport would install.

Stuart Milk disclosed at the hearing that, over the six years the naming honor for his uncle has been under discussion, no one from the airport has reached out directly to him, his family, or the foundation they created in Milk's name. He told the B.A.R. that even after introducing himself and giving his business card to an SFO official last spring at the signing ceremony to designate Terminal 1 in honor of his uncle, no one reached out to him.

"To be honest, it is not hard to get in contact with me or the Milk foundation," said Stuart Milk.

The lack of communication, he said during the hearing, called to mind how opponents of LGBT rights will "dehumanize" LGBT people as not having a family.

"They want to forget they have a history and forget they have people trying to take care of that legacy and do justice to all that my uncle stood for," said Stuart Milk. "I am saddened that there has not only been opposition from the airport, I am also saddened there has been no reaching out to the Harvey Milk Foundation either."

As a frequent traveler Stuart Milk said he finds himself in countless airports around the world that handle their signage in counterintuitive ways, such as having a Terminal Z come before a Terminal A, and is still able to navigate through the facilities.

"The whole issue of wayfinding I find to be disingenuous," he said.
Instead, he said the airport is missing out on an opportunity to create a tourist destination in its own right by installing Harvey Milk Terminal signs that people, both straight and LGBT alike, would seek out and want to have their photo taken by.

"I am just amazed the airport doesn't see that," he said, noting how much money is spent by visitor bureaus the world over to attract LGBT tourists. "It is just really beyond explanation as how we don't see that."

Following the testimony by Milk and Campos, and several LGBT community leaders who also spoke in support of Ronen's ordinance, Satero said the airport shares their desire to honor Milk's legacy and history. But he again stressed the need for SFO to be careful about the types of signage it installs.

"We certainly want to pay respect to that at the airport," he said, adding though, "as an operator of an airport, we want to do it in a thoughtful way."

He went on to detail how the airport will be updating upward of 150 signs to help people find the shuttles to board for hotels near the airport and the ones for the Grand Hyatt hotel that is being built at SFO and soon to open.

"People, I am sure, will still get on the wrong hotel shuttles, will get lost and be very unhappy with that," said Satero.

Stuart Milk told the B.A.R. that he was "really disappointed and shocked" by Satero's comments after hearing from the public.

"He basically doubled down on his, I think, disingenuous talking points of wayfinding," he said. "At the end of the day either he doesn't get it or they really oppose honoring the memory and legacy of my uncle or both. I hope it is the first, that they still don't get it, which is still not good but is better than the latter."

Ronen also told the B.A.R. that she found Satero's remarks about the hotel signage telling.

"As Ivar said at the end of the hearing, they are replacing all this signage leading people to a hotel," she said. "Why can't they offer that same attention and respect to Harvey Milk?"

Ronen and District 1 Supervisor Gordon Mar, a member of the rules committee, both voted in support of her ordinance, which will be taken up by the full Board of Supervisors next Tuesday, March 19. The board will need to vote on it a second time at its March 26 meeting before sending it to Mayor London Breed for her signature.

Breed late last year told the B.A.R. there was a need for both "appropriate acknowledgement" and information about Milk at the terminal, "and not just his name only but information to that effect, both when you come to the airport and as well as when you go on the website for the airport."

The permanent exhibit, signage, and a lighting art piece in the southern portion of the arrivals level honoring Milk are to be unveiled in March 2020, according to the airport. Asked if he was confident the airport's installation would properly honor his uncle, or if he also had concerns about those plans, Stuart Milk told the B.A.R., "How could I have confidence when they have not connected with me, the foundation, or anyone I know?"

Asked about Milk's revelation no one from the airport had contacted his family since 2013, SFO spokesman Doug Yakel did not refute the statement when contacted Monday by the B.A.R.

"Our focus has been on working with the sponsors of the legislation, but, through our crowdsourcing campaign, we invited the community at large to play a role in determining the content to be featured which honors the life and legacy of Harvey Milk," wrote Yakel in an emailed response.