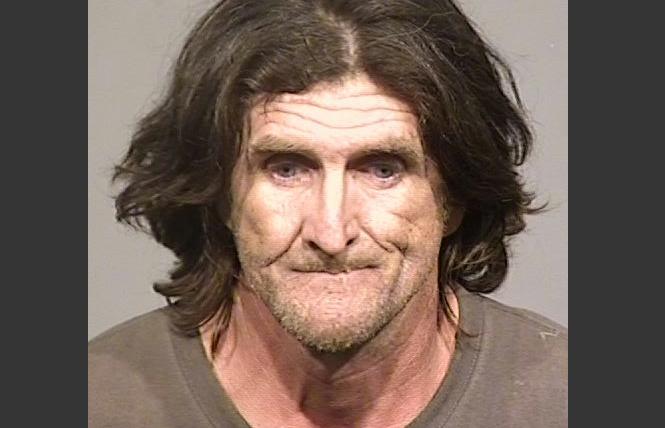 A Sonoma County Superior Court jury Thursday found a Guerneville man guilty of a felony hate crime for threatening to kill LGBTs in May 2018.

Vincent Joseph O'Sullivan, 56, had pleaded not guilty to the criminal threat charges after threatening to "bomb the gay people in Guerneville" at a local Safeway store.

O'Sullivan was convicted last year of stealing a rainbow flag from the Guerneville Plaza flagpole with a conspirator, Michael Tomas Campos, 35, who was also found guilty of petty theft. The flag had been stolen more than half a dozen times. When arrested for that theft, O'Sullivan described the flying of the flag as "disgraceful and offensive," claiming it had no place on the pole, which was dedicated to veterans, according to an assistant district attorney's statement.

The original hate crime charges against O'Sullivan were dismissed by Superior Court Judge Andria K. Richey at his May 2018 preliminary hearing, after the judge cited a lack of evidence. Prosecutors in the case appealed the ruling and the hate crime charges were eventually reinstated in June 2018.

O'Sullivan was represented by attorney Martin Woods for the hate crime trial and the prosecutor was Assistant District Attorney Brian Morimune.

After the verdict was read by Sonoma County Superior Court Judge Peter Ottenweller Thursday, March 7, O'Sullivan was remanded. His bail is set at $25,000 and his sentencing will be April 4. Woods did not respond to a request for comment from the Bay Area Reporter.

Morimune did not want to comment directly to the B.A.R., but lesbian District Attorney Jill Ravitch said in a news release, "In our society free speech is a valuable right. And yet, this is not an unfettered right. When speech crosses over into threats that are specific, immediate, and intended to be conveyed as threats, that can become a crime."

The two-day trial included testimony from members of a Flag Supporters Facebook group that had been replacing the purloined rainbow flags and the owner of Smart Pizza in Guerneville, who had surveillance footage of O'Sullivan stealing the flag. The jury also heard from Sonoma County sheriff's deputy Theodore Van Bebber, who testified in the flag stealing case, and Hank Myers, the victim of the Safeway incident.

Myers, a gay man, is an employee of a Starbucks located inside the Guerneville Safeway store off Highway 116. According to Robert Maddock, the former deputy district attorney prosecuting the case, Myers had suffered nightmares and feared for his life when O'Sullivan was threatening him and others at the Safeway. During that incident, O'Sullivan allegedly said, "I am going to kill all the motherfucking gays," and "I am going to blow you up, you motherfucking faggot."

A member of the Flag Supporters group, Dale Godfrey, a straight ally who attended the trial, said Myers' testimony was the strongest from the prosecutor.

"He was emotional from time to time," Godfrey told the B.A.R. before the verdict was announced. "He was very direct and showed emotion."

"I am Native-American, the same thing could have happened to me. Someone could have said the same nasty things. It's just not right," he said.

Beth Streets, another straight ally and member of the flag group, also testified at the trial. Her testimony surrounded the multiple times she had to replace the flags and how the thefts spoke to O'Sullivan's hate toward the LGBT community. She said the guilty verdict will "mean a lot to the entire community" and that it "sends the message, loud and clear, that hate is not tolerated in the county."

During closing arguments, according to Godfrey and Streets, the defense tried to create doubt. Woods said that surveillance footage from Safeway, which did not have audio, showed that Myers did not experience anxiety or fear due to O'Sullivan's behavior. According to Streets, he also said that his client was the "number one public enemy in Guerneville and that he had a bull's eye on his back."

Prosecutors dismissed Woods' allegations that Myers was unaffected by O'Sullivan's words, saying that each person reacts differently in situations and that he was just trying to do his job as the lone barista with customers in line.

For Streets, who has been actively attending all of O'Sullivan's court appearances, starting with the rainbow flag case, she feels the verdict will be beneficial to other hate crime victims.

"It allows other people, victims of hate crimes, to feel more comfortable and safe to come forward," Streets said.