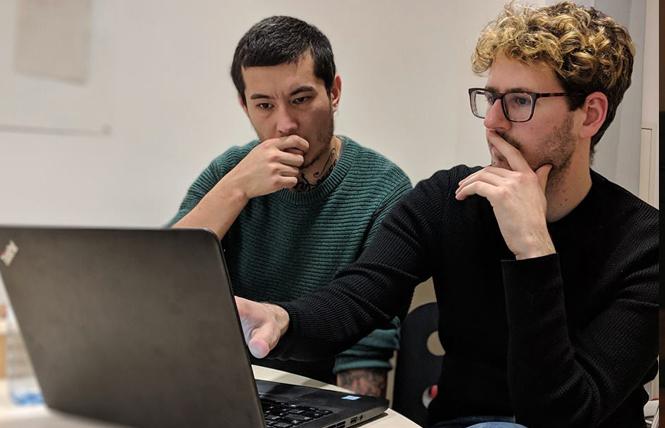 Ali Feruz, left, and Andreas Schmiedecker, two of the co-founders of Unit, a journalist network in Eastern Europe and Central Asia, work in the project's Berlin office. Photo: Courtesy of Ali Feruz/Facebook

A formerly detained journalist, Ali Feruz, is seizing upon his notoriety to champion journalism and journalists by creating a network and a platform for reporters to tell stories that normally wouldn't make headlines.

On the one-year anniversary last month of his arrival in Germany after being deported from Russia, Feruz launched Unit, a network and platform for journalists.

"When I was living in Russia, in Moscow, I hadn't any plans to emigrate from Russia," Feruz, a 32-year-old pansexual man, told the Bay Area Reporter in a Skype interview. He had been working in Moscow as a reporter for Novaya Gazeta.

Novaya Gazeta is the independent Russian newspaper that broke the Chechnya LGBT purge story in 2017.

"I was like, working. It was dangerous, and I was afraid, but I really loved my job," he said.

Russian immigration authorities detained Feruz for six months in 2017 for living and working in Russia illegally before being deported to Germany in February 2018.

Born Hudoberdi Nurmatov in the former Soviet Union, Feruz faced being deported to Uzbekistan, where he became a legal citizen when he was 17 years old.

In 2008, he fled the Central Asian country after being detained and tortured by its security services, reported Radio Free Europe.

If he had been deported to Uzbekistan, where homosexuality is illegal, he faced at minimum three years in jail or possibly being killed for being queer.

The threat caused an international outcry by global LGBT and human rights advocates that made headlines around the world. They asked the European Court of Human Rights to examine his case.

A Moscow district court overseeing his case ruled in 2017 that Feruz failed to prove he faced danger if returned to Uzbekistan but allowed deportation to an alternative country.

At the same time Feruz arrived in Germany, a wave of LGBT Uzbeks fled from violence and threats of death, seeking asylum in other countries, reported Pink News.

Last spring, Reuters reported that Uzbek representatives told the United Nations that it would not budge on LGBT rights when they presented the country's third human rights report to the U.N. Human Rights Council.

Building a journalist network
Feruz is currently working at a cafe as a cook, but he hasn't given up his love of reporting on challenging issues in dangerous situations. Thus, Unit was born.

"They are trying to do something and to write to change the society," said Feruz about his fellow journalists and the dangers they face. "They are heroes. They are fighting. They are like, trying to change something. It's giving us so [much to] power our work and to continue."

"Journalism ... is a very important social institute in every society. It's not only in Europe or the U.S., it's important everywhere because journalists [are] writing about everything, very sensitive topics," Feruz added.

Schmiedecker, who is a freelancer with the Goethe-Institutes, is serving as the project coordinator. Gafarov, who is also Feruz's boyfriend, is the communications manager.

Unit is a project of Network for Reporting on Eastern Europe, a transnational media organization strengthening journalism and media through education, research, and networking, according to Unit's February 13 news release.

The main goal of the all-volunteer project based in Berlin is to bring journalists together to provide support, education, and a platform to tell stories from Eastern Europe and Central Asia, Feruz and Schmiedecker said.

"Media is one of the key aspects that define lives and the way people view each other," said Schmiedecker.

Many of the countries they are currently working in are connected to Feruz's personal history, but more importantly, countries where "people are invisible or don't have the right to speak," said Schmiedecker.

If they have spoken out publicly, they have become targets for attacks.

Protecting journalists they work with, starting in Eastern Europe and Central Asia, while still reporting on sensitive issues, is one of the reasons why they can't divulge some of the project's funding sources. It would put the people they are working with at risk due to the laws in the countries they are working in where it's dangerous to be a journalist.

The project's goal is to work with journalists to publish stories that either can't be reported due to the current media climate in the country or that are simply being overlooked by editors and journalists in the media cycle.

Forthcoming stories include one about lesbians in the Chechen anti-LGBT purge and another about controversial artist Marifat Davlatova from Tajikistan who has been highly criticized for her works depicting naked women.

"It's very important to us that people are based in the countries that we are talking about, or at least have strong connection there or come from there," said Schmiedecker.

The project is currently working with a core of 10 journalists representing 10 different countries to write stories about the LGBT and women's communities, human rights, and other marginalized communities.

These journalists are currently working on a pro bono basis, but Unit plans to compensate reporters for their work in the future.

The project is currently seeking more funding, donations, and membership to support the project and to pay journalists while keeping access to the articles free for readers.

Currently, there are more than 30 associated people volunteering with Unit developing artwork, photography, video, technical skills, and providing other support.

Unit currently has 27 members working to develop stories and the project, according to its website.

Their goal is to "find ways to have more visibility in more traditional media," said Schmiedecker, to sensitize journalists and media outlets to encourage and enable them to tell stories about marginalized communities, such as the LGBT community.

The men believe that by connecting with journalists who want to tell stories through Unit, supported by Unit, and through their own communities and media outlets that they can put a face on these invisible communities to show that they are their "neighbors," Feruz said.

Ultimately, the goal is to help people "live together" comfortably and as "good hearted as possible," added Schmiedecker.

To learn more or to join Unit, visit https://steadyhq.com/en/unit.