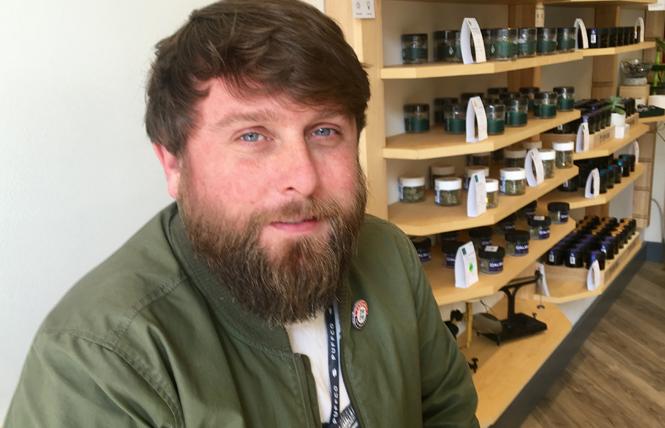 It took eight years of working its way through the government bureaucracy but the Vapor Room, one of San Francisco's quintessential cannabis dispensaries, is open again.

Previously a funky hangout in the Lower Haight from 2004-2012, the Vapor Room has reopened at 79 Ninth Street. While only a fraction of the size of its former storefront, the new space still has a smoking lounge and is staffed with people who have longtime cannabis industry experience.

After closing during the federal crackdown nearly a decade ago, owner Martin Olive promised he'd be back, and he is, hiring Carson Higby-Flowers as general manager.

When we stopped by to visit the new space, located in a former coffee shop in a still-struggling block of Ninth Street, between Mission and Market, Higby-Flowers (yes, his real name) gave us the lowdown.

A longtime cannabis activist who was previously at the Marijuana Policy Project, Higby-Flowers, 36, has been working with Olive for the past 18 months to get the new space ready to open.

"The Vapor Room has been a central gathering place for patients from the days when it was not safe to do so," he said.

While the smoking lounge only accommodates a few patients on its sunny window benches, Higby-Flowers, a straight ally, said the dispensary does offer customers the latest in technology for indoor consumption.

In addition to a Storz & Bickel vaporizer, the Vapor Room staff will be happy to loan customers a Puffco Peak, a state of the art vaporizer that is used with cannabis concentrates, for use in the lounge. But most people actually just smoke a joint, whether they roll their own or buy a pre-roll.

"It's the whole idea of being able to be comfortable smoking in public," Higby-Flowers said, pointing out that it is still illegal to smoke cannabis on the street.

The Vapor Room carries a highly curated menu of products selected by Higby-Flowers and Olive, featuring premium products at accessible prices, he said.

Recently, the store featured Cookies/Wedding Cake flowers at $23 for an eighth, "one of our better deals," Higby-Flowers said.

Since the grand opening earlier this year, the Vapor Room has seen an increasing number of customers, including "many people who I haven't seen in years," said Higby-Flowers. The company is active on social media and "we're getting a lot of love online," he added. Vapor Room will soon be announcing specials for 4/20, the annual cannabis holiday on April 20.

Another new cannabis dispensary and lounge, Moe Greens, opened in January less than a half mile away at 1276 Market Street, near Larkin. Owned and operated by the same people who run the popular Barbary Coast Dispensary, it has three separate areas for on-site consumption: one for vaping, one for concentrates, and one with five large booths to roll up, light up, and smoke.