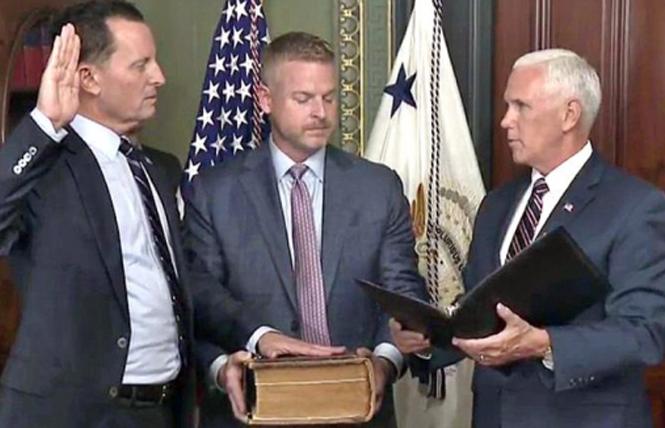 Gay U.S. Ambassador to Germany Richard Grenell, who is leading the effort, announced the campaign at a February 19 dinner with leaders from 11 European LGBT organizations in Berlin. Most were not identified.

Caught off guard, people immediately raised questions about key LGBT leaders and those of the targeted countries not being invited to the dinner. They also questioned political intentions, particularly regarding Iran.

Political analysts said the motive for the strategy may be linked to recent reports of Iran executing another alleged gay man. They noted Grenell's opposition to Iran and speculated he may be using LGBT human rights as a tool to get member states of the European Union and the United Nations on board with efforts against the country.

Trump seemed as surprised as LGBT activists. He appeared not to be aware of Grenell's strategy when a reporter asked him about it in the Oval Office February 20.

The New York Times reported that the Lithuanian Gay League tweeted (https://twitter.com/LGLLithuania/status/1098125730326724609?s=20) a photo of two of its leaders posing with Grenell, thanking him for his leadership the night of the dinner.

Stuart Milk, the gay nephew of slain San Francisco supervisor Harvey Milk and a global LGBT activist, confirmed to NBC News, which first reported the story, that he was at the dinner.

The other organizations in attendance haven't been identified yet, but Grenell told NBC News during a February 20 interview that the activists came from Bulgaria, Turkey, Ukraine, and other countries. There was an Iranian expatriate in attendance.

The Washington Blade reported it submitted a request for the names of the organizations that attended the dinner.

The strategy
The strategy would narrowly focus on decriminalizing homosexuality, targeting the 71 countries — a majority in the Middle East, Africa, and the Caribbean — that imprison individuals for consensual same-sex relationships. It would exclude all other LGBT issues, such as legalizing same-sex marriage.

Eight countries — Iran, Sudan, Saudi Arabia, and Yemen, as well as parts of Nigeria, Somalia, Syria, and Iraq — sentence people to death for being gay.

Grenell said that, due to the nature of the initiative, it would require "71 different strategies." The effort would include working with the U.N. the E.U., the Organization for Security and Cooperation in Europe, and countries that have decriminalized homosexuality.

He noted that some U.S. embassies and diplomatic posts in Europe, including the U.S. Mission to the E.U. and the State Department's Bureau of Democracy, Human Rights and Labor were already working on the effort.

Officials from OutRight Action International, the Human Rights Campaign, the Council for Global Equality, the Lesbian and Gay Federation of Germany, and the International Lesbian, Gay, Bisexual, Trans and Intersex Association-Europe were left in the dark about the initiative.

"What's surprising is that no one who works these issues within the U.S. government appears to be aware of this effort," Pressman, who is now a partner at the Boies Schiller Flexner law firm, said.

LGBT advocates and political experts fear that if the U.S. enlists European allies in the campaign, and it is more about Iran than LGBT rights, it could backfire, not only with allies but for LGBT people in Iran and the Middle East.

He told Metro Weekly that he wanted to know the details of the strategy and had "glaring questions about what the underlying purpose is."

Ty Cobb with the Human Rights Campaign suggested in a Washington Post op-ed that the Trump administration should lead by example before taking LGBT rights global.

"Based on this track record, there is no reason to believe this administration has the best interests of LGBTQ people at heart," Cobb wrote.

Perkins, a faith adviser to President Donald Trump, penned a column last year criticizing the U.S.'s striking down its own sodomy laws in 2003. He called the administration's latest move "cultural imperialism" in a blog post following the announcement, reported Pink News.

"Despite what some on the Left claim, we are not advocating for their return," wrote Perkins. "But that does not mean we should engage in 'cultural imperialism' by imposing policies that were imposed upon us by our court on other countries with different cultures, traditions, and values."

During a press event covering Trump's visit with Austrian Chancellor Sebastian Kurz in the Oval Office, a reporter questioned the president about the global decriminalization strategy.

"I don't know, uh, which report you're talking about. We have many reports," Trump responded.

"The authoritarian regime in Tehran represses the freedom of speech and assembly, it persecutes religious minorities, brutalizes women, executes gay people, and openly advocates the destruction of the State of Israel," said Pence, reported the Washington Blade. "The Ayatollah Khamenei himself has said, 'It is the mission of the Islamic Republic of Iran to erase Israel from the map.'"

During a State Department press briefing February 19, a reporter asked about the policy.

Department deputy spokesperson Robert Palladino told reporters, "This really is not a big policy departure. This is longstanding and it's bipartisan."

The State Department has yet to officially announce a global LGBT policy.

Not all LGBT activists were against the administration's sudden move.

Jerri Ann Henry, executive director of Log Cabin Republicans, told the Daily Beast she was "excited to see it."

"In no way, shape, form, or fashion can I guess as to what has gone through the administration's mind and what their motivation might be," said Henry. "But whatever the motivation, it is still a good thing and I still think we should be celebrating that and taking a stand on this issue."

Milk, who has been vocally critical of the Trump administration, told NBC News that having a conservative administration take the lead on "an issue that does make a difference in people's lives" was "unique."

"My criticism of the Trump administration has been steady," Milk told the network. "I have actually said that policies coming out of the White House and statements have been life-negating, not just for LGBT people but for many, many communities."

"But when any administration does something right, we're going to be there," he said.