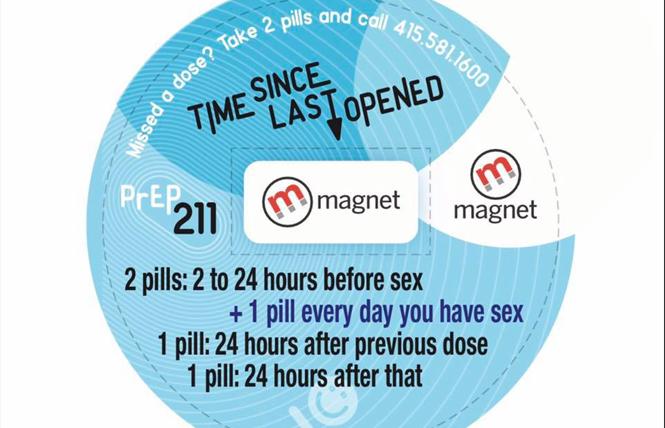 As health officials continue to urge more people at risk of becoming HIV-positive to take PrEP, the once-a-day pill that widely protects against being infected with the virus if taken as prescribed, San Francisco leaders are embracing a new dosing regimen that doesn't require continual usage of the drug.

Dubbed PrEP 2-1-1, it is designed for those who are only intermittently sexually active. It requires a person to take two pills of Truvada (tenofovir/emtricitabine) at least two hours — but preferably 24 hours — prior to engaging in sex. They then take another pill 24 hours later, and if done having sex, a final pill another 24 hours after that.

"We think it's going to bring a whole lot of people to PrEP who previously did not feel like PrEP was for them," said Dr. Chris Hall, vice president of medical affairs at the San Francisco AIDS Foundation, during a recent talk about the new dosing regimen.

Starting March 1 the nonprofit is launching a pilot study of PrEP 2-1-1 at Strut, its health center for men in the Castro. It is seen as a first step in providing data to the U.S. Food and Drug Administration in order to have the federal agency officially recommend PrEP 2-1-1.

"So far we've ever really emphasized the use of PrEP everyday to keep HIV away, but 2-1-1 dosing is a different way," said PrEP expert Dr. Robert Grant of the UCSF-Gladstone Center for AIDS Research at the recent forum hosted at Strut.

The moniker is meant to be a simple way to remind people how to take PrEP when they intend to have sex if they are not taking Truvada daily.

Several international studies following men who have sex with men have found the intermittent dosing regimen to be as effective as daily usage of PrEP. The Prevenir study in France, for instance, found zero HIV infections among the 506 men taking PrEP 2-1-1.

The International AIDS Society-USA has endorsed PrEP 2-1-1. Health officials in France, the United Kingdom, Canada, and Australia also recommend it.

"In France, almost half of the people starting PrEP elect this strategy. We've been behind in the USA and we need to catch up!" Pierre-Cédric Crouch, the director of nursing at SFAF's Magnet clinic housed at Strut, wrote on Facebook last fall after learning the FDA had approved its request to pilot PrEP 2-1-1 usage.

The FDA approved daily use of Truvada for HIV prevention in July 2012. Adoption was initially slow, but by late 2013 it began to rise steeply as gay men started promoting PrEP within their communities. Magnet has prescribed PrEP to 4,500 people since it began doing so and currently follows about 3,000 people taking Truvada.

Nationally, it has been difficult to estimate the total number of people using PrEP due to a lack of a coordinated tracking system. Health officials estimate between 100,000 to 200,000 people in the U.S. are on PrEP. Its usage, though, varies by region and is less prevalent among women and men of color. 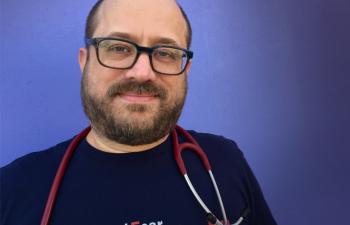 DPH advisory
In late November the San Francisco Department of Public Health advised HIV care providers that they should consider PrEP 2-1-1 "for men who have sex with men (MSM) who are ambivalent about daily pre-exposure prophylaxis for HIV (PrEP)." The advisory noted that the non-daily dosing strategy for PrEP is also referred to as "Intermittent," "Event-Driven," "Sex-Driven," and "On Demand."

The health department sent out a second advisory about PrEP 2-1-1 to providers February 12. It reiterated that its "first-line regimen" recommendation is for PrEP to be taken daily by most people.

But it also noted that Canadian and European studies have found PrEP 2-1-1 to be "an effective HIV prevention strategy for MSM." At the same time, the advisory stressed that the nondaily usage of PrEP has not been studied in cisgender women, cisgender men who have sex with women, transgender men and women, or people who inject drugs.

Dr. Stephanie Cohen, medical director of the health department's City Clinic, told the Bay Area Reporter that, since December, patients have been asking about PrEP 2-1-1 dosing. While the city prefers to see people take PrEP daily, she acknowledged not everyone is comfortable doing so.

"We really see 2-1-1, or sort of sex-event driven PrEP, is an option that might be more attractive to some people who aren't having sex on a super regular basis," she said. "Still, on occasion, they may be in a situation where they are exposed to HIV."

City Clinic began prescribing PrEP for daily usage in 2012 and has seen more than 1,000 people use it. Currently, it is following 600 people who are actively taking PrEP, and of those, only three are using the 2-1-1 dosing regimen, said Cohen.

"Really, we just started offering it as an option at the beginning of February for people who decline daily PrEP or if someone has previously been on PrEP but stopped," said Cohen. "We are encouraging daily PrEP as a first-line regimen at City Clinic because we have the most data on it." 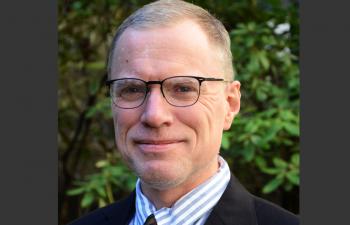 Some concerns
Plus, taking a pill daily is easier to do, she said, than having to ensure you have PrEP on hand prior to the occasional sexual encounter and take it as recommended.

"There are some nuances to the 2-1-1 regimen, like needing to take your first two pills at least two hours, and ideally 24 hours, before you have sex. So there is some planning involved when you hook up," noted Cohen. "That doesn't necessarily work for everyone."

PrEP 2-1-1 is so new in the U.S. that Dr. Grant Colfax, a gay man who formerly oversaw the city's HIV prevention efforts and took over as health director last week, told the B.A.R. he wasn't "completely familiar" with the dosing strategy when asked about the health department's most recent advisory about it. An early supporter of PrEP, Colfax did state that he continues to support its use.

Gay state Senator Scott Wiener (D-San Francisco) also told the B.A.R. he wasn't familiar with PrEP 2-1-1. He continues to take PrEP on a daily basis as the best option for himself but supports those who want to use it less frequently.

"The more options people have the better," said Wiener. "For me, I take it every day and never have to worry about it because, for me, having a changing regimen probably doesn't work as well."

Other gay men told the B.A.R. they are not fully convinced yet that PrEP 2-1-1 is the best way to protect oneself from HIV. Health advocate Luke Adams, who co-founded EMERGE: The Adams-Tynan Clinical Foundation, would like to see more focus put on finding new treatments for sexually transmitted diseases ahead of the day when current antibiotics no longer work rather than on "designer dosages of Truvada."

"As much as I've been a PrEP proponent, I'd like to see a LOT more evidence before I'm on that bandwagon," Adams told the B.A.R. "And if you're only occasionally fucking, the evidence is great. But, is that most people? And if our only demographic is people who can well plan-out their fucking, it's magnificent. But again ... what about those who pretty much fuck randomly?"

Lawyer Colin Gallagher, 50, also expressed misgivings about PrEP 2-1-1. He had started on PrEP in September 2004 and, up until the fall of 2017, had stuck to a regimen of one pill a day. He had gone on PrEP after divorcing his husband and returning to the dating pool.

"I thought the increased protection would be helpful. I stopped using condoms on PrEP," said Gallagher.

Late last year one of the men Gallagher had been seeing and having sex with on a regular basis learned from a new employer that it would not cover PrEP under its health insurance policy since it wasn't considered necessary medication. So Gallagher began sharing his PrEP prescription with his friend and only took it every other day in November and December of 2017.

By January his friend had found a way to obtain Truvada on his own, so Gallagher returned to a daily dosing regimen. A month after testing negative, he learned he had tested HIV positive February 2, 2018.

"I was shocked to found out I had seroconverted," said Gallagher, who provides pro-bono legal representation for LGBT asylum seekers while also working on a contract basis handling worker compensation claims.

Had he known about PrEP 2-1-1, Gallagher said he is unsure if it would have been a useful strategy for him to follow when he was sharing his Truvada prescription.

"I'm pretty skeptical of the 2-1-1 dosing regimen," Gallagher told the B.A.R. "I was taking Truvada every other day rather than daily for a brief period and still seroconverted. I'd hate to see anyone else wind up in the same situation."

At the Strut forum, Grant and Crouch both stressed that PrEP 2-1-1 is a safe and effective way to take Truvada if people follow the instructions for how to take it.

"Both daily dosing and 2-1-1 dosing are highly effective," said Grant, who was the principal investigator in the iPrEx Study that found Truvada to be effective at preventing the transmission of HIV. "In the trials of 2-1-1 dosing we did not see anyone become HIV-positive if they're actually taking 2-1-1."

Those who did test positive for HIV had stopped taking PrEP two to three months prior to becoming infected, noted Grant.

"So PrEP works if you take it and the best way to take it is the way that is easiest for you," he said. "Both daily dosing and 2-1-1 dosing are highly effective, and it comes down to which strategy to take it is going to work best for your lifestyle and your sexual practice."

Crouch noted that there has yet to be a documented case of someone getting infected with HIV who was doing the PrEP 2-1-1 dosing strategy.

"It will probably happen one of these days, but it hasn't failed yet," said Crouch. "Daily dosing works great. And we've seen a few cases where people have done everything right and they still got infected. But we know they're both very highly effective strategies. It has not not worked for someone yet. It will one day, but not today."