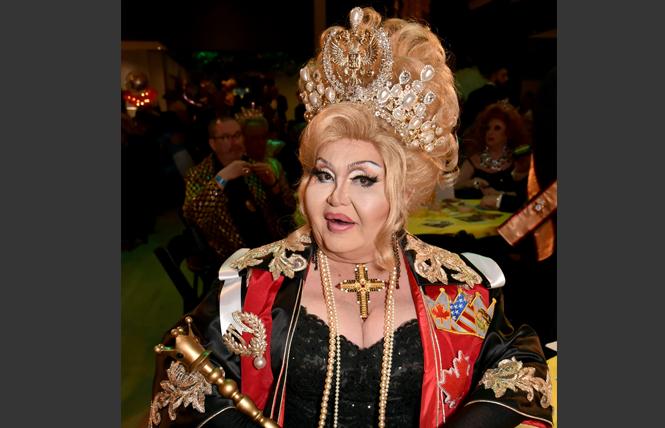 Nicole Murray Ramirez, Queen Mother I of the Americas, was in San Francisco last weekend for coronation festivities. Photo: Gooch

Two of the LGBTQ community's oldest organizations are joining forces to create a wall of honor at the Stonewall Inn in New York City for this year's historic 50th anniversary of the rebellion that gave rise to the modern gay rights movement.

The International Imperial Courts of the USA, Canada, and Mexico and the National LGBTQ Task Force are now accepting nominations for the joint project, according to a news release. They aim to select 50 people, in keeping with the 50th anniversary of the Stonewall riots.

The riots took place in June 1969, when patrons of the iconic bar rose up against homophobic and transphobic police harassment.

The bar, in the heart of Greenwich Village, fronts the country's first LGBT national monument overseen by the National Park Service.

"A community, indeed a civil rights movement, that does not know where it came from and on whose shoulders they stand does not really know where it is going," Nicole Murray Ramirez, Queen Mother I of the Americas for the Imperial Court organization, said in the release.

Ramirez said that the organizations would unveil the National LGBTQ Wall of Honor at the Stonewall Inn June 27 during the global Stonewall 50 and World Pride celebrations.
According to the release, the owners of the bar support the plan.

In the release, Ramirez thanked bi co-owner Kurt Kelly for his support.

"This is the ideal place to honor our movement's trailblazers," Ramirez stated.

Stonewall Inn co-owner Stacy Lentz, who is lesbian, told the Bay Area Reporter in an email that the bar is on board.

"Yes we are aware and excited," she wrote.

Rea Carey, executive director of the task force, said in the release that the project "will continue to inspire generations of people to be out, proud, and active in our pursuit of equality."

"As LGBTQ people, it is critical to know our movement's history and honor those who have brought us to this point in our progress toward freedom and liberation," she added.

The Imperial Court organization was formed in 1965. The task force, a national LGBTQ advocacy group, was established in 1973.

Ramirez and Carey said that the first 50 names will be selected by the Stonewall 50 Wall of Honor Governors made up of 18 community leaders including Wilson Cruz, Mandy Carter, Marsha Botzer, the Reverend Troy Perry, and Stuart Milk, the gay nephew of slain San Francisco supervisor Harvey Milk.

The criteria are that the person no longer be living, contributed to the advancement of the LGBTQ community in a substantive way, and that they were LGBTQ themselves.

Nominations are being accepted at www.icsstonewall50.org. The deadline is March 25.