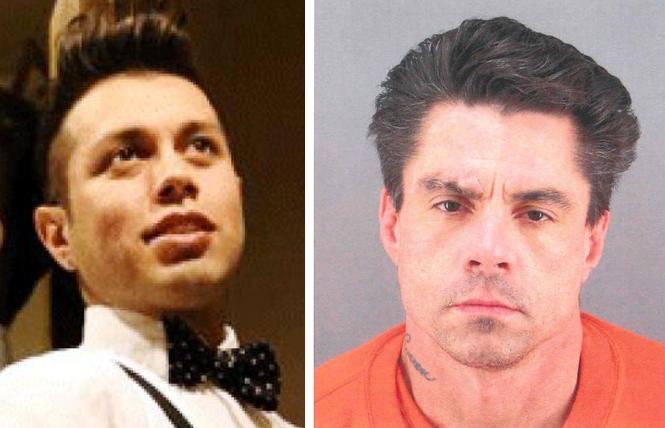 A defense attorney painted a different picture of gay stylist Steven "Eriq" Escalon, saying he was a partier, when she began to call witnesses in the murder trial of James Rickleffs, which entered its fourth week in San Francisco Superior Court.

Escalon, 28, was found dead in his Diamond Heights apartment June 12, 2012. He was gagged and bound at his feet and hands. Escalon allegedly met the defendant, James Rickleffs, 52, the night before Escalon's death at a Castro bar, 440 Castro.

Rickleffs, who has pleaded not guilty to the charges, has been in custody since September 2012. The case is being heard by Superior Court Judge Gerardo Sandoval.

The most significant witness to take the stand for the defense as of Tuesday, February 19, was Sergeant Joseph Lynch with SFPD, who was with the Crime Scene Investigation unit when he was working on the case. Lynch testified that an Iron Horse bottle was found in what Escalon's roommates identified as his purse. Iron Horse is a brand of retail poppers, often sold at sex shops or online. Also found in Escalon's purse was a small bag of five or six pills, one of which was identified as an amphetamine, as well as breath mints.

Items that were found in Escalon's room after his death, Lynch said, included another bottle of Iron Horse that was discovered spilled behind Escalon's bed. A Jungle Juice bottle, another brand of retail poppers, was found on Escalon's nightstand. Additionally, Lynch found a roll of duct tape in Escalon's closet. A bottle of cotton candy-flavored vodka, which Escalon's friend previously testified was purchased by him on June 11, 2012, was found in the hallway. The vodka bottle was apparently half full, as a crime scene photograph detailed, but the liquid was never identified, Lynch testified.

Two towels — one in the bathtub, the other on the bathroom floor — were also found at the crime scene. When Cervantes cross-examined Lynch, he said a possible reason for there not being fingerprints found on items is that someone may have wiped them off.

"It appears someone was trying to clean up after themselves," Lynch said on the stand.

Solis also showed the jury images of Escalon dressed only in a black pair of underwear and a blindfold covering his eyes, along with another picture of Escalon standing next to a man holding a whip. Warnke testified that a friend of Escalon's showed him the first photo in person on the computer during Warnke's investigation, but that he does not know who took either photo.

Solis also presented evidence that a mask was found in Escalon's room when investigators searched the scene. It was made by Sportsheet, a bondage company, though Warnke acknowledged he did not research the company name.

Sex toys in suitcase
Several sex toys were taken out of a black laptop bag and shown to the jury during the trial last week. Warnke said on the stand that the sex toys came from the silver suitcase that Rickleffs had when he was arrested in an unrelated incident a day after Escalon was found dead. Police considered Rickleffs a person of interest in the case after this arrest because the suitcase on his person contained items from Escalon's apartment including a laptop, Escalon's checkbook, and a bankcard of one of Escalon's roommates, according to police.

Solis also poked holes in Warnke's investigation of the case. A white Mac laptop was reported as missing from Escalon's room in Warnke's initial notes of the scene. That laptop was found in the suitcase that Rickleffs had the day of his arrest.

While on the stand, Warnke said, he "attempted to turn [the computer on] but it didn't turn on."

Solis asked, "Did you take it to the Apple store to see if they could turn it on?"

Defense opening
In her opening statements, Solis argued that Rickleffs stole the laptop because he did not want naked pictures of himself to be leaked. It's alleged that Escalon offered to pay Rickleffs $100 in order to take naked pictures of Rickleffs the night of June 11, when the two first met.

Solis also pointed out that Warnke was unsuccessful in retrieving surveillance footage from 440 Castro the night Rickleffs and Escalon were there and that Warnke's initial notes from the scene had no mention of smelling or seeing amyl nitrate.

Another witness Solis called was Dr. Judy Melinek, a forensic pathologist for Alameda County, formerly employed at the San Francisco Medical Examiner's office in 2012. On the stand she contradicted some aspects of Escalon's autopsy report done by Dr. Ellen Moffatt, San Francisco's chief medical examiner. Melinek reviewed pictures taken of Escalon at the time of his autopsy and at the scene of his death.

Moffatt testified earlier that there was bruising on Escalon's lips as they were purple in color. Melinek said she believes this to be post-mortem changes.

"These are post-mortem changes, not bruising on the lips. There are no lacerations on the lips to indicate trauma," Melinek told the jury.

Cervantes pointed out that Melinek was paid to testify by the Public Defender's office and that she testifies in about four to eight cases annually.

A paramedic with the San Francisco Fire Department, Kristina Nelson, also took the stand. She testified that rigor was apparent in Escalon's jaw, wrist, and ankles. She noted in her report at the time of death that an oropharyngeal airway, or a plastic adjunct used to keep the mouth open while performing CPR, was hard to insert into Escalon's mouth due to rigor. Rigor begins approximately six hours after death, according to Melinek.

The Castro Citibank branch manager, Bill Gardner, testified about specific transactions that Escalon allegedly made the night before his death. To help show that Escalon did offer to pay Rickleffs $100 to take naked pictures of him, Solis asked Gardner to verify that there was an ATM withdrawal of $100 at 4440 Castro on June 12 around 1:30 a.m. As well, she asked about a $10 debit card transaction for a taxicab at 1:38 a.m. the same morning. Gardner verified both transactions reading from a bank document.

The defense is expected to continue to call witnesses through the end of the week.