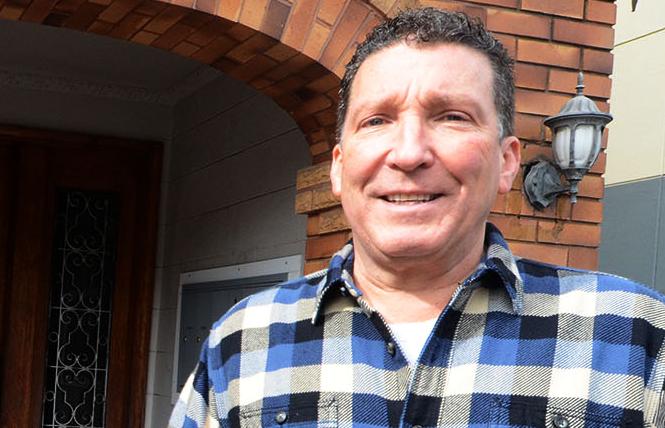 For almost three decades, Rosenfield, 60, has lived in the Castro district at 334 Noe Street, which is adjacent to the Castro's Fitness SF gym at 2301 Market Street. Jackovics, 80, purchased the Noe Street apartment building in 2014.

Rosenfield claims that Jackovics and the eight other people listed on the restraining order, including Jackovics' family members and two Fitness SF employees, filed the restraining order after Rosenfield called city agencies about violations occurring at the gym and his home. Jackovics was allegedly issued over 50 violations from several city agencies including the Department of Building Inspection, San Francisco Public Works, Department of Public Health, and the planning department for various maintenance and safety-related issues. Rosenfield provided documentation for some of the alleged violations to the Bay Area Reporter.

Jackovics' attorney, Scott Okamoto, told the B.A.R. that his client has no intention of evicting Rosenfield and that Rosenfield's allegations of harassment are untrue.

Earlier this month, Rosenfield filed his own restraining orders against Jackovics and Blake Smith, the manager of Fitness SF in the Castro, due to what he said was harassment.

At the first portion of the hearing involving the request for a restraining order against Jackovics, Rosenfield alleged that Jackovics has made repeated unauthorized visits to his home, attempted to illegally increase his rent, and has created nuisances at his home due to the negligence of repairs.

Jackovics has attempted to increase the rent on Rosenfield's rent-controlled apartment. That case is before the San Francisco Rent Board.

"They are making it impossible for me to honor the terms of the RO," Rosenfield said in court, referring to the restraining order. "I live in fear of falsely being accused of violating the RO."

The longtime Castro resident said the landlord and people from his team gave "excessive notices of entry," nearly 50, to his home. The judge said the high number of notices of entry made sense since Jackovics needed to address the nearly 50 violations.

After Rosenfield, who was acting as his own attorney, completed presenting his case, Dekreon quickly denied the restraining order saying, "You haven't given any evidence of credible threats of violence."

Dekreon then heard the case for Rosenfield's restraining order against gym manager Smith. During the hearing, Rosenfield described two incidents in which Smith allegedly came to Rosenfield's former place of work, Finn Town Tavern, and an arts theatre where he volunteers.

"I am trying to avoid these people to the best of my ability," Rosenfield said in court. "I've never been under restraint before."

In court, Smith said that he did not know where Rosenfield worked or volunteered and said the occurrences were coincidental.

An incident occurred September 2017 in which a Fitness SF employee entered Rosenfield's garage to fix a leak. Rosenfield then called police. At the hearing, Okamoto claimed that Rosenfield approved this request. Another gym employee testified at the hearing to verify this. Okamoto also said that any other time Smith came to Rosenfield's home was prior to the restraining order against Rosenfield and was approved by Rosenfield beforehand.

"You have not carried the burden of proof of clear and convincing evidence of harassment and unlawful violence," Dekreon said.

Rosenfield denies these accusations and said he has simply complained about maintenance issues that have been neglected by his landlord. He admitted to calling Jackovics' wife, but said that the conversation lasted less than a minute and he was addressing an incident in which he said his garage was broken into because it was not properly secured by his landlord. Rosenfield did not file a police report, and said nothing was taken.

"I never made any such threats to any of them, and have never said anything that in any way resembles wanting to personally or professionally harm him or his family," Rosenfield said in a document he sent to the B.A.R.

He continues to stand by his opinion that Jackovics is using the restraining order to intimidate him and eventually harass him out of his home.

"It is increasingly common for San Francisco landlords to get fictitious restraining orders against protected tenants to harass them out of their homes," Rosenfield said on a website he created about landlord and tenant disputes. The site has now been taken down. "There's a lot of money behind displacing protected tenants, and ROs are a relatively inexpensive tool used by SF's most unethical landlords and displacement attorneys."

Rosenfield is currently unemployed and suffering from depression, he said. Okamoto requested that Rosenfield pay for the legal fees of Smith and Jackovics. Dekreon said she would take it under submission.