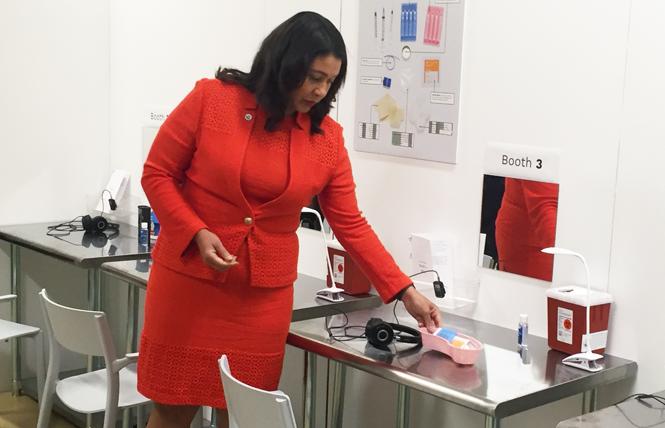 San Francisco Mayor London Breed checked out an injection station at the Safer Inside demonstration last August that was set up to show the public what a safe injection facility might look like. Photo: Liz Highleyman

"Public drug injection reflects a failure in our health care system, and we have an obligation to try new approaches to help people get healthy," Wiener said in a statement. "San Francisco has a long history of pushing the envelope on progressive public health solutions, including medical cannabis and needle exchange, before either was legal or broadly embraced. With AB 362, San Francisco, once again, can lead the way on progressive change for our community and for all of California."

Last year AB 186 passed the state Assembly and Senate, only to be vetoed at the last minute by Brown. A broader bill, which also applied to several counties outside of San Francisco, narrowly failed to pass the Senate in 2017.

Supervised injection facilities allow people to use drugs under the watch of trained staff, reducing the risk of overdose deaths. They provide sterile needles to prevent transmission of HIV and hepatitis B and C, and offer clients an entry point for seeking medical care and addiction treatment. Indoor sites also reduce street-based drug use and improper syringe disposal, a growing problem in the city.

"San Franciscans understand how desperately we need these programs," said Laura Thomas, deputy state director for the Drug Policy Alliance. "These programs will reach homeless people who use drugs, move them and their syringes off the street, protect their dignity and health, and provide a pathway to drug treatment and other services."

There are currently around 120 safe injection sites worldwide. San Francisco is among several cities vying to open the first such facility in the United States, but all have faced legal and political hurdles.

Mayor London Breed, who lost her younger sister to a drug overdose, has been a proponent of safe injection services for people who inject drugs, who now number around 24,500 in San Francisco, according to a recent Department of Public Health estimates.

Last week Breed announced the appointment of Dr. Grant Colfax as the new head of DPH. He told the Bay Area Reporter that he supports supervised injection sites.

"I have looked at the data — we have years of data — and it shows safe consumption sites save lives and have a positive effect on the community," Colfax said in an interview with the B.A.R. "I look forward to looking at how that possibility can potentially be realized."

New Governor Gavin Newsom has also indicated he is open to the idea of a pilot supervised injection site, raising the odds that legislation could pass this year. Like the preceding bill, AB 362 would amend state controlled substances laws to allow San Francisco to implement a three-year supervised injection pilot program.

Despite local and state support, however, the federal government remains a roadblock. Last August, U.S. Deputy Attorney General Rod Rosenstein penned an opinion piece in the New York Times, stating, "It is a federal felony to maintain any location for the purpose of facilitating illicit drug use. ... Because federal law clearly prohibits injection sites, cities and counties should expect the Department of Justice to meet the opening of any injection site with swift and aggressive action."

But legislators and advocates were not deterred. Responding to Brown's veto last fall, Wiener stated, "We should not allow threats from a backward federal government stop us from helping people who are dying on our streets."

Eggman noted that supervised injection legislation has gained growing support over the past few years.

"This will be my fourth year working on this issue and each year we've moved closer toward making these life-saving programs a reality for people facing the greatest risks during our opioid crisis," she said. "This bill will grant us another tool in the fight — to provide better access to treatment and counseling, to better protect public health and safety, and to save lives."