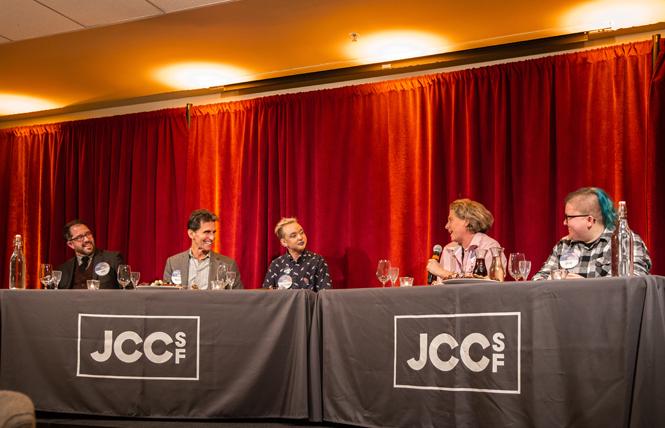 Stoner, 18, teaches about transgender and ally issues at schools around the San Francisco Bay Area and is the publisher of the zine Transvestia.

Feldman, 16, is a junior at Mission High School and is the communications vice president of the Sherith Israel Temple Youth Group, as well as a youth educator at the temple in San Francisco.

The discussion was moderated by Ben Doyle, a trans man who is chief program officer of Family Life at JCCSF.

The panelists spoke about a range of experiences and issues. Topics included coming out; their own activism in queer, Jewish, and other movements; and how they take care of themselves in order to do their work. They also discussed the importance of remembering history and dealing with America's past issues and modern-day struggles in order to move into the future.

Jane Davis, a 27-year-old self-identified gay gender-fluid individual who is the teen program manager at the center, noted that the uniqueness of the dinner is that it brings together veterans and the new generation of LGBTQ community leaders in conversation.

"You are not just listening to a couple of adults talking about the queer community, you are hearing from the folks who are growing up in the time now," said Davis. "They are really leaders within their community and kind of paving the way [for] the next generation to make big changes."

Leno, 67, is a member of the baby boomer generation. He told the audience that this year is the 50th anniversary of his coming out.

"Every generation thinks that its generation is the generation, but it should not be forgotten, of course, all of those who put their lives on the line," said Leno. "It is from one generation to the next, building upon what has been accomplished, making sure that we do not lose ground and keeping the eye on the ball of justice and equality to move it forward."

The youth on the panel were interested in the generations that came before them, and they were more pragmatic about the battles ahead and the time it takes to create real change.

Seizing the moment
"Every one of us in this room have an opportunity ... I want to encourage everybody to jump in," said Leno, recalling a story House Speaker Nancy Pelosi (D-San Francisco) once learned from an African leader during a diplomatic trip to the continent.

Recalling the parable Pelosi reiterated, he told the audience God asked a man who had just died to show him his scars during his time on earth. When the man said he didn't have any scares, God asked, "Really? Was there nothing worth fighting for?"

"You have to be in the ring to fight," Leno said Pelosi concluded.

"We all have the opportunity," said Leno, recounting his 18 years in community and public service while still running a successful small business. "You never know where it's going to take you, but follow your heart and realize that we all have seeds to plant."

Stoner realized his moment when he was still in high school. As one of the first transgender kids to come out at school, he was sexually harassed and repeatedly assaulted. The school administration did nothing despite his constant reporting of the incidents, he said.

During his senior year he realized there were more transgender kids on campus.

"Mostly what drives me is I don't want people to go through what I went through," he said.

Zaid, a 50-year-old lesbian and a member of Generation X, came into her activism through the poetry of Adrienne Rich. She noted that there are also indirect ways of being an activist that aren't as obvious.

She told the story about an administrator accidentally asking her for a mother's name and a father's name after her first son was born. She corrected the administrator. Her mother, who was with her, said, "You're so brave."

"We are not always going to feel like we are activists," she concluded. Once she had a child, being out was a fact of life from that point forward, she said.

It's these teachable moments where Feldman, the high school student, practices her/their activism.

Feldman told a story about speaking up when another student was making her/them uncomfortable using the word "dyke" in a derogatory way at school one day. Teachers weren't taking any action, so Feldman took it upon her/their self to educate her/their classmate.

"I know that I'm probably not going to be able to change a whole crowd's mind," Feldman said, "but if I can just work on one person just to get to know them one-on-one so they can, like, see a person whose words are affecting them."

Being real about social change
When asked about their hopes a century from now, Zaid's first response was in reference to climate change.

"I sure hope we are not underwater here," she said.

She acknowledged that she would love to talk about Jewish and queer life, but issues of survival were at stake.

"I feel like the problems that are assaulting us involve our environment and economic inequalities ... those are front and center," she said. "I don't see how we can have those other problems if we don't solve these ones first."

Leno turned to Stoner's historical observation that despite the ratification of the 15th Amendment granting African-American men the right to vote in 1870, more than a century later voting rights is still a major issue in parts of the country.

"Even with the passage of time. Even with constitutional certainty of justice and equality, there are some folks who just aren't coming along," said Leno, citing the fact that the United States hasn't addressed the bigotry of its past.

"We have to recognize that, but we shouldn't let it deter us one bit," he said.

Leno noted that the way forward is by being loving and supportive, pointing to the importance of Feldman's incremental work connecting with people one-on-one.

"The best way to communicate is through example," he said.

The event was hosted by The Q, an LGBT Jewish peer-led queer teen group founded at JCCSF in 2012, according to the group's website.