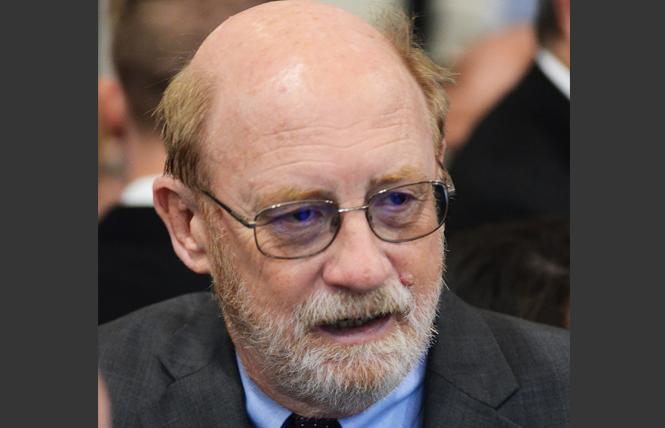 A number of LGBT leaders have signed on as early endorsers of gay former Assemblyman John Laird's 2020 bid for a state Senate seat.

Among them are gay state Senator Scott Wiener (D-San Francisco) and his predecessor, Mark Leno, who with Laird became the first two out gay men elected to the state Assembly in 2002.

Wiener, in an interview with the Bay Area Reporter, called Laird "a true talent" and a "highly effective legislator" who "will be a real asset as a colleague in the Senate."

Santa Cruz City Councilwoman Donna Meyers, elected in November as the first lesbian on the body that Laird served on in the 1980s as its first out LGBT member, has also endorsed him in the race to succeed Senator Bill Monning (D-Carmel), who is term limited from running again next year.

Laird officially announced his candidacy for the Senate seat, which includes Santa Cruz and San Luis Obispo counties, the coastal areas of Monterey County, and southern Santa Clara County, January 17. The news was hardly a surprise, as the B.A.R.'s Political Notebook reported January 9 that Laird had filed paperwork to form a Senate campaign committee and was expected to soon formally disclose his candidacy.

Laird, 68, lost a 2010 Senate bid, leading to former Governor Jerry Brown appointing him as California's secretary for natural resources in January 2011. He stepped down from the cabinet post January 7 hours after Governor Gavin Newsom took his oath of office.

"I really don't want to sit around for 25 or 27 years in retirement," Laird told the B.A.R. in a phone interview last week. "I feel like I am at the top of my game and still have a lot to contribute."

Laird could potentially serve two four-year terms in the Senate. By declaring his candidacy more than a year before the primary, which will be held in March due to the 2020 presidential campaign, Laird is likely to clear the field in terms of other Democrats jumping into the race.

"To mount a strong campaign, you have to start early," said Laird, who lives with his husband, John C. Flores, in Santa Cruz. "Secondly, it is to line up significant endorsements and make anybody else thinking about entering the race to think otherwise."

Laird has reached out to several people who had been looking at the race to seek their endorsement. So far, it does not appear any prominent Democrat will run against him.

Both Wiener and Meyers said no one else had sought out their support in the race. There is still time for someone to jump in, as the filing deadline isn't until December 6.

"I think it is a little early, but I sense that John is very most likely positioned to be the lead candidate potentially for the seat," said Meyers.

Due to the current boundaries of the Senate seat, it is seen as a safe Democratic district.

"If Trump is at the top of the ticket, I don't think Republicans will be flipping anything," said Laird of his electoral chances.

Nonetheless, he plans to blanket the district over the next two years and knock on hundreds of thousands of front doors. His campaign will focus on three main issues.

Environmental record seeds Laird's Senate run
Another top concern Laird intends to address is climate change and its devastating effects on California. It is a particular concern for the Senate district, as it is vulnerable to sea level rises, wildfires, agricultural degradation, and drought.

As he noted in his campaign announcement, Laird was "on the front lines in the effort to fight and adapt to climate change" as the cabinet secretary. He oversaw a state agency with 25 departments, 19,000 employees and an almost $10 billion budget.

"In regard to the challenges presented by climate change, there is some urgency to addressing it. The latest science just has driven that completely home," said Laird, who once taught state environmental policy at UC Santa Cruz. "California is ahead of every other state in terms of addressing climate change and yet, given the tipping point that is coming, we might even over time have to accelerate some of our deadlines."

He expects that, prior to his being sworn in as a senator, Newsom's administration will finalize the plans for the controversial Delta water tunnel project that Brown championed. The wildfires that decimated Ventura County, Napa, Sonoma, and most recently Paradise outside Chico, presented Laird his greatest challenge while working for Brown.

Another difficult point in his tenure came when the spillway for the Oroville Dam failed in February 2017. It led to the evacuation of nearly 190,000 people and prompted officials to take a closer look at the safety of 1,500 other dams around the state.

"That was just one of the bigger crises of my time," Laird recalled. "California had the best dam safety programs — and that is d-a-m and not d-a-m-n — of the 50 states and yet it wasn't enough ... Now, we are making sure in a 12-month calendar year every dam under state jurisdiction is inspected."

Another "all-hands-on-deck moment," recalled Laird, was President Donald Trump's election in November 2016 due to his promise to rollback myriad environmental protections and pull the U.S. out of the global climate accord. It led Laird to work closer with his counterparts in Oregon and Washington state in forming international alliances focused on various issues, from ocean acidification to carbon gas emissions.

"In the absence of national leadership we weren't going to stand by. We were going to do that international leadership on the climate," said Laird. "Things were done by the state's air board, environmental protection agency, and agriculture department in a similar way."

As for Trump's call for wind turbines off the Pacific Coast, Laird said he is not opposed to the idea. But he believes it needs to first be piloted in a demonstration project to see if it is feasible.

"People do have concerns about the drop off of the ocean floor off California, which is more dramatic than off the East Coast or Denmark. That is an issue, as is what is the transmission back to the coast; how is that going to work," said Laird. "Is it in any sea lanes and is that a genuine problem? So let's do a pilot project."

Another area he oversaw was the state parks, which went from having to close various sites due to a lack of funding to having a dedicated revenue stream from a voter-approved transportation tax.

Some of the changes that occurred under his watch was the digitization of park maps, the ability for parks to accept credit or debit cards, and ending the requirement that regional park directors and superintendents be badged law enforcement officers, which had been an impediment for the advancement of women and people of color.

"We made lot of reforms to the parks department, and I feel like it is in much better shape," said Laird.

He now wants to bring his myriad leadership experiences to bear in the state Senate.

"I have worked the last 40 years to be ready for the next eight as a senator," said Laird. "I've served in public policy, as a congressional assistant, local government analyst, mayor, city councilmember, transit board member, transportation commissioner, community college trustee, community activist, state legislator and governor's cabinet secretary. I want to bring that experience and leadership to meet our challenges."

Political Notes: Out California candidates pick up endorsements
Sign up!