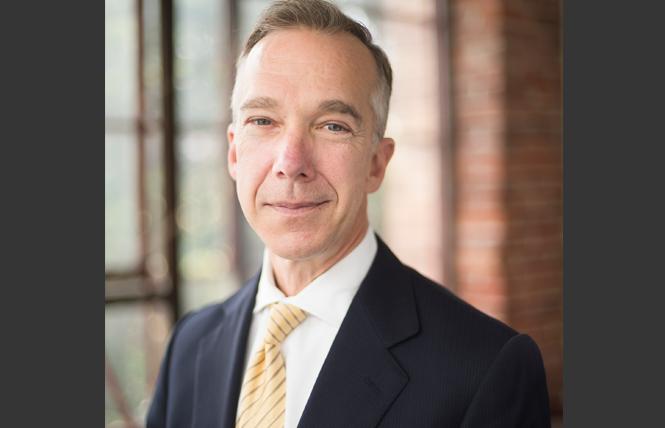 The gay CEO of Project Open Hand will soon have a new job as president of the Saint Francis Foundation.

Mark Ryle is set to lead the foundation, which raises funds for Dignity Health Saint Francis Memorial Hospital. He starts March 1. Ryle will replace interim president Ann Lazarus, who has held the position since May 2017 and was the former executive director of Mount Zion Health Fund for 13 years.

"What excites me is the foundation's commitment to be the bridge between the complex struggles of the Tenderloin population and its families and serving their entire needs and the population of Nob Hill," Ryle, 55, told the Bay Area Reporter. "To continue what has been done and to help fund those communities and the hospital is a real honor."

The foundation, created in 1979, is responsible for acquiring grants and fundraising for the Saint Francis Memorial Hospital and the communities it serves. The not-for-profit community hospital has been operating since 1905 in the Nob Hill area of the city. It is known for serving and advocating for poor and disenfranchised people.

As CEO of Project Open Hand, an agency that offers meals and groceries to people with HIV and other illnesses, for six years, Ryle worked closely with Saint Francis as a community partner to help improve health outcomes in the Tenderloin. He said leaving Project Open Hand had never crossed his mind before talking with folks from the foundation.

"It feels like I am going to something, not leaving something," he said, adding that creating change for various communities including in the Tenderloin, which houses some of the cities most vulnerable populations, is something he looks forward to and will also be a challenge.

The leadership team and board of directors will jointly lead Project Open Hand until a new CEO is selected, according to Leah Weatherspoon, director of marketing and communications for the nonprofit.

Although Ryle explained that his priorities and goals for the foundation will begin to form after he more deeply understands the needs of the communities it serves, he plans to put effort into explaining the foundation's work.

"The foundation can do a better job of talking about the stories of the work we do and telling it through the people we serve," he said. "We will begin to talk about the powerful work being done and the beautiful stories as well as provide the hard numbers for how we help the city."

He said as a gay man he is committed to seeing the foundation's partnerships in the LGBT community grow and help expand services to LGBTs. He mentioned that in the spring, the foundation will introduce an initiative that addresses the needs of the LGBT population, though he was unable to give details.

More broadly, he will focus on "strengthening existing partnerships," and "developing new ones to continue meeting San Francisco's emerging health care needs in transformative, compassionate ways," he said in a news release.

In the release, Michael Soza, the foundation's board chair, said, "We are extremely fortunate to have Mark Ryle join the Saint Francis Foundation as our new president. Mark's unique experience and background are perfectly suited to furthering the mission of our organization as we strive to provide critical funding support for Saint Francis Memorial Hospital."

Prior to his role with Project Open Hand, Ryle served as the health services director of Huckleberry Youth Programs in San Francisco. He also founded and served as director of Fundacion Huesped/Proyecto La Calle, a Buenos Aires organization providing food and housing for street-engaged adolescents. He holds a master's degree in social work from the University of Chicago and is a licensed clinical social worker. He has completed graduate certificate programs at Stanford Graduate School of Business and Harvard University Kennedy School of Public Policy.

"We are a little hospital doing incredible things," Ryle said.

Ryle did not provide his salary at his new position in time for this article to go to print. A spokeswoman said the foundation's operating budget is about $2 million. The Saint Francis Foundation had almost $80 million in assets, according to the 2016 Form 990; the former president earned just over $300,000 in salary and benefits.