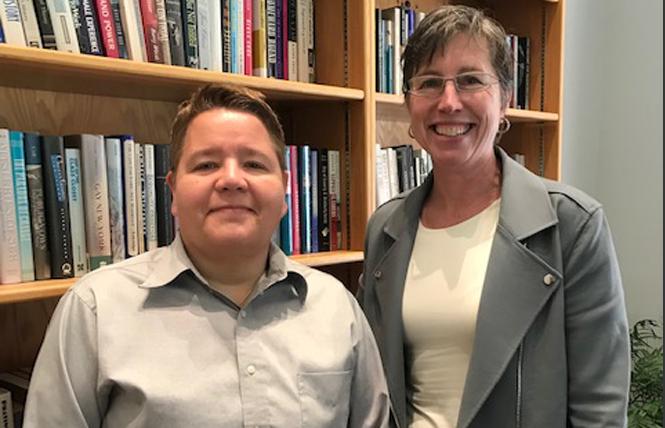 We believe that the denial of rights to transgender people, due to changes in federal law, can be mitigated. Here's how:

For as many times as we may have asked lately, "But, what can I do?" the 2018 midterm elections remind us how much local engagement and influence matters. It's time to act. As the U.S. Departments of Justice, Education, and Health and Human Services reconsider federal civil rights laws that protect transgender people, and as the courts continue to block the implementation of President Donald Trump's proposed ban on transgender military service, state and local laws, and the policies of institutions, deserve our attention. Changes in federal policy are only part of the civil rights equation. Working toward better federal laws and more inclusivity at the national level is essential, but it's neither enough nor our only option. Even when federal laws mandate equity, experiences on the ground vary at different institutions, and in different geographic locations. Institutional policies, local ordinances, and state laws can also promote inclusive workplaces and educational environments. Policies don't just happen, they are created by leaders. Action to revise and implement protections beyond the federal government is available to all of us within our own communities, institutions, and states.

Federal legislation is important to the progress toward civil rights for transgender and gender-nonbinary groups, but it's not the only opportunity to address inequities. States, after all, have more power to act than the federal government, which has only limited authority and impact.

There is a long history of states being the first to act to address those inequities. The state of Wyoming affording the right of women to vote in 1890, 29 years before that passage of the 19th Amendment. Today, this effort of states to lead the way continues. A California law, signed by Governor Jerry Brown, specifies that high school students can join sports teams and use bathrooms based on their gender identity. In 2017, the Oakland City Council, led by out Councilwoman Rebecca Kaplan, approved expanded public access to gender-neutral bathrooms, a critical public health and safety issue for our communities. And as of January 1, the state of California legally recognizes nonbinary as another gender on official state identification documents. Brown also signed the Gender Recognition Act that allows greater choice for intersex, nonbinary, and transgender Californians who apply for driver's licenses and state identification cards. Other states — and other countries — have already adopted, or are considering, similar legislation. Leadership at the state and local level can cause a ripple effect of change that directly impacts people's lives.

The leaders of higher education institutions must also stand up to this challenge. At Mills College, our institutional commitment to inclusivity, including for transgender people, is a core value regardless of federal mandates. In 2014, Mills was the first women's college in the U.S. to adopt a transgender-inclusive undergraduate admissions policy, setting a new standard that has been followed by nearly every U.S. women's college, and most recently, by Ochanomizu University in Japan. Yet, we have work to do to create and maintain an inclusive academic community at Mills, an aspiration that requires constant vigilance.

As new federal policies restrict protections for transgender people, we can act locally to influence our communities. As leaders, we must listen to those most affected by discrimination and make our own positions and voices clearly heard. Educating ourselves about the legal protections currently available in our institutions, cities, and states is the first step.

Here's how to get started:
- Visit the Transgender Law Center online (http://www.transgenderlawcenter.org) or in Oakland, California. It's the largest trans-led civil rights organization in the U.S. and a good place to start.

- Visit your city and state websites and call your elected local officials and ask them to support trans-inclusive policies and legislation.

- Most cities and states have LGBTQ organizations that provide advocacy and work on policy changes. Ask how you can join in and volunteer to help.

- Many youth organizations and faith-based organizations offer opportunities to support gender-nonbinary youth. Ask how you can get involved.

- Recognizing that individual action is as powerful as institutional transformation, respect each person's dignity and autonomy regardless of gender in your own interactions with people in your communities.

Transforming local law and policy may be the best way to advance equity and seek justice.