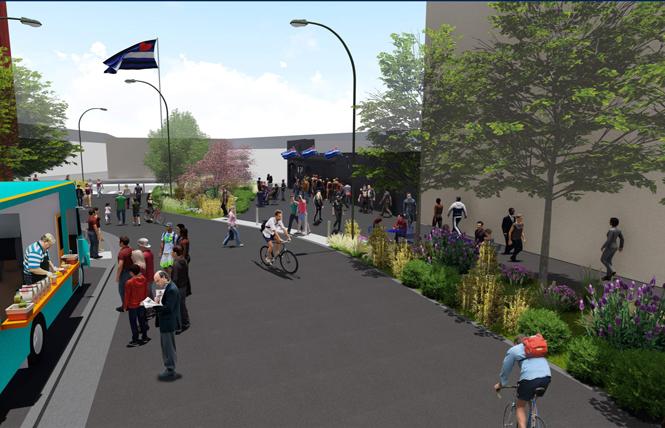 San Francisco Mayor London Breed has stepped in to expedite the permit process for the construction of a leather-themed parklet in the city's South of Market neighborhood.

Eagle Plaza, named after the gay-owned bar it will front on a portion of 12th Street, is seen as a focal point for the LGBTQ cultural heritage district city officials created in western SOMA to celebrate its being the home of the city's leather community.

On Tuesday Breed's office introduced an ordinance to the Board of Supervisors to grant a major encroachment permit for the project so that it can take over the block of 12th Street between Harrison and Bernice streets. The supervisors' land use committee is expected to approve the permit in early February, with the full board following suit shortly thereafter so that work can begin the following month.

"Eagle Plaza is a celebration of our city's LGBTQ heritage and our leather community, and it will create a vibrant public space in the heart of the Western SOMA neighborhood," said Breed in a statement to the Bay Area Reporter. "We will be moving this ordinance forward quickly so that we can get this important project moving."

"The root of Build's work is to help create great urban places, and we love that this project will add both homes and public space to San Francisco," stated Lou Vasquez, a principal at the firm.

Place Lab, started by Build and now part of the nonprofit San Francisco Parks Alliance, is overseeing the design of, and permits for, Eagle Plaza. The goal is to dedicate the parklet ahead of this year's Folsom Street Fair in late September.

Place Lab Director Brooke Ray Rivera said having Breed's office move forward with the permit "is fantastic. We are so grateful and thrilled because this is such an important cultural project and open space project in a neighborhood that needs it so badly."

Gay District 8 Supervisor Rafael Mandelman and District 6 Supervisor Matt Haney, who represents SOMA at City Hall, are co-sponsoring the permit request. It had been expected that Haney would take the lead on introducing the ordinance.

But Breed spokesman Jeff Cretan told the B.A.R. that, due to the complicated nature of the project, which has been caught in a bureaucratic morass due to numerous city departments needing to sign off on it, the mayor's office decided to be the main sponsor in order to ensure it was approved.

"This is an incredibly complicated interdepartmental issue, so the mayor has stepped in to move this project forward, which she knows is incredibly important for the community," said Cretan.

Project scaled back
As the B.A.R. reported last fall, the scope of the project has been significantly scaled back due to access issues voiced by fire officials. Its greenspace has been reduced in order to accommodate fire trucks and other safety vehicles.

Rather than close down that stretch of 12th Street, it will remain open to traffic in both directions via a curving, 28-foot-wide two-lane roadway through the plaza. Bollards will be used to close off the street at both ends for special events.

The border for a gathering space in front of the Eagle bar dubbed the Eagle Porch has been designed to allow for fire trucks to back into the area and turn around inside the plaza. San Francisco Public Works also required that the plaza's chairs and tables be removable rather than permanent.

"It is unfortunate we lost some of the design characteristics we were originally proposing," said Eagle co-owner Lex Montiel, an early supporter of the project and a member of the Friends of Eagle Plaza group. "But we understand this is a process for the city."

To learn about other naming opportunities and to donate to the project online, visit http://www.eagleplaza.org/.