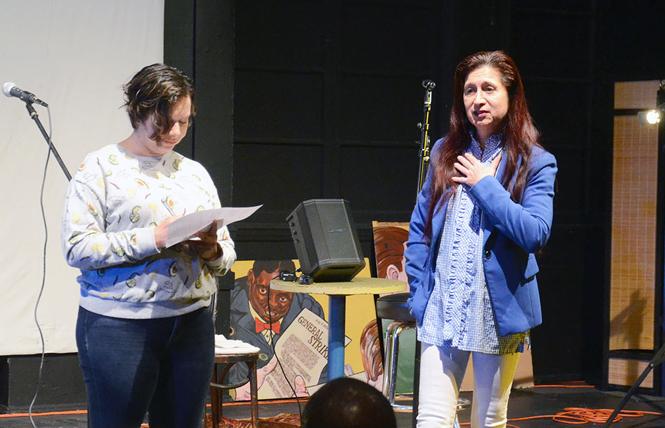 Isabella Torres, right, speaks of the importance of El/La Para TransLatinas for Spanish-speaking transgender people during a musical/social event informing the community about the status of the Redstone Labor Temple Building, where the organization has its meeting rooms. Photo: Rick Gerharter

After over a century as a hub of community activism, the 55,000 square foot red brick building at the corner of 16th and Capp streets has fallen prey to wealthy real estate developers. Now, a local organization's bid to save the site is one of the last hopes for this Mission district landmark.

Redstone Labor Temple's longtime landlord, David Lucchesi, has until the end of February to accept the final offer of $18 million from the Mission Economic Development Agency. The nonprofit housing developer offered the bid in December.

During a news conference and rally January 12 in an unused former theater space, an experimental art space inside Redstone, about 20 people gathered to show their support. Local musicians sang songs denouncing gentrification and displacement. Ironically, representatives from the San Francisco Labor Council were no-shows, despite the building's rich labor history.

Gary Gregerson, a tenant and president of the Redstone Labor Temple Association, has rented his music studio in the building since 1995, and for nearly 25 years he has seen new tenants arrive from shuttered San Francisco community spaces.

"It's a nationwide struggle," Gregerson said during the rally at 2940 16th Street. "It's one of the last places [like it] in the city, definitely in the Mission. That's what we're fighting for. That's why we need to keep this building here. We have a wide range of artists, nonprofits, and small businesses here. We're gonna need the whole city to make this happen."

Even if MEDA buys the building, additional funding will be necessary. With an appraised value of $17 million, the four-story building was put up for sale last year for nearly $25 million, Mission Local reported.

In a statement, MEDA said it is still negotiating the purchase price for the Redstone building.

"We are in need of the support of the city, foundations, and the community to make this deal a reality," MEDA spokesman Christopher Gil wrote in an email. "Our community-based organization is steadfastly working on solutions for cultural placekeeping in the Mission and throughout San Francisco. In addition to keeping cultural institutions in their current homes, MEDA will have nonprofit/art spaces in its three new constructions in the Mission: 681 Florida Street; 1990 Folsom Street; and 2205 Mission Street."

Photographer Rick Gerharter, who called Redstone a "godsend" after he was evicted from a Bernal Heights live-work building 15 years ago, hopes MEDA and the landlord make a deal.

"I hope they can come to an agreement to upgrade the building and below-market rate [rents] can continue," said Gerharter, a gay man and longtime freelance photographer for the Bay Area Reporter. "I hope that it becomes a safe, modern, functioning, nonprofit home for the people. We're really a community center."

Twenty years ago, the Redstone Labor Temple Association was formed by tenants to defend against the threat of predatory developers seeking to profit by clearing the building of its low-budget advocacy organizations and artists, read a statement from the association.

Since September 2018, a GoFundMe page titled "Save Redstone Labor Temple" has raised $6,525 of its $9,500 goal. Additionally, a Change.org petition seeking the support of Mayor London Breed has garnered nearly 600 signatures of its 1,000 goal.

"We need the word out to people and put pressure on city officials," Gregerson said.

Isabella Torres is a member of El/La Para TransLatinas, a transgender support group whose office is in the Redstone. Torres, a Colombian native, along with about 30 others belong to the group, many of whom are seeking refuge from their transphobic hometowns.

"We're not just protecting bricks and a building, we're defending people," Torres said during the rally. "It's the place where we can get something to eat. It's a place to stay when it's cold. We can get our medications when we need them. It's become a home and safe space."

Local LGBT organizations who used to call the Redstone home include the GLBT Historical Society; the Sisters of Perpetual Indulgence, who had a storage space there; and Theatre Rhinoceros.

Scott Peterson has his Archive Productions there. He has recorded thousands of LGBT events over the years.

Built in 1914 by the San Francisco Labor Council, the Redstone building was the epicenter of organizing for the San Francisco General Strike of 1934. According its website, after 50 years as a labor temple, the building became a community center in 1969.

"MEDA stepped in at a good time," Gregerson told the B.A.R. "There was a cash bid for $21 million from WeWork. I'm really glad that MEDA stepped in and is trying to broker something. If an entity like that came in we would be in trouble."

Gerharter believes a space like Redstone is needed now more than ever.

"There's a rich history here, certainly for the queer community, for the city, for people's movements, for working-class people," Gerharter said. "But given the recent history of displacement in the Mission, I think the support of the building from the city will be there.

"It's too valuable," Gerharter added. "There's fewer and fewer of these spaces left. I do think it will not become a market-rate office space. I think they may try it, but if you want to do a start-up, do it somewhere else. Don't come to 16th and Mission."

Updated, 1/25/19: This article was updated to include the correct name of the space where news conference was held.