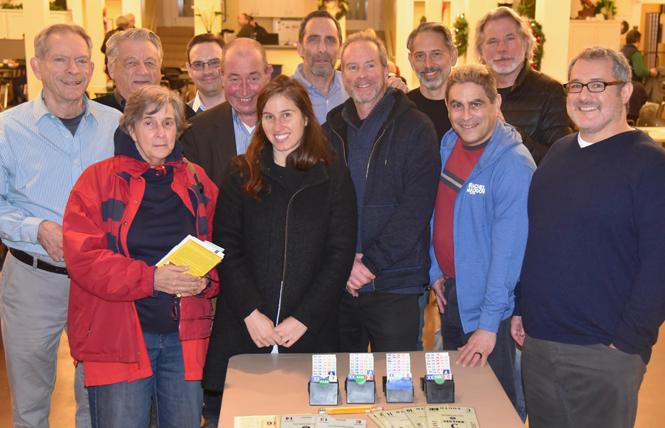 When a handful of gay men got together to play bridge regularly in 1978, they had no idea the group would be setting attendance records four decades later.

That's the success story of Quick Tricks, a Castro-based bridge club that typically attracts over 150 players and students to its Monday night game in the basement of Most Holy Redeemer Church.

"I didn't think the game would survive the AIDS epidemic," said Jim Leuker, 72, one of the club's founders, who left a successful career in technology to teach bridge.

Leuker, who has seen the world on six-star cruise ships as a bridge teacher, attributed the club's success to its teaching program.

"No question that's why we are doing so well," he said.

For the past 10 years, two longtime players, David Fielder, 69, and John Corey, 59, have taught Quick Trick's annual series of bridge lessons, known as Easy Bridge. Fielder, a retired theater manager, and Corey, a staff attorney with the California Supreme Court, met at Quick Tricks two decades ago, when they became bridge partners and, later, a couple, marrying in 2013.

Fielder said the class is based on a nationally recognized teaching method that allows people to feel comfortable and enjoy the game.

Under their tutelage, the classes have attracted a growing number of students, often recent retirees who learned the game at college and now have time to return, and neophytes looking for a new hobby.

This year's series of 15 weekly lessons, held on consecutive Monday nights, begins Monday, January 28, at 6:30 p.m. While one doesn't need to attend with a partner, it is necessary to sign up in advance to reserve a slot.

Learning bridge is often more than what new students have bargained for, said Fielder in a recent interview.

Many students seem to think, "Oh, it's a card game, I can learn this in a week," he said, laughing.

Easy Bridge allows the students to start playing from the very first lesson, said Fielder. People "don't want to sit in a boring lecture," he said. "They are there to play, and we get that started immediately."

Although most clubs are filled with retirees, there are always a few techies at club games.

Zack Karlsson, 41, a gay man who is founder and chief executive officer of start-up EdTech, has played at Quick Tricks and is now going back for lessons with his partner, Derek Shockey, 35, a software engineer.

Karlsson, a veteran of the gaming industry, said he believes bridge would appeal to "anyone who enjoys strategic thinking in games."

"It's one of the more complex games I've played, but the ramp-up is not intimidating," he said. "It's got a very high top-end of the learning curve such that you can spend a nearly infinite amount of time learning to master it in new and interesting ways."

Easy Bridge instructor Corey said those who are "logical and analytical" can succeed at bridge.

"It involves making a plan and accomplishing it," he said. "If you can do that, you can play bridge."

Corey touted the game as more than just a place to compete, but to meet people one might not meet elsewhere.

Nationally, the game of bridge is often described as "dying" as a result of its original stalwarts, middle-class women, entering the workforce.

But in the Bay Area, the game seems to be "doing quite well," said Kim Fanady, a straight ally who manages Quick Tricks. Fanady, an attorney in private practice, attributed the club's success in part to the quality of the teachers.

"Quick Tricks is a huge success story," she said, pointing to statistics that indicate that the number of people coming to the club has doubled in the past 10 years.

Dianne Barton-Paine, whose family owned bridge clubs beginning in the 1930s, made a name for herself nationally, when at age 18, she became the youngest person ever to be named a "life master," a title that indicates a player has achieved a certain level of expertise. She appeared on the 1960s game show, "What's My Line?," shortly after she received that honor.

Barton-Paine, a 75-year-old lesbian who directed games at Quick Tricks for two decades before starting her own bridge club 10 years ago, has also seen record attendance at her club, known as PIPS (https://concordiabridgeclub.com/), which meets on Thursday afternoons at St. Mary's Cathedral.

Barton-Paine, who also works full time directing bridge tournaments nationwide, is "just too busy" to play much, she said.

"I get in maybe one or two games a year," she said. "When I retire, maybe I'll have time to play."

For more information on Quick Tricks or the Easy Bridge lessons, visit http://www.quicktricks.org. Games cost $6 per person. If you don't have a partner but would like to play, contact the club's partnership coordinator, Bruce Osterwei, at mailto:Bruceo.bridge@gmail.com.