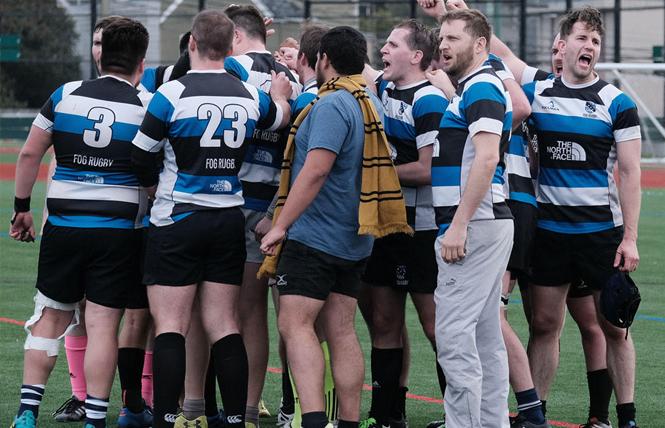 The season for rugby, that most aggressively affable of team sports, is upon us. Forget the transient wind, chill, and rain: this is the season for the Fog.

As in the San Francisco Fog, an iconic LGBT-centric rugby team that plays in the Division 3 club of the Northern California Rugby Football Union. The Fog started its 2019 season last weekend with a 37-26 home victory over the Aptos Beach Dogs. The season continues this Saturday with a home match against Bay Area Baracus at Minnie and Lovie Ward Recreation Park, 650 Capitol Avenue in San Francisco.

"Fog rugby was established in 2000 with the mission to be the preeminent rugby club in the world that actively pursues the participation of people of color, gay men, and other groups traditionally underrepresented in rugby," said Tony Folenta, who is the club's marketing officer and plays the forward positions of prop and hooker. "Over the years our mission has evolved, but we still hold the original mission in high regard. When the Fog was founded, we were the second gay rugby club in the U.S. after the Washington, D.C. Renegades. Now, there are nearly 30 gay and inclusive rugby clubs across the country, and many more around the world."

The Fog runs an annual five-week introductory program called "Pathway to Rugby" to acclimate would-be players to the sport.

"I joined the Fog in the fall of 2016 through the Pathway to Rugby program," treasurer Joey Van Matre, who plays the lock position, said. "I had never played a team sport, and since rugby isn't as popular of a sport, I figured that I wouldn't be the only complete novice on the field. Rugby is great because it is equal parts teamwork, skill, and aggression. If you don't know the sport, all you see is the aggression and the tackles — but there is so much more happening on the pitch."

Van Matre said the Fog made his entry into the sport easy.

"The Fog is a really welcoming environment for gay players," he said. "I would have never felt confident enough, as a total rookie and an out gay man, to join a team that didn't put inclusion at the forefront. We have players and coaches from all over the LGBTQ spectrum, as well as many straight allies. Seeing gay players that were in the starting lineup and leaders on the team and gay players who were missing every pass like me on my first day really gave me confidence that I could be part of the team and grow."

Folenta, 29, is in his fourth season with the Fog.

"A few years ago, I found myself looking for a new social outlet, something healthier than the gay bar scene," he said. "I had a number of friends on the rugby team, including one of the club directors at the time. I decided to come out to one of the team's Rugby 101 clinics — a Saturday event where the club would host a rookie clinic with some basic drills before one of the regular matches. Prospective players would warm up with the team, then watch the match, and then join the team at the bar for the post-match social."

"I fell in love with the camaraderie of the group — everyone felt like family, and was incredibly welcoming to the rookies," he said. "Prior to the Fog, I'd had zero experience with organized sports, but within a few weeks of coming out to practice, I was thrown into a match."

Trial by fire, one scrum at a time.

"Rugby is a thrilling sport," Folenta said. "The pace is quick, the plays are exciting. The team is made up of a diverse group of body types and skills — small, fast guys and big, hard-hitting ones. For someone like me, with a few extra pounds and a stocky frame, rugby let me prove to myself that I could do something I didn't think I was able to do, and do it with a team at my side, supporting me. Rugby's an outstanding outlet for releasing stress and building athletic skill. The Fog, in particular, has become my family here in San Francisco."

Currently the Fog draws about 25 to 30 people to its practices, representing a wide diversity of ages, body types, and skill levels.

"We don't have a dedicated women's side, but we do have a few women who regularly practice with the Fog and who play for the Fog in friendly matches," Folenta said. "While we have women who are part of the team and the Fog family, we haven't been able to pull together an entire women's side in many years. The Bay Area has several women's teams, notably the SF Golden Gate women's team, and the Berkeley All Blues. We work with our sister teams to ensure that our women players have the opportunity to play, and we also organize friendly matches with men's teams in our division so that our women ruggers get to play for the Fog. We also have a number of transgender men in the Fog family, and we actively advocate for inclusion of transgender men in men's rugby."

The most famous Fog veteran, of course, was rugby national champion Mark Bingham, one of the heroes who died during 9/11, crashing a plane into a Pennsylvania field rather than allowing terrorist hijackers crash the plane into an intended target in Washington, D.C. His life has been the subject of documentaries — including "Legacy: The Mark Bingham Story," released earlier this month and available on YouTube — and the International Gay Rugby biennial world championship, the Bingham Cup, was named after him. Compete magazine gives out an annual Mark Bingham Athlete of the Year Award.

Fog practices are on Tuesday and Thursday evenings. For more information on the Fog and upcoming events, visit http://www.fogrugby.com.