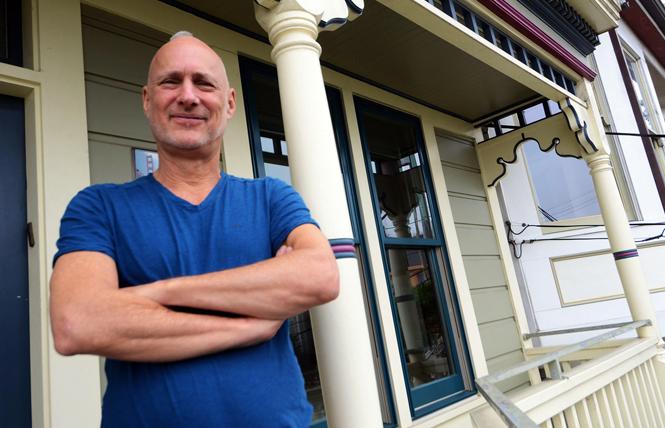 Since listing a spare bedroom in his Bernal Heights home on the LGBT-oriented short-term rental site misterb&b, San Francisco resident Alan Lessik has met other gay men from around the world. Some of his guests have become friends he has visited in their home countries.

"I love being an ambassador for San Francisco," said Lessik, who started renting out a bedroom with shared bath a decade ago in order to supplement his income working for a nonprofit. "San Francisco is an expensive place. I had a roommate already and was using the other bedroom as an office, so I thought let's see what it would be like to rent it out short term."

At first he was doing it himself through his own website at http://www.bernalview.com, which he continues to maintain and draws mainly straight tourists or parents coming to visit their children who now live in his neighborhood. Three years ago he discovered the French-based misterb&b site, and having had positive experiences using a German site targeted at gay tourists, decided to try it out for himself.

"I was going to Europe and seeing the city I was staying in in a way I wouldn't otherwise and meeting other gay folks," said Lessik, 65, a medal-winning figure skater at the Gay Games who is now retired.

When he returned to his home, which he bought in 2000, Lessik listed it on misterb&b. (He currently charges $99 a night via the site.) Of the roughly 70 people he hosts annually, about half find him via the LGBT listing service.

"I meet folks who have now become my friends. It is pretty intimate to stay in someone's home," said Lessik.

He has a few rules, such as no smoking in the house and no inviting strangers over. He also makes clear to his guests that he is not running a bed and breakfast, thus he doesn't get up to cook them breakfast. They are welcome to make use of his kitchen on their own.

He never thought about using Airbnb because of the company's adversarial tactics with local governments. Plus, prices on the site tend to be higher than what he charges.

"On Airbnb people charge an arm and a leg. If you charge prices like a hotel, people will treat you like a hotel," he said. "This is a home and I want people to enjoy it. It is also an opportunity for people who don't have lots of money to come to San Francisco."

When misterb&b CEO and co-founder Matthieu Jost launched the site in 2013, he, from the beginning, wanted to work cooperatively with local governments and adhere to their regulations on short-term rentals. In San Francisco, for instance, the site worked out an agreement with the city, so that since September it has been collecting the taxes on short-term rentals for its 1,300 hosts in the city, who previously had to pay the tax themselves.

"From the beginning we said it would be very important for us to be legal, especially in San Francisco as it is an important city for us," Jost told the Bay Area Reporter in an interview via Skype. "They need to get a license in San Francisco if they want to be a host. You are not able to list your place on our platform without any valid license number."

Jost, 37, a gay man who lives in Paris, said that misterb&b now works with hosts in 135 countries around the world. In the United States the company has 220,000 hosts, by far its largest market, and aims to reach 300,000 hosts across the world this year.

"I wanted to launch this service after my personal experience of being rejected by a straight host on a mainstream platform," said Jost, who had been operating mister10, one of the top-rated gay travel websites in Europe.

He teamed up with Francois de Landes de Saint Palais, a co-founder of the French short-term rental site Sejourning, to launch misterb&b — he serves as the site's COO — focused on the country's gay community. Within three months they had gone live with https://www.misterbandb.com/ but quickly realized they needed to reach a global audience in order to have a viable business.

Turning to venture capitalists, misterb&b raised $2.5 million in 2015 and since then has netted $13.5 million in funding and now employs 60 people. At some point Jost would like to take the company public, but that is still years away.

The majority of the site's rentals are for private rooms in someone's home with the owner of the house present. The site charges hosts a commission of 3 to 7 percent depending on the type of place they are renting and a 12 percent charge for guests.

"The idea for us really is we help our community to connect with each other across the world," said Jost.

The site debated whether to restrict its use in countries hostile to the LGBT community. But after talking with gay men in Russia, they opted against doing so and instead took some precautions to ensure their safety, like hiding their true identity.

"They told us it was very important for them to host other gay guys from across the world and connect with other gay guys. Because, in their own country, that is very hard for them," said Jost. "We are helping them connect to other gay guys and make some money."

To foster a safe experience for guests and hosts, misterb&b requires users to create a profile with their photo and have some form of identification to verify they are who they say they are. It also does not share or sell any data about its users, said Jost.

"This is very important for us. We don't sell any data to any advertisers," he said. "This is not our business. We are in the short-term rental business and not making money from advertisers."

About four to five times a year Jost will stay with hosts on the site without them knowing whom he is to assess for himself how things are going.

"That is really important if I want to have feedback," he said. "What I like is all the negative feedback to develop a better experience with our community."

One change the site has made since it went live is expanding the information that hosts can list on their profile about both their accommodations for rent and themselves. It does not tolerate any harassment and bans users who do.

"The idea is to really help our community to know each other better before staying with them," said Jost.

He stressed that misterb&b is not looking to be a matchmaking service for gay men.

"We are not a dating site, we are a travel site," said Jost. "Today, there are thousands of free gay dating apps where you can connect and find your loved one. I don't think our traveler wants to pay $300 to $500 to meet the love of their life."

Lessik said he has never had an issue with a guest who made him uncomfortable due to unwanted sexual advances. Rather, he has hosted a straight couple from Colorado upset over his campaign sign in support of former President Barack Obama and one male guest who drank heavily.

"Occasionally, I will get inquiries that make me realize the people are looking to have sex. I push those off," he said.

Lessik rents out his spare room, which is off his living room near the front door to his house, up to 30 days. The most anyone has stayed with him was for two weeks.

One difference he has noticed over the 10 years he has welcomed travelers to town is that there is no longer a lull in room stay requests.

"It used to be busy from April through November," said Lessik, who always is home to greet the people he rents to. "Now, it is busy year round."

Due to term limits Yeager, the first LGBT person to serve on the county board, stepped down last year. A trailblazing out politician in the South Bay, he is expected to run for state Senate next year.

The South Bay's LGBT business group will present Yeager with its Lifetime Achievement Award. It will also present its Impact Award winners at the luncheon, which is sponsored by Kaiser Permanente.

Tickets can be purchased online via the chamber's website at http://rainbowchamber.org/.