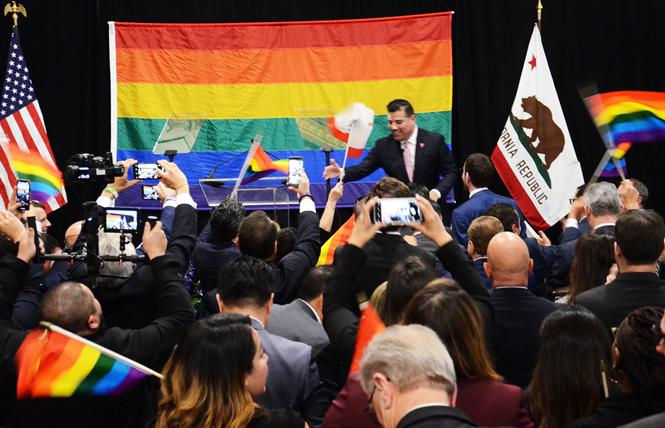 At a ceremony that put the historic significance of his swearing-in front and center, Ricardo Lara took his oath of office as state insurance commissioner Monday to become California's first LGBT elected statewide officer.

Gay retired U.S. District Judge Vaughn Walker, whose historic ruling in a federal same-sex marriage case paved the way for marriage equality to return to California, administered the oath of office to Lara at the January 7 ceremony in downtown Sacramento. Lara, 44, who stepped down that day from his state Senate seat, took his oath as the eighth insurance commissioner since voters created the position in 1988 on a facsimile of the state's first Constitution from 1849 in its original Spanish translation.

By winning his now historic campaign to succeed Dave Jones, Lara broke through a rainbow political glass ceiling no other out LGBT candidate in the state had been able to do over the last two decades. He defeated former insurance commissioner Steve Poizner, in a nail-biter of a race that took weeks to determine.

"To my fellow Californians: A people's progress is often measured in thresholds crossed. In the nearly 170 years of California's history, hundreds of men and women have been elected to serve in statewide constitutional office. Until now, not one of them was openly gay," said Lara, the son of Mexican immigrants who raised four children in Los Angeles County. "As I cross this threshold, I am overwhelmed with gratitude for all those who have made this possible. I am standing before you, but I am surrounded by the spirit of those bold, unapologetic, and courageous people who protested and ultimately gave their lives so that I could live proudly."

Lara credited the protesters of police harassment at gay bars the Black Cat in Los Angeles in early 1967 and the Stonewall Inn in New York City 50 years ago this June. And he recognized the late gay San Francisco Supervisor Harvey Milk, whose election in 1977 made him the first out gay elected official in the state, by having his gay nephew, Stuart Milk, be one of several speakers to introduce him to the standing-room-only crowd at The Bank event space not far from the state Capitol.

"There is no doubt that your uncle is here with us today," Lara said in thanking Stuart Milk for his remarks. 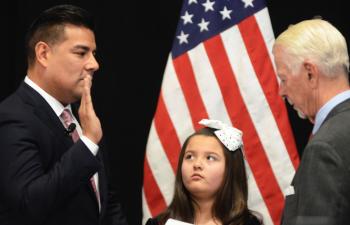 Ricardo Lara, left, was sworn in as California's insurance commissioner by retired U.S. District Court Judge Vaughn Walker during a ceremony in Sacramento. In the center is Lara's niece, Isabella. Photo: Rick Gerharter

Former state lawmaker Art Torres, who came out of the closet in 2009 after leading the California Democratic Party as its longtime chair, called Lara "our own Latino Harvey Milk." Torres, who lost his own bid to become state insurance commissioner in 1994, served as the master of ceremonies for the swearing-in.

"Ricardo has the same passion for justice as Harvey did," said Torres, who now serves on the oversight body for San Francisco's public transportation agency.

The City by the Bay was well represented at the ceremony. Members of the Alexander Hamilton Post 448 for LGBT veterans served as the color guard.

Lara wore a pink triangle lapel pin given to him by Patrick Carney, who each year during the city's Pride weekend in June oversees the installation of a giant pink triangle on the side of Twin Peaks above the gay Castro district. It honors the gay Jewish men and others made to wear a pink triangle in the Nazi concentration camps, many of whom where killed during the Holocaust.

At his inauguration, Lara gave his guests pink triangle pins he had designed that bore his name, office, and the state along with the image of a grizzly bear in the middle of a pink triangle. Included with it was an explanatory card of the symbol's significance for the LGBT community.

Once done with his speech, which was briefly interrupted toward the very end when a woman fainted, a rainbow pride flag was unfurled behind Lara and Lady Gaga's gay anthem "Born This Way" began to play. San Francisco resident Tom Taylor, a longtime friend of the late gay rights activist Gilbert Baker who co-created the very first Pride flags in 1978, had donated the flag for the ceremony.

"I already miss him in the Senate, but he is going to do great things for the people of California," said Wiener.

Gay former Assembly Speaker John A. Perez (D-Los Angeles), who fell short in his own bid to be elected to a statewide position in 2014, said he was struck by the ceremony's "beautiful expression of the history being made."

In addition to being "incredibly excited for Ricardo," Perez said he also found it "so touching" that Lara had "really harkened back to all those that made his election possible."

Lara's "breaking of the pink ceiling was a fun way to put it," said lesbian Assemblywoman Susan Talamantes Eggman (D-Stockton), who purposefully wore a pink cashmere sweater with a cranberry pantsuit to celebrate the occasion.

During his first speech as insurance commissioner, Lara announced he was creating the agency's first deputy to oversee climate and sustainability issues. He also pledged to help the numerous California residents whose homes and livelihoods have been devastated by wildfires to rebuild.

And he said he would work side-by-side with Governor Gavin Newsom to implement universal health care for all residents of the state. It was an issue he pushed in the Legislature.

"To Governor Newsom — I am excited to be your partner in expanding affordable health care for every Californian," said Lara. "There is nothing we cannot achieve with our new common agenda."